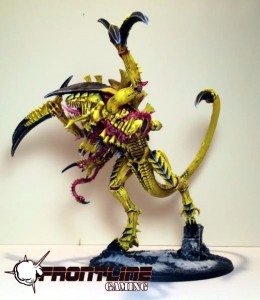 Hello everyone this is your resident Hive Tyrant Geoff “iNcontroL” Robinson wanting to give you all some feedback on what my experiences have been like with the big nasty Forge World monster the Dimachaeron! Check out the Tactics Corner for more great reviews. 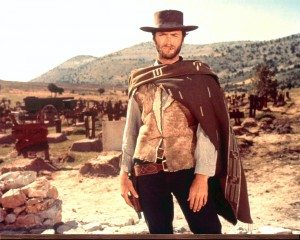 The Dimachaeron comes in as the best close combat option Tyranids have. He has high WS at 8, he has high I with 6 and his attack profile(s) are designed to be bad news bears for anyone. Either he is putting out a lot of strength 7+ ap2 attacks with the ability to possibly consume another model for some 4+ FNP token(s) or he is throwing out 3~4+ instant death wounds that render things like a Wraith Knight almost completely useless. This makes him a meat grinder for troops AND an assassin for those high priority targets.

As a close combat choice there are few better. With adrenal glands and the +1 str from the grasping talons attack he can even be swinging at strength 8 on the charge which gives him double out power on tough 4. Funny enough, with his “rampage” which gives him D3 attacks when outnumbered I often found the worst part about his grasping talons attack is that he often kills everything he comes in contact with and the consume attack strikes at initiative 1 so he sometimes just flat doesn’t get it because he did too good of a job killing stuff!

The way I have eventually learned to use him is as a big scary stick that you wave around menacingly. He has his weaknesses which I will get to but for the most part he is a damn intimidating model. Volume of attacks and access to a lot of instant death options makes him scary for non Imperial Knight units. Have him escort the bulk of your army and couple him with a Malanthrope or two. He will devour drop pod marines, ward off Wraith Knights entirely and is a very real threat to just about anything else outside of high initiative ID attacks or Imperial Knights.

Perhaps his best quality is he is only 200 points. In almost all of my games (thanks Seer Council) he has killed 2x/3x his cost.

Not everything is gum drops and rainbows with this big nasty.

He is slow. In a world where a lot of the really strong CC units move very quickly with either the ability to access teleportation, transports (pods, ravens, rhinos etc) or just being fast like the Wraith Knight’s 12′ movement you have the Dimachaeron.. an actual FAST ATTACK choice slogging it up at 6′! But wait! HE CAN LEAP! This sounds vaguely like the old Hormagaunt rule which added 3′ or something along those lines right? No. He can just flat move 6′ or charge a flat 6′. This makes him nice for 6 inch charges or less but he already comes with fleet from adrenaline so the odds of you failing a 6′ charge are very very low. The good news about this is his speed basically means you need to keep him with the rest of your army and that is frankly, where he belongs. I will get more into that on the “ugly” side of things below.

The Dima’s devour attack is a bit odd. It SEEMS really great. 4+ FNP after eating a guy for an extra attack? Str 10 ap1 auto-hit ID attack is the bees knees.. but why initiative 1? This means those things that wanted to hit you and can are going to. So, either he is slogged by a bunch of gibblies in which case this is the best scenario you can hope for. There is a good chance they do no damage and you will get that 4+ FNP token OR you are facing terminators, powerfists or other initiative 1 attacks that are almost guaranteed to do some serious damage. The best defense the Dima has is it’s high WS which can thin the field. Couple this with paroxysm and you are maybe getting those weapons to hit on a 5 and of course wound on anything but a 1. I also try and give him “catalyst” if you have that available as another defensive buff. This isn’t the end of the world but I would have liked to have seen this attack come in with a faster initiative so it can reliably buff up the Dima AND prevent it from taking more damage.

Overall him being slow has not been as big of a deal as it sounds. He should be running each turn with re-rolls due to adrenaline and this means he is moving at roughly 9~10/11 inches a turn. He can’t charge after that of course but with the flat 6′ “leap” as long as you have defended him correctly with the Malanthrope / other targets etc.. he will get into that CC mostly intact and he will wreck face. 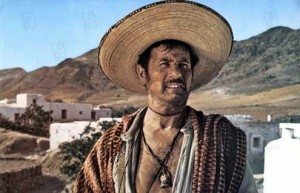 He isn’t fearless. This.. this HAS to be a mistake. All the Tyranid MCs are fearless. Not just from Synapse but literally from the model itself. Basically what this means is if he loses synapse he can be ran down. A big, giant, bad ass assassin can literally turn tail, run and then be destroyed. Wat. There is no reason in the fluff that I could possibly think this makes any sense at all. He is even derived from the Hive Tyrant genetic design.. this is Chaos Space Marine level bad, guys. The frown being turned upside down here is that is OK(ish). He needs to be with the Malanthrope anyways for protection and thankfully that brain bug gives synapse. We Tyranid players are used to the algorithm: Synapse+Tyranid=Happy // Tyranid – Synapse =Dead. Therefor this guy forces us back from our dream state and into a harsh world where Orks kill themselves, Cultist champions demand 1 on 1 time with Marnius Calgar and Chaos Space Marines that have been around for 1000’s of years turn and run.

Bottom line: Is this guy a auto-take? Absolutely not. He is relatively cheap for what he gives at only 200 points and he will almost always earn you those points in spades. That said he is a close combat specialist in a world where Tyranids are no longer geared towards running up the field and devouring their prey at close range. Look, I wish that wasn’t true. I ran the Swarm Lord as much as I could. I got into this game because the Carnifex reminded me of a Ultralisk from Broodwar. That said the Nids soft underbelly is ironically their inability to deal with assault specialists. We can slog you down with gibblies, we can lean on you with a big model that has lots of wounds and semi high strength ap2 attacks. With smash going down to 1 attack, no access to biomancy or other spell trees and with the crippling inability to field genestealers with a straight face we Nids aren’t close combat fellas anymore.. we are short range shooty guys with Flyrants. That said the Dima gives us some more wind in those sails. I run him because I love having assault options and he brings that.

So far every list that can include a Dimachaeron DOES. That may just be me, that may just be for now. If I had to give him a grade I would call him a solid B+ in terms of balance and usefulness. He isn’t a auto-take but he is damn close. If he had a 12′ movement at 200 points he would be a Wraith Knight for Nids.

Outside of game function he is my favorite Nid model. I love WH40k models.. I think they are the best. With that being said my Dimachaeron sits next to me at my desk because I can’t get my eyes off of him. The Frontlinegaming crew did a fantastic job painting him up and for some reason he isn’t very photogenic. All the pics online of him doesn’t do him justice. See one for yourself!

Thanks for reading! I hope you find this useful. If you are interested in checking out more things about what I do you can follow me on twitter at EGiNcontroL and I stream mostly high level SC2 games on Twitch.tv/iNcontroLTV — until next time!