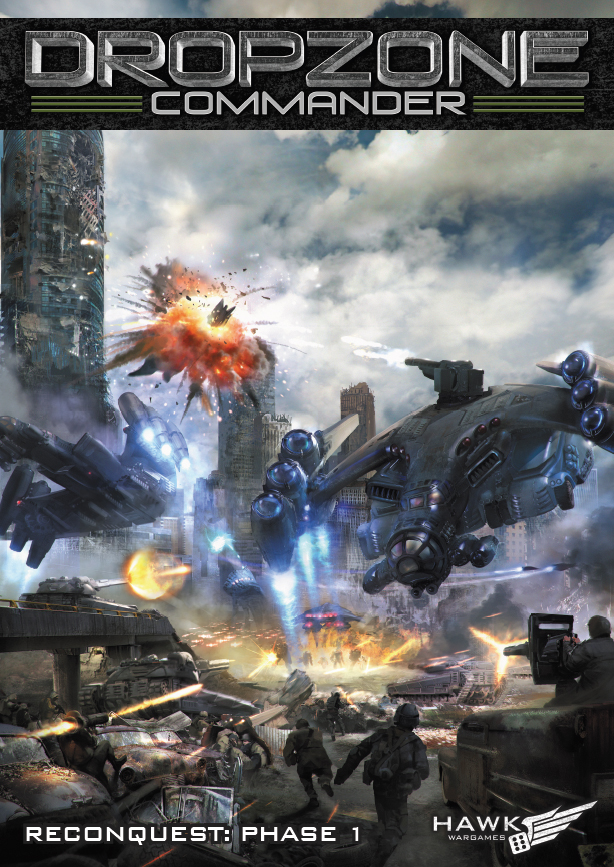 TinBane here from Australia with some first thoughts on the newly released first expansion for Dropzone Commander – Reconquest: Phase 1. Unlike the US, our DzC distributors (the guys who ship to people like Frontline Gaming) seem to have their shit together and these products are just starting to arrive in player’s hands over here. So what’s in the new book, is it any good and how will it change my games of DzC?

Reconquest: Phase 1 introduces the resistance, a new race of tough as nails humans who live under the bio-jackboots of the scourge invaders, new missions, final rules for the last set of experimental units, and famous commanders. We’ll cover the new faction, changes to experimental units, and also a couple of hints/clues as to the future of DzC glimpsed from some rules. Check out the Tactics Corner for more great reviews! Hovercraft are going to be a game changer. They move on full speed on the turn they come in (10″ in many cases), they have relatively high armour (7 or 8) and high damage points. They can’t jump over buildings, but units in them can fire if they don’t use their second embark/disembark move (ie they can disembark then fire, or fire then disembark). This is potentially going to have an interesting list building effect. If you can put some serious firepower into one hovercraft based battlegroup, the activate last/activate first trick means you can get two rounds of firing in, with a 10″ plus peek move. An AA decked leviathan is no slouch either, bringing 8 AA shots at low (for AA gun) energy. Coverage isn’t disappointing, although it makes it an expensive transport. The lifthawk is competitively priced (similar to the harbinger) for it’s options, although 4+ on it’s AA gun makes it a weapon likely best used in opportunities against light dropships.

The breaching drill is a very interesting option. It deviates, you have to pay for it, and if they all die then any units not yet deployed are out of the game. However it may get you AA guns right into the enemy’s face! The feral only barrel bomber looks like pure win. Sure, it’s rare. But this is going to give your opponent a hernia when used properly. Immediately, it sticks out as a winner of building based missions. The goliath bomb deals structural damage as yet unseen in DzC! Sure, it’s limited 1, but you can follow it up with two frag barrels into the same building over the next two turns!

The hellhog fast mover, looks like an interesting unit as well. It’s able to start a fast mover attack, and convert into gunship mode instead. In exchange for taking away it’s paltry AA armament, for no cost you can remove the L-2 from the “Satan” chaingun. Believe me, you are going to see this option in play! Cheap gun and rocket technicals, are going to allow the resistance to out “wolverspam” the UCM! Rocket based technicals are priced sharply, to make building destruction a little more pricey, and gun technicals have a new low in energy for AA shots, however at this price, and seeing as they can deploy via drill, you aren’t going to complain. Your opponent is unlikely to want to chance it against these cheap, light units. Focus 2 means that massed rocket technical is going to start stinging if let to build up, it’s possible that mass reliance on shaped charge might be a better bet (I’m guessing math will prove focus-2 a better choice, certainly against multi-hit opponents). Check out the accuracy on both technical options. The various wagon options haven’t been examined closely online, but they are looking really good! 2+ AA makes these ground based units VERY nasty. It will be interesting to see how well 2 damage points protects them and whether it’s worth the lack of counter measures. Gun Wagons are a standard choice, allowing you to mass spam hovercraft based AA units.

The hannibal is a tough unit, but ultimately it’s a heavy with a single E10 shot at 18″ countered. It’s a nice cheap option.

The Zhukov is probably your go to heavy. These rare heavy AA railgun tanks are going to pile hurt onto enemy units, though at 75 points they are pricey! The most interesting units though, have to be the Jackson (a light, ground based APC halftrack which can boost CQB nearby), the Alexander “super heavy” command tank and the Thunderstorm custom command hovercraft. Using small APCs to help you win CQB battles, is going to be a very interesting point of difference. It looks like the resistance command units are going to very much lead from the front, potentially as a kind of spearhead. The combination of cheap units, drill deployment, and generally hardy (for their points) units means that Resistance is going to be an extremely successful force aimed at overwhelming the enemy forces. Fighting the resistance, you may find yourself moving into territory that is already filled with infantry in buildings from drill deployment. Small arms fire from forward deployed infantry, combined with good cheap AA, may make the resistance a hard counter to light dropship based snatch and grab lists. Resistance lists are going to be extremely flexible, they have a great depth of units, some incredible generalists, amazing specialists, and a some as yet unseen (in DzC) reactive deployment methods. On page 74 of reconquest, under the rule “Armoured Fist” the prices of several UCM tanks are adjusted to represent their better availability under the special tank commander (or perhaps to partially offset the price of being forced to air mount most EVERY units). Gladius tanks under this commander will reduce in price to a state above their current price, while scimitars will get a 20% discount based on current points costs. Sabres are priced slightly below their current price, which either indicates a small discount or they might be gaining a point or two in cost. This may indicate that scimitars are taking a bigger points break as an update to the core rules, which might make them more playable, although I don’t think it will “fix” the unit.

The Scourge, UCM, and the PHR heavy list absolute prices for their units under their special commanders, while the PHR light and Shaltari use relative prices (ie 5 points cheaper, rather than saying something will cost X end price). Which may indicate that PHR heavies, UCM, and Scourge units will have a price change.

The production of this book is a step up. Hats off to Dave and the team (especially the new artist, Patrice), the layout, design, fluff and artwork is a step above the core rulebook! Beautiful though the model diorama shots are, the hand drawn artwork is simply stunning. The evolution of the timeline (some 250 days after the core book) and the continued development of some aspects of the fluff (such as examining the PHRs motives) really take Dropzone Commander from an impressive “one man show” to a varied, and skilful team. Looking forward to their next set of releases and updates!

Posted on September 8, 2014 by TinBane in Dropzone Commander