The Assassins are here! And they are pretty amazing!

You are here: Home › 40K › Tactics › The Assassins are here! And they are pretty amazing! 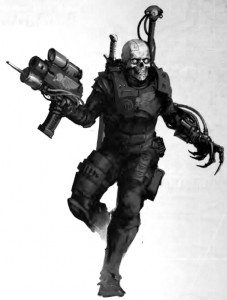 Hey everyone, Reecius here to review the Assassin Dataslate. Check out the Tactics Corner for more great reviews!

So first of all, folks are still a bit confused on what that exactly means, so to be clear, the dataslate is a digital rules source that gives rules for a new Faction. And yes, they are a Faction of their own (Officio Assassinorium Faction), and included in the Armies of the Imeprium and as such are battle bros with all other Imperial armies.

In either case, you get a bonus VP if your assassin kills the enemy warlord. Further, in the Formation, the assassins gain Preferred Enemy: Warlord. They always act alone, too, and can never be joined by another model. They also ignore the penalties for charging through cover as well. Cool and fluffy, I dig it.

All of the assassins have a respectable statline of WS8, BS8, S and T4, W3, I7, 4 attacks and LD10 with a 4++. Not bad! A nice little boost over what they had previously. They also have the No Escape special rule that makes enemy LoS! rolls suffer a -2 penalty. For (Ch) characters that means they pass on a 6, for (IC) characters they pass on a 4+. 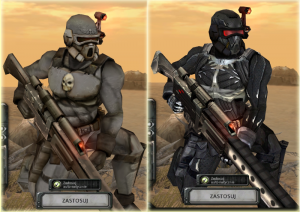 The Vindicaire is first out of the gates weighing in at 50pts over a Thunderfire Cannon. He comes with Blind Grenades, a CCW, a Spy Mask, his Exitus Rifle and Pistol. The Mask gives him Ignores Cover except when snap firing.

The Rifle and Pistol are AP2, Poison, and have special ammo. The rifle has a staggering 72″ range while the pistol is 12″. Plus, all of his shots are Precisions Shots. Not bad!

The special ammo is similar to what he had in the past, but slightly different. Shield-breaker ignores invul saves, Turbo-penetrator shots are strength 10 versus vehicles and cause D3 wounds against toughness based targets, and Hellfire rounds wound on a 2+. That is pretty dang versatile. You can use that to target key models in a unit and try to take them down, such as the Baron, a model with an important power or piece of wargear, vehicles, Monstrous Creatures, etc. With Infiltrate and massive range, he can safely park in the backfield and take pot shots on enemy models, relatively safe.

He comes with Infiltrate, Stealth, Fearless and MtC.

The Vindicaire is a really solid model and just for his MC and vehicle busting alone, he is worth his points. His other abilities are just gravy. 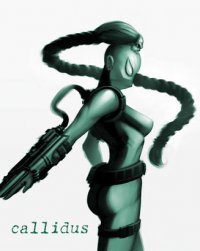 The Callidus is up next! She weighs in at 5pts less than the Vindicaire.

She also comes with Fearless, Infiltrate, and MtC, but she also has Fleet, Hit and Run, and Precision Strikes. When she Infiltrates though, her Polymorphine allows her to do so as close as 1″ away from the enemy or to come out of Reserves behind the enemy, ala Snikrot. In either instance, in the first turn she can only be hit by Snap Shots, which is pretty fantastic! Templates and Blasts can’t impact her on that turn, all other shots hit on 6’s. Nice little ability to keep her alive in the early game.

Her Reign of Confusion ability also allows her to reroll the Seize roll similar to Coteaz, which is great, and it gives your opponent a -3 to reserves on their first reserve rolls. That is really useful for armies that only reserve a key unit or two such as a Heldrake or Vendetta, etc.

Her wargear is cool, too. She has a Neural Shredder that is a template pistol, AP2, wounds on a 4+. Not bad, especially when you consider she can infiltrate 1″ away from enemy units! You will wound 50% of what you hit which against armies like Tau, or certain Marine builds like Grav Cav, etc. can be devastating if you go first. You see where they deploy, put her right next to a vulnerable target and splat!

In melee she sports a Phase Sword that is essentially an AP2 power sword that ignores invul saves on a to wound roll of a 6. Not bad at all. This can be great if you get luck vs. things like TH/SS Termies, Farseers, the Baron, etc.

Her secondary weapon are her Poison Blades, which are melee, Poison 3+ and Rending. The two of these together (or her Neural Shredder) grant an extra attack as well.

The Callidus is a solid backfield disruption unit that starts in the backfield! Not bad. You can either go for the alpha strike and hit them hard if you go first, or, reserve and come in behind them and do the same thing. She will be great for picking off weak units, and support units and in general being annoying with her speed, and Hit and Run. 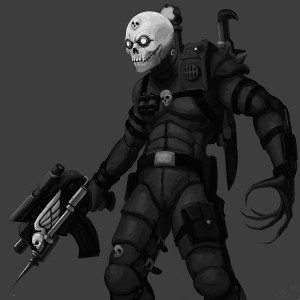 The Eversor assassin is up next, and my favorite. Not my favorite for his rules per se, but because I love his look and fluff. An insane, murderous ninja hopped up on goofballs is just too cool! He is also the cheapest, at just 35pts over a Thunderfire cannon.

He is also Fearless, has infiltrate (finally!), and MtC, but he also has FnP (nice!) and Furious Charge. Shame he doesn’t come with Fleet but with his special rule granted by his Frenzon drugs, it may have been too much. Frenzon grants him a 3d6″ charge range and +3 attacks on the charge for a mighty 8! He also explodes when he dies for lols, at strength 5 in a D6″ radius.

His Fast Shot rule grants him 4 shots with his combi Bolt/Needle Pistol (the Needle Pistol is 12″, Poison 4+) and he can fire overwatch at full BS. He can mix up the shots between Bolt Pistol or Needle as he desires.

The Eversor sports a Power Sword, Melta Bombs and a Neuro-gauntlet which is a melee weapon with Fleshbane and shred…just in case you rolled a 1! Haha.

The Eversor is a light infantry lawn mower. He can wade through MEQs fairly well, too, with 8 WS8, Str 5 attacks on the charge. His ideal target is larger units of light or medium infantry that do not have the ability to kill him in a single shot (Power Fist). He is relatively safe here and his speed and bucket of attacks will cut them down in short order. He is also fairly resilient with a 4++ and a 5+ FnP. Now that he finally has infiltrate, he can begin the game in a good position, and almost certainly get a turn 2 charge. His array of weapons makes him a threat vs. pretty much any target be it vehicle, MC or infantry. Just be wary of things that can one shot him. Honestly, he is probably the least powerful of the assassins, but for a relatively low price point, he can really harass the backfield well and attack many MCs, vehicles, even fast ones like skimmers, with his big charge range and mass of strength 5 attacks or his Melta Bombs.

The Culexus is up last and is the most exciting of the assassins. He is a game changer! Weighing in at 40pts over a Thunderfire cannon, he is also quite reasonable for what you get.

As per usual, he is Fearless, Infiltrates, and has MtC. He also comes with Preferred Enemy (Psykers). On top of this, he has a boat load of unique special rules. His melee attacks ignore armor saves full stop and cause ID on a to wound roll of a 6, and against a psyker, all of his melee attacks are ID. His Etherium special rule is nuts too, all attacks against him are resolved at WS and BS 1! WOW. That really helps to keep him alive. Enemy psykers assaulting him (so long as he is not locked in assault already) do not get their bonus attack for assaulting.

The game changer though, without a doubt, is his Psychic Abomination rule. Holy crap does this change the meta. The Calexus has a 12″ radius debuff that causes all Psykers within it to suffer a -3 to their leadership, generate no warp dice, only harness Warp Charge on a 6, prevents the Calexus from being targeted or affected by psychic powers, and turns off all Blessings and Maledictions….holy crap!!!

That is just like, mind blowingly good. He essentially grinds the psychic phase to a stop within his bubble. Why this is so good is because a lot of the top tier lists in the game right now rely on psychic buffs to create deathstar units. Powers like Invisibility, Fortune, Guide, Prescience, etc. all just go poof! in the Calexus’ AoE. Daemon summoning got you down? Not anymore. Iron Arm too good? Kiss it goodbye! It also shuts down the tricks psychic heavy units have once they are within his radius. Gate for example, is most likely not going to allow a unit to escape once the Calexus has them in his sights.

The trick is getting him into position as any player with these units will throw everything they have at killing him before he gets into range. You can lean on his Etherium rule to survive, or stuff him into a durable, mobile transport vehicle to increase his radius and get him where he needs to be.

Further, he also comes with Psyk-out grenades which are a str2, small blast that if it hits a unit with a psyker, the psyker suffers a perils (and remember his -3ld debuff, too!). His Animus Speculum is basically a psychic machinegun: assault 18″, str5, ap1 that gets one shot per Mastery Level of all psykers within 12″ of him, plus up to 3 Warp Charge from your own pool. He can quickly stack up an impressive number of shots, and I imagine some players will add in some cheap psykers top their list to follow him around for just that purpose.

This guy is a game changer, pure and simple. He has the power to absolutely shut down certain deathstars which IMO, is nothing but a good thing.

In all, the Assassin dataslate is a nice addition to the game and gives players a lot of fun and useful tools in the tool chest. I think the Formation will be a ton of fun, if not the most competitive choice. At 570pts it isn’t crazy expensive, but it is a healthy chunk of points. You do get a fun mix of units though, and I will certainly be trying it out!

79 Responses to “The Assassins are here! And they are pretty amazing!”