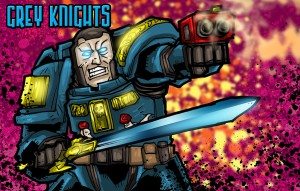 Darklink brings us a Grey Knights Review: GKs have been my main, and just shy of exclusive, army for many moons, so I’ll go over everything in it. I’m not exactly pleased, but at least I know how Tyranid players feel. If GW wanted to teach me a lesson in empathy…

As always, check out the Tactics Corner for more reviews.

1. Daemonslayer gives you Hatred: Daemons, and lets you cast Banishment (and only Banishment, no other powers) on a 2+. Draigo has this by default.

2. Hammer of Righteousness: Warlord and Unit gain Hammer of Wrath. Kinda cool, but GKs wreck face in assault normally in the cases where they actually want to be in assault, so it really doesn’t matter much.

4. First to the Fray: Actually kinda cool. Warlord and unit reroll scatter and deepstrike T1. Neat, but you only rarely get it and the rest suck.

5. Perfect Timing: Warlord and unit get Counter Attack. Kinda cool, Not terrible, at least. But trust me, having Counter Attack constantly available via The Grand Strategy in the 5th ed codex, and it really isn’t anything special for GKs. Your Warlord is usually part of a unit that everyone runs away from in terror already, unless you take one of the non-combat HQs that you want to keep out of assault, Counter Attack or no.

6. Lore Master: You generate one more power from Santic Daemonology than normal. This denies you Psychic Focus, so unless you planned on rolling all on Santic anyways, not a very good deal, and since you already have most of the Santic powers scattered through your army already, WTF would you want to roll on Santic with your one shot at Divination or Telepathy? Sounds good, really isn’t.

Basically everything is either nerfed or more expensive. Swords lose the Invulnerable save bonus, Halberds are still decent but with +1 Str instead of +2I, but they now cost everyone points to upgrade which means they’ll rarely be worth taking. Staves are only good for getting Adamantium Will in a unit, otherwise they’re terrible. Since offensive psychic powers are pretty crappy against GKs already, probably not worth the points most of the time either. And Hammers are still great, same as before, but now everyone costs 10pts to upgrade to them, which is a huge hit to Terminators and Paladins (at least Terminators are cheaper, but getting the hammers you need into the units will erase most of that point discount, so meh).

Psycannons are Salvo, so they’re utterly worthless on power armor guys now. Still good on Terminators, and the Heavy Psycannon is awesome with the option for Heavy 6 shots in addition to the Heavy 1 Large Blast, but between the loss of Psybolt Ammo and crappy Salvo Psycannons, power armor GKs are pretty crappy now.

Psilencers gained Force, but before anyone gets too excited remember that they’re still Str 4 with no AP, which means they won’t actually be putting any wounds on Riptides or Wraithknights, rendering Force utterly pointless. Still terrible.

Incinerators now have Soul Blaze, and they’re still a better Heavy Flamer, so that’s cool, but GKs are already good at killing stuff up close. They’re cheaper for most units now, too, so you might see some, say, Interceptors with them, but otherwise there’s nothing much to look at here. Terminators and Paladins will still take Psycannons, and power armor GKs will still mostly sit on the shelves.

Psyk-out Grenades can now be thrown as a small blast at Str 2, and cause a Perils if they hit, which is pretty sweet.

Brotherhood Banner: Still +1A, now reroll failed morale in 12”. Except I think only Paladins can take it now.

Nothing gamechanging here. The armor one gets you FNP and IWND, which is pretty cool, but you can’t get it on Draigo so meh.

Now for the units:

DRAAIIIIIIGGGGGGGGOOOOOOOOOOOOOOOO!!!!!!!!!!!!!!!!!!!!!!!!!!!!!!!!!!!!!!!!: Supreme Grand Master Lord Kalgor Draigo, Knight of Titan, is still a boss. Cheaper, now has AP2, makes Paladins Objective Secured. He lost the ability to generate powers (no more Precog for him), but has Gate of Infinity which is kinda cool (and if you’ve read Pandorax, this makes sense that he has it). He’s only Str/T 4 now, but Eternal Warrior and the Titansword(+3 Str Ap2) means that isn’t a big deal. He’s now Str 7 and has Hammerhand. The real problem is that he’s a Lord of War. I want to punch whoever was stupid enough to think up this idea. In order to take Draigo, you now have to pay for an HQ and Troops. Draigo’s main thing was taking Paladins, and Draigo and friends are already prohibitively expensive, which means that you basically can’t take them outside of like, Apocalypse. The circumstances in which you will be able to run Draigo are much more limited. BTW, everyone lost The Grand Strategy, which singlehandedly could account for the points decrease for Draigo on its own it was that awesome of a rule. So Draigo went from someone who was a great force multiplier for your army, to someone who is just really good at punching other people in the face. Not exactly a win, but I’ll take a Str 9 AP2 Draigo anyways.

But seriously, characters as Lords of War is just stupid. The lack of FOC swaps is just stupid. No one like Unbound, GW, quite trying to push the poorly conceived mess of FOC shenanigans on us. The only good thing to come of it was army-specific FOCs, which is admittedly pretty cool, but not at the cost of being trapped into taking crappy troops choices to meet minimum requirements and then losing to Objective Secured Wave Serpents or whatever.

BCs are 150pts now, gained a second wound, but lost a ton of stuff and weren’t exactly good to being with. Crowe is kinda good in that he gained IC (finally), but he got more expensive and is still only two wounds. BCs are worthless, Crowe’s a little better than he was but not great. Still gets Cleansing Flame, though, which is awesome.

These guys got a massive points drop. 110 base, 25 for ML3. Can’t get a 2++ in assault now, but this is a solid HQ choice. Cheap warp charges, and access to Divination and Telepathy. Probably going to be everyone’s default HQ now.

Techmarines: Way, too expensive for a single wound model. They were only good for grenade caddies in the previous codex, and with no more 2++ warding staves, rad, or psykotroke grenades, they lost their only raison d’etre.

Terminators: Significantly cheaper. Now, the nerfs to NFWs negate a lot of that, but they’re still cheaper Terminators, and they don’t care about Salvo on Psycannons. Are they good? Well, how many people run cheap CSM Terminators, or SW Wolf Guard in Terminator armor? Yeah… so not bad, but getting a much, much, much needed point decrease doesn’t make them amazing, just better. You can get better results from these guys, but they’re not quite going to carry the codex for us.

Strike Squads: More expensive, and with the loss of Psybolt ammo and the Psycannon nerf there’s little reason to run these poor guys. They’re just overpriced Marines now. They were pretty solid, and now they’re worse in every meaningful way.

Storm Raven: Lost Psybolt Ammo. Lost Mindstrike Missiles, but at least it gets the Str 8 missiles instead, so meh. Pretty good, but significantly less so lacking Psybolt Ammo and considering that GKs are very, very point starved so it can be hard to fit something that won’t be on the table fighting for a few turns into a list.

Interceptors: The unit is slightly cheaper, down to 24 from 26 points per model, but you now have to pay the stupid sergeant tax, so it’s not a big decrease. Lacking psybolt ammo, and with crappy psycannons, the only thing these guys are good for is dropping Incinerators on people for lols, but Dreadknights do it just as well and aren’t overpriced Marines, so there’s not much going for Interceptors.

Dreadknights: Terribl… oh, wait, these guys are actually pretty sweet. They got massively cheaper, and the Heavy Psycannon now can get Heavy 6 shots. They lose the cool reroll-everything from the Sword (which is now, like, Master Crafted or something stupid), but these guys are pretty boss. Now, they’re still as expensive as a Riptide but only have 4 wounds and need to be close to fight, so they’re not actually anything crazy OP, but they’re actually good now.

Dreadnoughts: They got more expensive, and lost psybolt ammo, and don’t have Drop Pods. Why does GW hate Dreadnoughts so?

Purgation squads: They lost Astral Aim, and gained… Night Vision. And psycannons on PAGK are terrible thanks to Salvo. And even if you did want to spam Incinerators or something, at least take Purifiers instead. No one will ever take these.