Launching a Multi-Assault in 7th Edition

You are here: Home › 40K › Tactics › Launching a Multi-Assault in 7th Edition 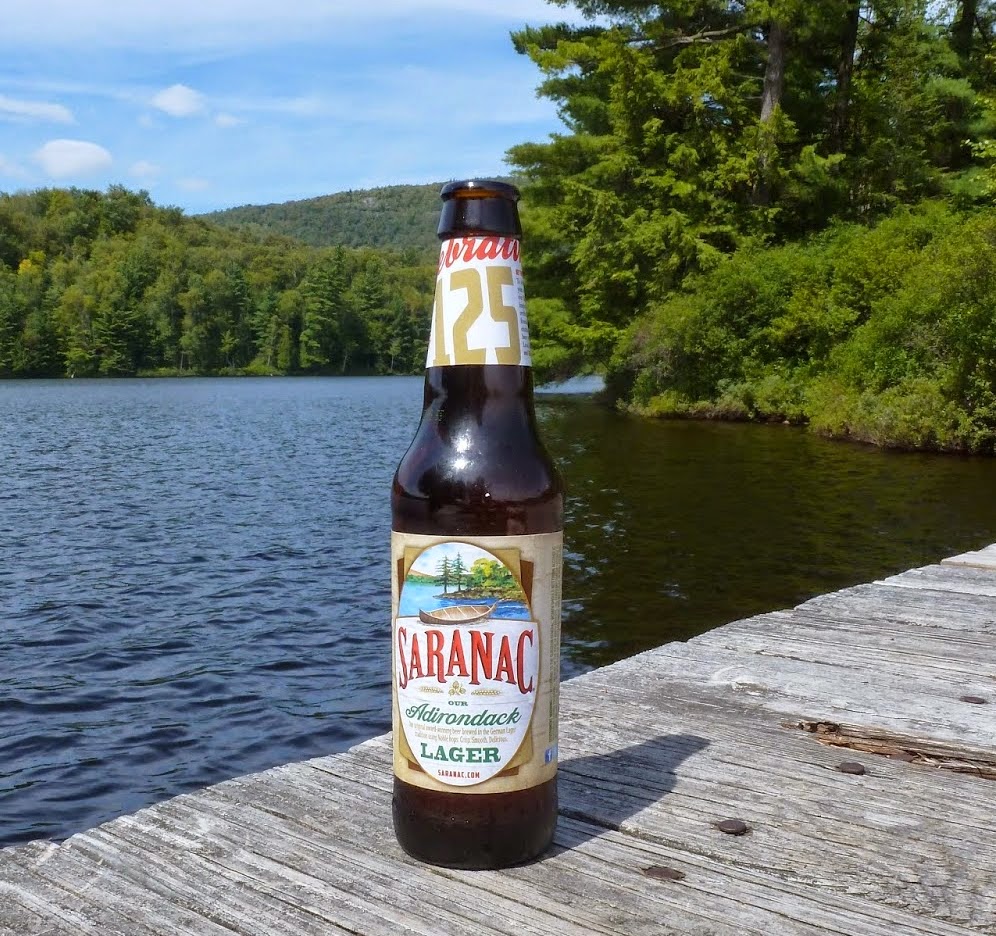 Loopy brings us a review on Multi-Assaults!

In upstate New York, it is so humid that no matter what time of year it is, the only real way to create an optimal situation for spraying primer or clear coat is to drastically change the temperature of a room. So, having said that, while I wait for the game room to cool off with the air conditioner, I have been meaning to write about the following topic.

So, I’ve been hearing a little bit of kvetching about how difficult it is to execute a multi-assault in 7th Edition.  I must agree that it is harder, but I think that, in a lot of applications, it’s not too hard as long as you plan ahead.  Planning ahead is almost always an important element for success in 40k. 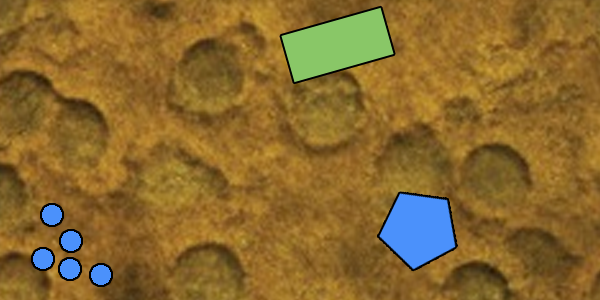 Imagine a Battlewagon full of 19 ‘Ard Boyz (with a Power Klaw Nob) and Mad Dok Grotsnik. These are represented by our green rectangle in the image above.  We’ve also got a Space Marines Drop Pod and a Combat Squad of Tactical Marines (represented by the blue pentagon and circles respectively).

Now, this is a tough situation for your 500+ point hammer unit because you’re not going to waste all that threat on either of those targets alone and you don’t want to kill one and then spend a whole turn getting shot up after you kill the first.  Also, imagine both units are sitting on Objectives… you’re going to want to be able to eliminate Objective Secured units reliably in modern games of 40k, particularly with TacOs (Tactical Objectives).

The answer here is to launch a multi-assault, destroying the Drop Pod (and possibly scoring the TacO under it) and engaging with the Space Marines, hopefully denying them a TacO and tying them up during their turn. 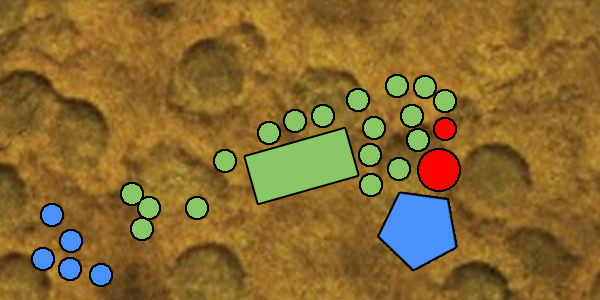 This, of course, is an extreme example.  For some reason, I really don’t want to do any damage to the squad of Space Marines, so I put three models really close to them and stretch everyone else way back using 2″ cohesion and giving myself enough models in the middle so that I won’t strand myself consolidating into my enemy at the end of the phase.

If I wanted more of a gamble, or if I were facing a more menacing close-combat unit, I would have put more Orks closer to the Space Marines, trying to kill more of them and destroy the Drop Pod. Depending on what turn you’re on, this may or may not be the right thing to do.  Late in the game, you may just want to tie those marines up instead of killing them.   That 3+ save is just too reliable to gamble with a few extra Boyz.  Earlier in the game, I’d probably put the Nob in the middle of the pack, hoping to swing against the Marines with him during my opponent’s turn and relying entirely on Mad Dok to kill the Drop Pod. 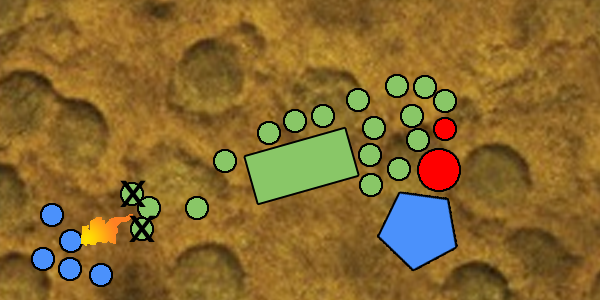 I declare my charge, Space Marines primary and Drop Pod secondary.  The Space Marines are able to melt two of my Orks in Overwatch. 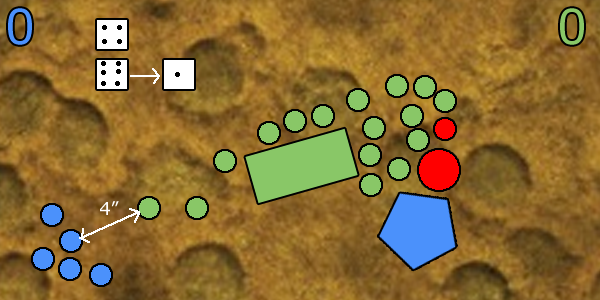 I check the range to the nearest Marine and it’s 4 inches.  I roll a “4” and a “6”.  I do not want to assault too far and ruin my chance of putting a Klaw into the Drop Pod, so I choose to re-roll the six and score a sweet “1” for a total of a five inch charge. 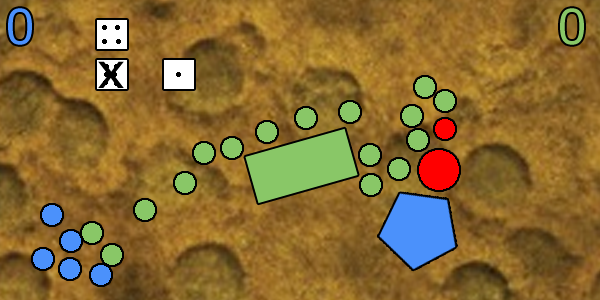 I push my models closest to the Marines into base.  You must satisfy models in base with the primary target first.  In this case, we still need to move models in a conga line in order to maintain coherency as y0u still must satisfy unit cohesion before moving on.

A charging model must end its charge move in unit coherency with another model in its own unit that has already moved which is why it is so important to stack so many models over by the secondary target.  Of course, you can cheat a little bit by moving a far model towards the primary target as long as its final position is within 2″ of an already-moved model.  This gives you more leeway regarding the placing of models on the secondary target.

Once all of your moved models are within unit cohesion, look at the board. Can you move any models into base with the second unit without breaking unit cohesion from the already-moved models? 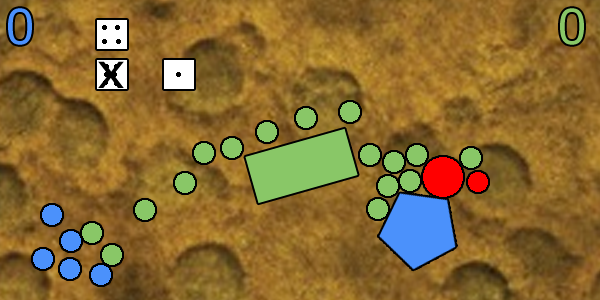 Throughout all, you MUST remain within unit cohesion, even if it means losing attacks against the secondary target. 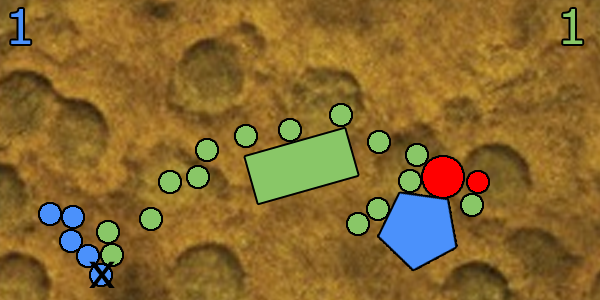 We pile in.  The Space Marines, then the Orks each kill a model in close combat.  I somehow managed to lose the image I made of the Ork casualty, but you get the idea.  You can see how the idea here is to do as little damage as possible to the Space Marines so they don’t flee from combat. 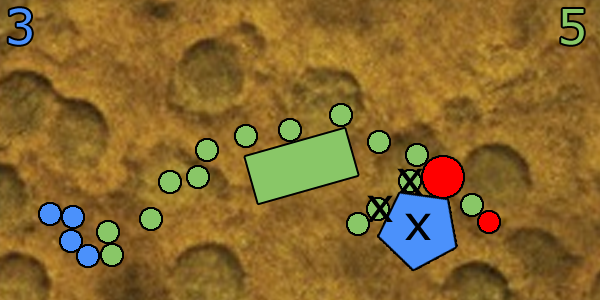 It makes things tougher, though, when the Klaws get into the Drop Pod, however.

The following red section may be contentious due to the still-rather-fuzzy differences between wounds and hull point damage and also whether or not to apply the normal rules for assault wound allocation due to the “assaulting vehicles” section telling us to deal with assault damage to vehicles the same way as with shooting. I am using inference to assume that, for Assault, we use those general Assault rules until the rules on Page 75 tell us not to, just as the shooting damage follows the normal shooting rules until told not to.  As with shooting attacks still firing one weapon at a time, I’d assume that the same goes with assaults and wound pools.  I can’t be sure, though.  There are a lot of assumptions here.

At Initiative 1, the Nob gets 2 glances and a pen while Mad Dok gets 4 pens. I separate the pens and glances into different wound pools by different Strengths, and allocate these one wound pool at a time (Page 51 BRB) with the effects of all of the hits in that wound pool (Page 75 BRB).  It is your choice which wound pool to do first as long as the attacks are at the same initiative.  I could allocate the Nob’s first, then the Mad Dok’s, thus reducing the number I win the combat by.

Please let me know if I am incorrect and make a note of it in the comments below, indicating the page number.

If this is an incorrect assessment, and all of the damage must be taken at once, and all penetrating results must be rolled regardless of wound pool, then I’d probably have placed the Nob between the Space Marines and the Drop Pod in the hopes of finishing off the Marines with the Klaw during my opponent’s turn. 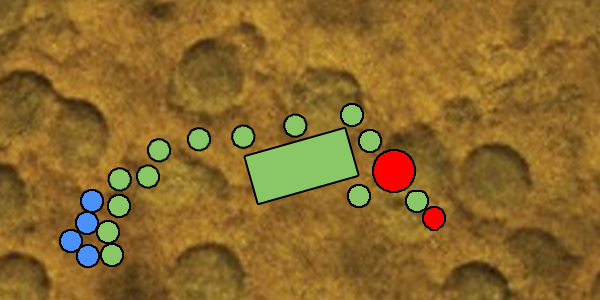 I still have a pretty good chance of sticking in combat with the Space Marines and, even if I don’t, at least I’ll get to consolidate and spread out a bit.

I hope this little tutorial was helpful. This can be done over shorter distances with less models. The important thing is the movement phase and setting up your assaults. Multi-assault is always a gamble, but in the current and upcoming meta with scoring transports, you’ll have to kill the vehicles, but you will not want to be caught piled in around them like a doofus just waiting to get wiped out by some easymode, no-talent shooting army with their Ignores Cover Blasts and Templates.

15 Responses to “Launching a Multi-Assault in 7th Edition”