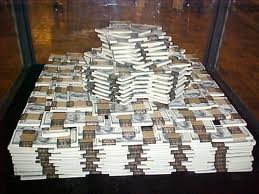 TinBane here, first up the caveat – I’m not an accountant. However I am someone involved in management of a medium sized business, who has a pretty good eye for numbers.

The general news on the announcement of GW’s 2014 sales figures among the community seems to have been that it’s further news of GW’s continued failure. Declarations of the death of GW have existed since the late 80s, when GW “turned it’s back” on it’s existing core customers, to pursue younger markets. Despite that, it’s been (on the whole) making profit since then.

A little context is in order. In the 00’s, GW pushed a lot of product. The number of people playing 40k, Fantasy, and LOTR was increasing, and sales were up. Which was great, until GW ran the numbers, and found they were actually losing money. They were selling hundreds of millions of pounds of product but much of it was sold through the new cut-price online only stores, not to mention the number of new plastic kits being set up, and licensing fees to use the LOTR intellectual property.

This marks a turning point in GW’s history, where a lot of old faces leave the company, and a lot of great ideas fall by the wayside. I’m not telling you this to lament the loss, but when I tell you that from 2000 to 2007 both 40k and fantasy had world wide campaigns every 18 months, and that GW themselves had event managers running 40k tournaments across the globe you can see the difference. The shock of doing so well, and being so successful, and yet still losing money would have given GW a new focus on making sure that they maintain profitability. And this set in motion a lot of the changes that we’ve been seeing (and a lot of the focus of the company).

So, when you see so many numbers going down, why in GW’s annual report (link: http://bloodofkittens.com/wp-content/uploads/2014/07/GW-2014-annual-report.pdf) is the departing interim CEO, Tom Kirby, so upbeat? Is it an attempt to save face? The band playing as the ship sinks? Evidence of a new outbreak of mad cow’s disease in the UK? Or is he actually achieving what he’s set out to achieve?

Tom knew that GW wasn’t going to grow this year, in fact, they haven’t focused on growth. Now that may seem a bit backwards, but if a company is making profit, it is a REALLY good idea to use that time to get your house in order, before you pursue growth. Growth, while massively important for business, is actually a risk. More precisely, it brings with it risks, and the losses in the 00s, are a good example of that. GW’s total revenue increased dramatically and yet their profitability dropped, because the rapid growth (from a burst in 40k adoption, plus LOTR’s success) meant that the company focused on acquiring customers and closing sales, without examining how much it cost to make those sales.

It’s the old joke of having a loss leader, and making up for it in volume.

During the 00s, GW set up headquarters all over the globe. They put on staff and resources across the globe to fuel what they hoped would be their meteoric and profitable growth. We are all familiar with the drop down to single man stores, the loss of local headquarters, the removal of games days. And while we might lament these changes, they might not be as crazy as the internet seems to think. Had GW continued on their course uncorrected, they might have gone the way of Borders: everything seemingly fine and business as usual until all of a sudden they can’t keep up the pretense.

In 2009 (after they recovered from the losses they were making earlier that decade) they had operating profit of 8.9M on 125.7M of gross revenue, which represents a proportion of 7%. When we go and look at more recent figures we see that in 2012 the equivalent measure was 14.5%, 2013 was 15.8%, and this years figure seems to be 9.95%. Wow, so Tom did a really bad job, right? At this rate, GW’s going to be losing money in two years! Steady, Tiger! I’ve just pulled some numbers from high level reports with no context, and context is KEY here.

GW’s actual figures for 2014 were at least 16.8%! Because among their costs were 4.5M pounds to cull middle management, and 4M invested in their website upgrade. That’s a lot of money, to spend firing people! But it can seriously pay off, typically you can recoup those savings (if you don’t have to rehire more middle managers later) in a couple of years. This means that all things considered, if GW have a flat trajectory, they’ll be more profitable (than the 16.8% figure!) next year.

That does actually put GW in a pretty good position. However there is room for concern on several fronts still, from Tom’s comments it appears that the existing executive of GW has failed to grasp one key point: GW doesn’t sell miniatures. Sure, they say they do. Sure, they make their money by selling models (and to a lesser extent books), but as anyone who’s taken up a new game system knows, most people buy into the whole package. Even collectors buy into the community of collectors and painters, but for gamers there is an even bigger impetus here. Without a community playing the game, would you still play 40k, and would you still spend your current spend on it?

GW’s total revenue dropped this year, we don’t have solid figures on where it dropped most, but if I had to pick I’d say that they key contributors is the reduction in service of GW stores and loss of players. Products like the Imperial Knight have been really successful, and the 6th ed release of some popular factions have anecdotally stimulated sales. However we didn’t see growth in response. Now that doesn’t mean a proportional loss, if the proportion of people buying through GW’s stores has dropped.

I’d also suggest that GW’s website upgrade was an expensive waste. The new website needs to stimulate > 20M pounds of sales, or 4 million pounds in internal savings when compared to the existing website to pay off just this lump sum investment. With their gross revenue around 120M including global third party sales, and their massive number of stores, that’s a huge uplift. Reintroducing some strong incentives to buy from GW would have more impact, than whether the site works nicely on mobile.

So did Tom succeed?

Absolutely, all things considered GW is getting better returns on their sales, however if the changes to gross revenue continue it will begin to put GW in a precipitous position. It does however set up Tom Kirby’s replacement to be in a good position to drive growth. It might sound crazy, but improving the profitability could pave the way for a reduction in prices. More likely this would take the form of more aggressive discounts on big boxed sets, and better incentives to buy from the GW site such as limited edition models available only to loyalty members through some kind of points redemption system.

If GW can turn the corner at this point they can grow the hobby, which means more customers and better products. The risk is that the new executive continues to focus on profitability above everything else, and continues to secure bigger and bigger slices of a diminishing pie. If they focus on growth, attracting people to the hobby, and making it a fantastic experience (while keeping a sideways eye on profitability, of course) then maybe we are in for a second (third?) golden age of GW.