Hey everyone, Reecius here to talk about some play-tests with Orks so far and to share what they have revealed for us. As always, check out the Tactics Corner for more great tactics articles and reviews!

I have been playing Orks quite a bit lately, and enjoying them. Still hate Mob Rule, but, there is a lot of ways around it if you are clever and play well. However, like Tyranids, this will be a punishing army for a beginner to play. If you play well, you will be rewarded. If you play poorly, your army will fall apart in front of your eyes and you will be a bit frustrated.

So far in test matches, the Orks have been serving me well. I have only lost 1 game against tournament players and lists and won most of them quite convincingly. Now, that is not at all me tooting my horn, just a validation that Orks can hang with the heavy weights.

I have found that just as before, Orks do great against armies that have to come towards them either because they are a close range shooting army or an assault army, or armies that tend to be static like Astra Militarum. Once the Orks get into them, they clean up. They do very poorly against mobile shooty armies though, for the same reasons they did in previous editions: it’s hard to get to grips with them. Eldar and Tau are the toughest to deal with as they out-shoot you and often can dance away from you for enough turns to just paste you before you can put a Klaw up their back sides. 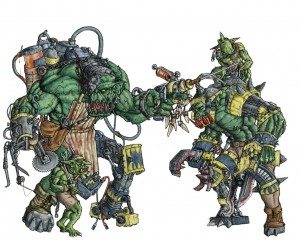 WAAGH! and ‘Ere we Go! are just fantastic rules. They make getting into combat very reliable and the Orks very good at covering ground, rapidly. Those two rules have won me the game on two occasions so far. Between them, you can get a HUGE charge off and with a big mob of Boyz with several Klaws inside. That is a good point to note, too: often, the key to winning a lot of match-ups with your Orks is to put those deadly Klaws in the right place. I have been using a big mob of 30 Boyz on foot with a Nob with Klaw, Grotsnick (who I think will be in the majority of tournament Ork lists) and a Warboss with Da Finkin Kap and Klaw. That unit packs in 14 Power Klaw attacks on the charge, buried 29 bodies deep. Plus, they’re Fearless, have FnP, and move fast when you call that WAAGH!! You will catch some folks with their pants down with a long charge turn 2 if they leave you an opening. The biggest thing though, is Fearless. That mitigates Mob Rule and keeps you reliable.

Da Finkin Kap is amazing. For a measly 10pts, you get another Strategic trait which for Orks, is incredible. That gives you 3 rolls on the chart (if you have a Detachment that allows a reroll on the Warlord table) to give you good odds of getting one you want for that game. Also, consider putting the Warboss on a Warbike, even in a foot unit, to boost him to T6 for a poor man’s EW, and so that you almost always get your FnP. It really helps and it can give you some extra movement when you’re going for a long charge, just be careful as if you do that, the Warboss is out in front and takes all the overwatch! The Warbike also allows him to go off on his own to hit a target once the mob is closer if you need him to. 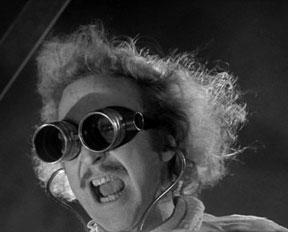 I have been experimenting with a lot of units and Formations, too. I tried the minimum Tankbustas unit in a Trukk, and it was OK. Not really that incredible, IMO. Situationally, they can be fantastic and if you find yourself facing a Baneblade or similar, a fast, cheap unit with all Melta Bombs will be very welcome! In general terms though, it just wasn’t enough hitting power.

I also tried the Warbuggies unit with Rokkits. They were OK. I used them poorly my first game which didn’t help, but I wasn’t ultra impressed. The unit dies to a stiff fart, and if they start exploding they can hurt the other buggies in the unit. Plus, the unit has a big footprint and short range, so it can be hard to get them into position to do anything. They often shoot once and then get obliterated. I am not sold on them, yet.

I did try the Bully Boyz formation and it is pretty incredible. Those Mega Nobz hit REALLY hard, and will plow through many units without breaking a sweat. Being Fearless, WS5 and Causing Fear is incredible. The only downside is if you run into an army with the tools to deal with them, you have a LOT of points invested into units that are now a liability. However, they are good enough to carry their weight in almost any game. I definitely recommend them. Plus, the new Mega Nobz are awesome models but holy crap do they have a lot of parts! Like, 25 parts per model or something crazy like that. You do get a crazy amount of bits for conversions in the kit, though, and a sweet little Grot Oiler model, too!

I also tried the Red Skull Kommandos formation and again, was quite impressed. They are very versatile and are extremely disruptive in the enemy backfield. I ran 1 full sized unit with Klaw and dual Burnas with Snikrot and 3 minimum sized units with Burnas. It worked very well, they caused havoc and forced my opponent to redirect half his army to deal with them or lose his entire backfield. The ability to reroll failed saves that turn if they don’t shoot is so good, you can go tank mode, soak up a ton of shooting, then shoot and charge. Or they can just smoke weak units with massed Burnas. If you WAAGH! the turn after they come in, you have massive threat range. I also enjoy a unit of Kommandos by themselves, too. Very useful.

Mek Gunz have still been all-stars as well as Lootas, for me. Lobbas, all day. Also, Traktor Kannons are very effective against flying units, almost ridiculously so. 5 is overkill, I have been running 3 with ammo runts and any flyer they can draw a bead on, ends up dead or on the ground where the waiting Boyz turn them into mince meat.

The Ork flyers have been working great for me, still. I have always had good luck with those though, I read and hear a lot of folks saying they don’t have much luck with them. The Dakkajet and Burna-Bomma have been great, and I plan on taking one or both in most lists I play. 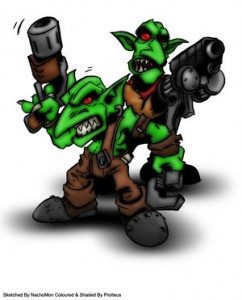 Grots have been solid, too. I often take at least one unit to fill one of my obligatory troops slots and have not been disappointed. They run around and take objectives, earning you points throughout the game.

I want to try some Nobz in a Trukk, see how they perform. With Eavy Armor and 2 wounds a pop, they are far less likely to get owned by Mob Rule. Plus, they hit hard in a different way than Meganobz, who are a wrecking ball but have serious weakness to anything that can swing first in combat and doubles them out. Nobz on the other hand, pack in a lot of high strength attacks at I3, which is respectable and goes before other unwieldy attacks. Stikkbombs actually help out here fairly well. Smaller units of them are about the same cost as Ard Boyz and hit quite a bit harder, if with fewer attacks. They may not be good, but I want to see if they fill a role in the list as I love the models.

I have been using an Aegis (with no weapon) and it has been really solid for protecting my backfield units. However, I am going to upgrade to a Void Shield Generator as I think it will really help to protect vulnerable Orks from the Alpha Strikes that can REALLY hurt them. Especially against things like Tau and Eldar, soaking up even 1 or 2 Riptide or Wave Serpent’s shooting is extremely useful. Plus, the ongoing protection it provides the static shooting units will be useful all game. We’ll see.

So far, the versatility of the Orks and sheer variety of builds you can put on the table is nuts. I am very much enjoying them, you just have to have a plan to deal with Mob Rule.

What units and combos have been working for all of you?

← Guest Video Bat Rep: Astra Militarum vs. Eldar
My Orks have hit a Brick Wall, and Tau be thy name! →