40K Got you Down? Check Out Dropzone Commander

All the craziness with 40K got you down? Maybe it’s time to see what else is out there.

Hey everyone, Reecius here from Frontline Gaming to discuss an alternative miniatures game that I really believe is one to watch. GW feels like its being run by Senator Palpatine at times these days, and a lot of folks are losing their interest in our favorite pastime. While we still love 40K and hold out hope that they turn the ship around with this new edition of the game, we are also practical.

So what is Dropzone Commander? DzC (in internet lingo) is a 10mm SciFi miniatures war-game set in a dystopian future where the human race was crushed by a species of conquering parasitic aliens known as the Scourge. Fast forward roughly two centuries and mankind (the UCM) has built up an armada of mammoth size to retake their home worlds from the Scourge. In this mix you have the highly advanced Shaltari aliens and the cybernetic Post Human Republic (PHR) working to achieve their own ends plus the soon to be released Resistance faction, which consists of humans left behind on the conquered worlds whom carry on the fight against the Scourge using grim determination and whatever weapons they can find.

What I like about this game is that it is so masterfully crafted. The miniatures are fantastically detailed and even at the diminutive 10mm scale (where a tank is roughly the size of a Space Marine), these models have an incredible amount of detail. Each faction has a very distinct, unified aesthetic and you can see the attention and skill that went into making them. They are both easy to paint to a good standard if you want to just base/wash/drybrush and get them on the table, or, you can really go to town on them and put a serious amount of attention in them. The only downside here is that there really isn’t a lot of room for conversions which is my only complaint with the models in comparison to a game like 40K.

The game’s background is in its infancy, but the story is interesting. The game opens with mankind having just launched their massive effort to retake their home worlds. It feels like the beginning of a momentous moment in history. As the game develops, that story will progress and grow. What we have now though, is well crafted. The game definitely has more of a hard SciFi feel where everything feels grounded in science and is thought out and explained logically, which I love. Its a bit like reading an Asimov novel where you can sense that the person writing the story knows what they’re talking about and has done their research.

Where the game really shines though, IMO, is in the rules. I love all aspects of miniatures gaming, but for me, playing the game is my favorite. This game has an incredibly tight rule-set. It is written to be balanced, and balanced it is. No faction is clearly better than another. They are all different in subtle, meaningful ways that create distinct, fun play-styles. In the dozen games I have played so far, it has usually come down to the last turn with something dramatic like my Special Forces soldiers fast roping from their aerial transport into a building to blast some alien scum at close range and then make their escape with a vital objective! If you do manage to really pull ahead, the other player typically still has a chance to get back in the game through clever tactics and the use of command cards, which give small boosts to your units during critical moments if used well.

The game uses the much preferable (IMO) alternate unit activation turn structure wherein a portion of your army activates, then a portion of your opponent’s and back and forth until you finish a turn. This way, you are only ever not playing the game for a few minutes at a time. This helps to keep you engaged and you are far less susceptible to alpha strikes. It creates a more fluid and reactive game where you have to think about order of operations in unit activation, try to impose your plan on your opponent while simultaneously attempting to predict their actions and react to any surprises. It creates very dynamic games.

The game also revolves around objectives, with only a single Kill Point mission to keep players from spamming troops (which are best for taking objectives). The objectives vary wildly in number and type. In some missions you can have over 20 objectives on the table or only one! They vary in the way you interact with them too, ranging from simply touching them to score to having to hold them, take them off of the table or even find them in a large building wherein your infantry can engage in close quarters fire fights over them. This emphasis on objectives and diminished opportunity for alpha strikes, means that taking an army that only does one thing, such as spamming certain units or all out offense, aren’t as likely to succeed. You truly need to take a balanced, well rounded army in this game to consistently win the wide variety of missions you will be presented with.

The game also provides you with a wide variety of tools to use. At first it seems very rock, papers, scissors in that you have units that are good at fighting certain other units. For example, Flak Tanks that are good at taking down Flyers. However, each of these units is subtly different and has multiple uses if you can see them. The UCM slow, heavily armored Rapier, for example, seems like a dedicated AA tank but is also great at pulping light buildings, infantry and skimmers. Compartively, the Scourge Reaper is not as versatile but is faster with lighter armor and hits harder. While both of these units fill the same primary role, their secondary roles and slight variations create really different play-styles. As you become more experienced at the game, you will learn to see and take advantage of these nuances to really find the tactical depth in the game.

Almost every unit is also cool in some way, but with specific drawbacks to keep it from being overpowered. The Desolator, pictured above, is pure death at close range. It literally fires an Ion Lightening Storm down on hapless units beneath it in a devastating AOE attack. It is also a flying unit which means it is hard to hurt and it has a boatload of damage points (wounds) which makes it a truly scary unit. However, it has weak armor so that when you do hit it, you hurt it, and it is an HQ unit which means that losing it can be a devastating blow. You want to just throw it forward with some escort units, but to do so could cost you the game. You have to be careful with it. It is little touches like this that you see in all aspects of game design that really make this a balanced, fun game to play. There is no such thing as a deathstar in this game, even units like the massive Hades walker will die to concentrated firepower.

The game is very easy to learn but difficult to master, which is great. In comparison to games like Warmachine or 40K which are hard to learn and hard to master, DzC is very friendly for a new player to pick up. In just a few games, it comes together. Mastering the subtlwties though, is an ongoing experience and one of the things that I love about any minis game. You always want to feel like there is something new to learn in a game with tactical depth, and so far, I feel that way with DzC. No matter how many times I think I have memorized opening moves, or the right tactics for a situation, the highly fluid nature of the game and changes in my opponents actions or reactions have had my thinking on the fly to make adjustments. That to me, is great. It keeps things fun and avoids becoming stale. 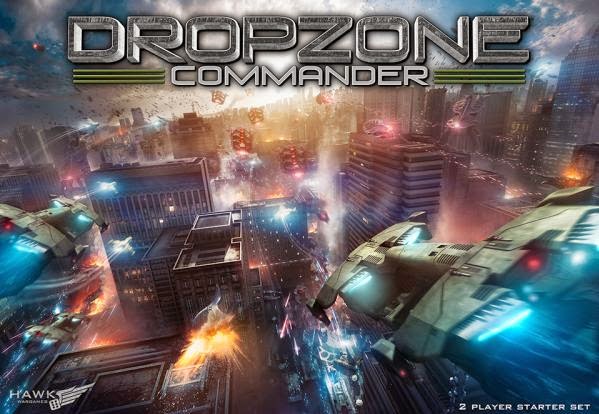 The Two Player Starter Set is a great value, too. It comes with two armies that are around 600-700pts (a tournament army is 1,500pts), a map to play on, terrain, a rule book, dice, tape measure and templates all for under $100! It is an incredible value. While individual models are more expensive for this game than others, an army is typically cheaper. For $200 to $300 bucks you can build a big army with tons of options which in the wargamer world, is a bargain.

Lastly, the game is well managed on the business side of things. Having spoken to Dave (owner and creator of the game) at length while in Valhalla, I can tell you he is a guy that knows what he is doing. I feel that this is a business that is not in danger of going belly up which so frequently happens in our industry, and will continue to grow and thrive. They release updates in the Privateer Press style, as I refer to it, where every faction gets an update with every release which is awesome. No one gets left in the dust waiting years, even a decade at times, between updates. This keeps each faction fun and fresh and new releases balanced against one another as they are developed and play-tested alongside one another.

As I have said many, many times, the three factors I believe make for a successful miniatures game are: beautiful miniatures to inspire us to paint and model, a compelling background to keep us interested, and a tournament tight ruleset to make the game fun and fair. DzC has all three of these. If you want to pick any DzC goodies up, you can do so over at Frontline Gaming at our webstore.

Here’s an interview with Dave from Hawk Wargames!

Posted on May 14, 2014 by Reecius in Dropzone Commander, News

29 Responses to “40K Got you Down? Check Out Dropzone Commander”