So We Tried the Triple Knight Army…. 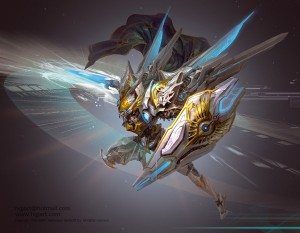 It was a total massacre.

The Knight player faced off against a tournament tested Triptide Tau list with Kroot, Crisis Suit troops, and plenty of marker lights. The result was an absolute blowout, with the Knight player steamrolling the Tau player.

As we watched the game unfold, the Tau player made some really big mistakes that were the root cause of the game being so lopsided. He castled in a corner when he really didn’t need to. He was intimidated by the new army and didn’t play as well as he normally does. The Battle Cannons posed very little threat to his Riptides with a 2+, and he was able to hide or reserve his Crisis Suits and Pathfinders.

The Outflanking Knight was the key though, as he came out of reserves right on top of the Tau castle and was dropping Melta pie all over the place  and putting huge pressure on the Tau. Theother two knights arrived to back him up in time to assault into the Tau castle where the stomps and D slappers made short work of the clumped up Tau units. Exploding Knights were also brutally effective and destroying things. Once the castle was breached, it was all over.

Had the Tau player instead spread out, and taken some licks form shooting, he would have been able to flank the Knights and get around the Ion Shields, to blast them with superior firepower and stay away from the deadly Knight assault. He would have also forced the Knight player to spread out his units and therefore diffuse the impact of a multi-Knight assault. Even with the drubbing he was taking, the Tau player was able to drop 2 of the Knights but it was already too late as the Marines took objectives and the T-Fire Cannons and Storm Talons hunted down any straggler Tau units.

So, first impressions of the Knight army is that especially with solid support units, the army is 100% tournament viable. It will have a lot of shock and awe value the first time folks play against it, but movement and thinking a turn or two ahead are the keys to taking these units out, as applying the right tools against them does destroy them. Tactics will beat Knights, you just have to get a feel for how to go about doing it with your list.

Plus, the army looks absolutely bad ass on the table!

← So You Still Think You’re JUST a Model Company, Do You?
Signals from the Frontline: Warhammer 40K and General Gaming News, Rumors, Tactics and Jokes! →

71 Responses to “So We Tried the Triple Knight Army….”