Novastar on Lords of War 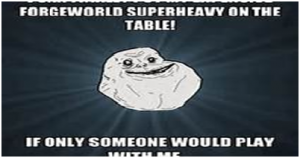 Hey everyone, Novastar sent in a guest editorial on Lords of War for us. But, reader beware, Novastar writes for an adult audience and doesn’t pull his punches. -ed

Super heavies: Quit bitching or go make me a sandwich, either way please stop complaining. Novastar has stated to me that he didn’t intend for this statement to come across as sexist and that he was writing in a particular style with the aim to be funny, not to insult. -ed

Hey Gang NovaStar here to give you some (un)sage advice about tackling your opponent’s point sinks. First I want to let everyone know it’s okay: 40k isn’t broken. In fact, Super Heavies being put into normal games is an intentional fix by games workshop to help shift the meta. What!?! How dare you say it’s not just about the money? Well, it is about the money to some extent but Games Workshop also runs really big, in-house tournaments and events at Warhammer world and when the designers see an imbalanced list or units running amok they really do listen and try to change things. The big GTs said no to Lords of War and look what happened: the next super heavy isn’t a Lord of War.

Anyway, enough of my fan boy shield, lol. Every army has multiple tools to tackle super heavies and pretty reliable tools too, so here is a list of units from each codex that can deal with the new bully on the block and thank god he moved into town because it was tiring seeing all those cheese-dick 2++ zero skill armies out there. Now this list is going to have units that you as a player may or may not own or seen being played because they are deemed bad in today’s game but guess what tomorrow is here and new(old) weapons need to be ready.

I must preface this with that Flyers and Flying Monsters are the bane of almost all super heavies and when they explode are not affected by the blast as long as they are not hovering or swooping.

Now I’m not saying that these units will give you an auto win, but nothing in the game should be and we see what happens when those units/combos are allowed: it’s not fun. 40k is a rock, paper, scissor game and super heavies are the rock to 2++ and guess what gang, every codex has a paper to take out that rock, and you have a much better chance to take on a super heavy then you do a 2++ death star

And everyone who plays the 2++ stars, are you really having fun playing your Mike Tyson list vs your opponents Helen Keller list? Really, are you? You’re the reason super heavies are a necessity.

55 Responses to “Novastar on Lords of War”