Guest Editorial on Nids by Edwin

You are here: Home › 40K › Tactics › Guest Editorial on Nids by Edwin

Edwin here. I know the Tryanids have gotten a rather bad rap since the codex dropped, but personally, I really love this book. Check out the Tactics Corner for more great reviews!

Each and every slot has a good unit, but the best part of this is that each of these “best in slot” units are not spammable. They are good as a single or maybe running two, but that is as far as they go. You can take a rainbow of units and be successful. Units don’t handle each and every situation in the Tyranids codex, so you have to spread the points out to be able to handle each threat. There are some bad units and some terribly written rules (which the Pyrovore conveniently fits for both), but overall, units are all good in their own way and usable. Some are good in a few situations *cough* Genestealers *couch*, but they still have their uses. I really want to talk about who I feel are the winners of this codex in each slot and why. Also, I want to talk about the hidden gems of each slot (they are pretty nifty)

HQ
This is the easiest choice in the entire book. They Hive Tyrant works in any role you care to have him fill. He can be a melee beast if you need one, but you are probably going to want to build him ranged as he will fill most roles needed with a simple shooting build. Need to kill infantry? 2 Twin Linked Devoures work wonders if you are close enough or you can even throw out a Barbed Strangler to kill people at range. Need some AT, a Heavy Venom Cannon will seriously put the hurt on vehicles. Throw on wings or 2 Tyrant Guard for protection, and you will have a durable synapse unit that can eat people depending on how you build him.  You have to think of how you want your synapse set up and where. If you want to be able to keep up synapse on your faster units. the Flyrant is definitely for you. If you need a strong synapse creature in the middle of your army, the two Tyrant Guard will keep a Tyrant safe enough
Death Leaper is the hidden gem of the HQ section. Death Leaper is pretty good. He has all the good things lictors have and he has a few extras. He has a rule that makes everyone snap fire at him so he can infiltrate forward and not get shot to death and he is immune to blasts and flamers as they cant snap fire. He isn’t fearless so he can go to ground if out of synapse and his warlord trait can win games in low objective games like relic. He has hit and run, so he can slingshot himself pretty far if given the chance. He is cheap which is most of the reason you want to take him.
Elites

The Venomthropes win this slot if only because they provide synergy with the rest of the army. Hide them behind a big creature and they have a 3+ cover save. Any unit within 6 inches will have a model that gets shrouded. Because shrouded says you only have to have one model with shrouded for the whole unit to have that +2 to cover, it is pretty good.  The best part is that he is also cheap. 45 points is pretty good for what he gives you. Surprisingly, he is no slouch in melee. Lash whips give him I6 with 2 attacks with poison 2+. It can help kill some tough creatures who are hard to kill because of high toughness . He is WS 3, but a lot of the Tyranid book is surprisingly.  These guys will die. The fire needed to kill these guys is going to be  significant. It is fire that isn’t directed at the rest of the elite slot which is primarily AT units. Even in a meta that has alot of things that strip cover or ignore cover, you find that Venomthropes force people to make decisions on what they strip cover from. Watch for Precision Shots. They can kill the models with shroud and your unit will lose shroud.

The hidden gem is the Pyrovores…..hear me out. Volatile says “If the Pyrovore is slain by a wound that inflicted instant death, every unit suffers a S3 hit for each model within d6 of the slain Pyrovore” so plop 30 Gaunts within 6 inches of a Pyrovore and if it gets hit with ID, every unit on the board takes 30 S3 hits…….It is dumb, but pretty hilarious. People will probably commit horrible acts of violence if you honestly tried to play it that way, but it is good for a laugh when you read it. That laugh is all it is good for.

Troops
Tervigon wins the troop slot. Even with the increase in points and loss of biomancy,  this troop choice is still good. You need at least one. Spawning troops, a pretty good S5 large blast template shooting attack, Psyker level 1, Synapse, and that T6 W6 stat line, they are pretty good. The remind me a lot of playing orks. They work well at doing what the enemy does poorly. Someone good in melee? shoot them. Someone pretty shooty? Go give them a hug.  230 points with regeneration and Cluster spines  (which is nice unless they focus him down, but then they aren’t shooting at the other units), this scoring behemoth is good at being adaptable to what you need. This is certainly not a spam unit, but one is definitely needed.  It also gives counter attack to Termagaunts within 12 inches. Nothing to write home about, but I have won and lost games with less.

Genestealers can be pretty lackluster at times. I find that I always want to run a single unit with broodlord to really try and pick people off or infiltrate onto an objective. They can do a lot. Outflank is nice. The Horror from the Broodlord is pretty nice when you want to try and lock down a unit and get ready to pounce on them the next turn. They can kill people pretty easily in melee. WS 6, I6, and 2 attacks is nasty. Ld 10 helps them stay stuck in combat if things don’t go well so they can tie up ranged units and the Broodlord is perfect for challenges against anyone that isn’t dedicated to melee combat. Fleet, Move Through Cover, and Infiltrate mean these guys are going where you want them  Lack of Instinctive Behavior means they will not have to be baby sat by anything with synapse, so you can apply early game pressure. Unsupported , they die. Let them go after isolated units, and they will really start to shine. They offer a lot of options in how you play them.

The Harpy wins this slot pretty easily. The ability to swap between a Twin Linked Stranglethorn Cannon for killing infantry and taking a Twin Linked Heavy Venom Cannon for tank hunting is pretty good. It is pretty good at range. Combine this with special rules that really want you to get close and you find a support flyer that is just scary. you can Vektor Strike, but with the Spore Cysts, you may not want to. You can chose to drop a S4 AP4 Large blast that is also barrage onto anyone you fly over with reduced scatter. Useful for trying to snipe out heavy weapons or Leaders, it complements the Sonic Screech rule really well. Sonic Screech drops all enemy’s initiative by 5 that are involved in the combat the Harpy charges into. Get close doing  damage and drop down and charge into melee to see all enemies strike last. All for the cheap cost of  140 points, and you have a great cheap unit that can do work. Combine him with the hidden gem and they really shine.

Often used as flying cover, Gargoyles have probably the nastiest melee ability in the entire Codex: Tyrandis. Ever wonder why we have never seen large unit style units with access to blind? This is why. 10 Gargoyles are 60 points. 10 melee attacks that for each hit require an Initiative test or you suddenly become WS/BS 1 for a turn.. Every single hit this unit does in melee with their blinding venom causes a blind check is nasty, but when you add this to the minus 5 Initiative that the Harpy uses when charging into combat, and you are going to see even elite melee units fail and be stuck in combat for a turn. Charge in with some slower units in the following turns or bring a Genestealer squad in to help and you can see a really expensive melee unit disappear very quickly. It may seem like a lot to throw at something, but 10 Gargoyles and a Harpy come in right around 200 points. They are really nasty. 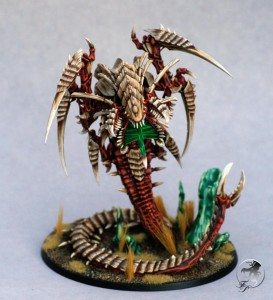 The Mawloc is awesome for the cost. 140 point T6 W6 Monstrous creature that provides some crucial Low AP hits outside of melee combat. His Terror from the Deep destroys entire units. The AP2 Template now hits twice if the Mawloc can’t deploy. It was a close race between the Biovore and the Mawloc, but one thing really sealed the deal for me in this race. The Mawloc can use his Terror of the Deep large blast template on units in melee. Woe to a foe who is locked in melee with a Lictor, because that Terror of the Deep will murder most units that are gathered around the Lictor. Even if you mishap, o well. You have half a chance to go back into reserves and Terror from the Deep next turn. I have heard him refereed  to as the ninja. Entire units just disappear  and often times, because  someone lives, it is as if he was never their.He is good. at something the Tyranid army has a problem with.
For 40 points, you have a S4 Large Blast Barrage who is tiny and can sit at a good range and snipe people of importance. If he misses, he produces spore mines. Spore mines are pretty awesome as it is and this guy makes more.. He is great because he does a lot, but it is his cheap price tag and ability to be taken in trios that really makes him shine. For the low, low price of 120 points, this unit decimates people who need to hide behind aegis defense lines. Dark Angels brought the Banner of Devastation?  One barrage shot later and that banner is no more. They fill points and they fill them well.
The List
So with all this in mind, absolutely zero of these options are really spammable. You can spam, but you will find yourself coming up lacking in a lot of areas. I have found myself gravitating towards a rainbow list. The only duplicate unit I have is two single zoanthrope units instead of two zoanthropes together. There is more of a chance to get critical Pysker powers and more flexibility in my synapse. You will notice that I often don’t have some of the best in slot units in my army. They are good, but you don’t need them to win with this book in my opinion. Here is the list I plan to use at 1750. Hope you like it and Good night
HQ
Hive tyrant-2 twin linked devours, 2 tyrant guard
elite
zoanthrope
zoanthrope
3 hive guard
troops
10 genestealers-broodlord
30 gaunts-spine rifles
tervigon-cluster spines, regeneration
3 warriors-death spitters
fast attack
5 raveners-rending claws
heavy support
mawloc
biovore
tyranofex-rupture cannon

15 Responses to “Guest Editorial on Nids by Edwin”