You are here: Home › 40K › Tactics › Guest Tactica on Baharoth by Pascal R. 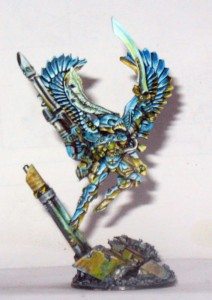 A Phoenix Lord is the answer??….Guest tactica by Pascal R. on Baharoth! As always, check out the Tactics Corner for more great articles and videos.

Hi there, Pascal from New Zealand here. This article came into existence through a little conversation I had with Reece at the Frontline Gaming store, so you can blame him for encouraging me to write my first article:) All my fault! -ed

A friend of mine plays Eldar and we were both pretty excited when the new codex came out. He used to play a very Wraith heavy list and surprised quite a few people with the sheer resiliency of Fortuned Wraith Guard, 3 Wraith Lords and Wraith Seer handing out 4+ feel no pain.

One of the best pieces of his army was Baron Sathonyx, bringing hit and run +1 to go first, stealth, defensive grenades, 12 inch move and 18 inch range guns increasing the kill range of the rather short range Wraith Canons.

His one issue was that he didn’t have Battle Focus and with the high speed glory which is Iyanden Spirit Seers being able to grant Battle Focus to wraith units as well possibly granting +3 to run moves it was quite a big loss.

Even with the far greater mobility that having 4 to 5 Spirit Seers granting movement buffs is, he was still having trouble with his gun Wraiths getting bogged down in combat. The Baron was still great for getting a unit out of that combat, but then the enemy could just stay 18 inches away and have no fear of the guns. Other units like Wraith Knights could go in and bail out a squad of guns but it was no guarantee and it forces you to bunch up your army. In a low model count army losing efficiency through babysitting and restrictive movement is pretty devastating.

One of the first ideas was to make a gun unit scary as hell in combat and try and make use out of all the spirit seer buffs. He had a Feugan he wanted to paint and his ability to tank wounds on a 2+ armour, 5+ feel no pain eternal warrior chassis was nice. His getting +1 strength and attack for each wound suffered and striking with and ap2 armour bane weapon was excellent especially coupled with the possibility of regaining wounds through a Seer’s psychic powers to amp up the crazy. Finally having splitfire and an 18inch range melta to extend kill range seemed like guy worth trying out.

Turns out for almost the price of a wraith knight…you should probably get a wraith knight 🙂 3 wounds was too risky to really go for too many soaked wounds and his Feel no Pain didn’t work that often as a lot of the firepower that would get through would be pretty high strength. In combat he just wasn’t that scary vs proper combat units and/or MC’s smashing him or the unit into pointlessness after a charge. and of course his gun was usually just worse than the unit’s basic weapons and you can’t always get a healing powers to help make him that scary guy in combat.

At that point it seemed like we just couldn’t get a big unit of gun wraithguard to work in an Iyanden Heavy list. As we took one last look through the codex, one special character that no one ever talks about finally made us sit up and have a giggle about how perfect he was for what we wanted. His name?? Baharoth.

That guy with the crappy gun and ap3 close combat weapon that adds pretty much nothing to the aspect he exemplifies? A swooping hawk Exarch can get a 3 shot, blinding, ap3 gun and hit and run and you really want swooping hawks in combat? and compared to a Farseer he doesn’t add a lot of buff to the army on killer units like Warpspiders or guardian blobs.

But in this one type of list for this unit he was everything you could ask for.

All of a sudden you have quite a lovely little death star.

This unit has the ability to shoot and mess up an enemy unit turn one (with just a little luck) and after that it’ll be shooting assaulting and hit and running for the rest of the game… all while scoring.

We even found a nice place for the Baron, a unit of axe wraiths.

Two tough, scary, scoring, hit and run units in your face causing trouble from turn two at the latest onward, all for under a thousand points plus 4 to 5 seers to taste.

So what do you all think? Is there a place for Baharoth in a list as Pacal points out?-ed

25 Responses to “Guest Tactica on Baharoth by Pascal R.”