Common Forge World Units and how to Defeat Them

You are here: Home › 40K › Tactics › Common Forge World Units and how to Defeat Them

Hey everyone, Reecius here from Frontline Gaming to send out a PSA on the most common Forge World units you will be likely to see in a game and the counter tactics to use against them!

So, as a lot of you likely know, the Las Vegas Open is nearly upon us. It is going to be AWESOME! 3 days of gaming in Vegas with good friends! 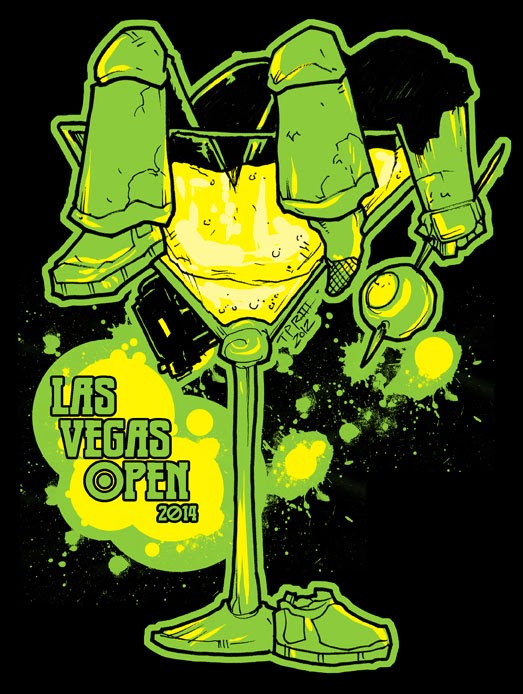 We have a ton of great events going on (all of the main events sold out too, sweeeeeeet!) and the event is going to be so much fun, but the main event is the 40K championships. We allow Forge World in our events, and have done so for over a year with 5+ GT level events under our belts in this format. Here is some of what we have learned from that experience and from having played against and with FW units ourselves for quite some time.

There are only a few units you really need to be aware of.

While there are many dozens of FW units out there, you typically only see a handful of them commonly. Most FW units are–quite frankly–under-powered. There are a handful of very powerful or very useful units that you see often. This is not surprising when you consider how expensive FW models are. You want to buy something you will use!

Here are a list of the most common units we have seen at our events and how they are used as well as how to counter them. I am going to group the first into one category as they all share similar characteristics. 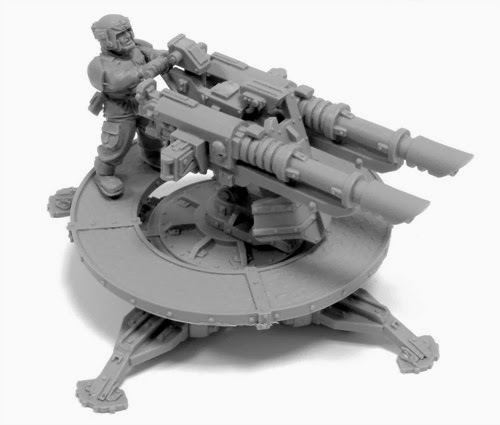 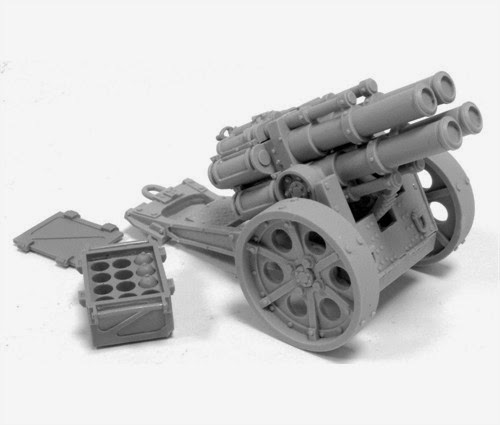 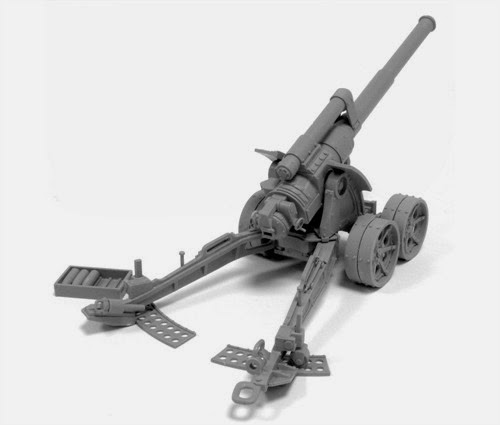 What’s the Big Deal?
You defeat all of these artillery units in the same way: kill the crew. Artillery units are tough cookies and can be very difficult to destroy by engaging them directly. As they use the artillery piece’s toughness of 7 against shooting attacks, and will often be behind an Aegis line or on a Skyshield for protection, trying to shoot them to death with most weapons will be futile. Further, a common trick with IG artillery specifically is to go to ground behind an Aegis when shot at (but remember, the cover save bonus does not help the gun, only the crew) and then use the “Get Back in the Fight” order to shoot normally in the next phase. This makes the guns very hard to kill. They will also often have a Lord Commissar nearby to boost their leadership, and a Company Standard for the same purpose. Lastly, you will often see psykers such as Rune Priests, Librarians and Inquisitors attached to these to buff them with psychic powers.
So what to do?
The same thing you do against any opponent: don’t play their game. When you are faced with a defensive combo your opponent has invested a lot of points into setting up, it is folly if you do what they wants you to do. For example, when a Screamerstar, Ovessastar or Jetseer Council is fully juiced up, don’t waste your time attacking it. That is what your opponent wants you to do. The same principal applies here.
Kill the supporting units first. Just like when playing Taudar or many Eldar lists, you should target the much squishier support units and then target the heavy hitters. Taking out the support makes the artillery so much easier to handle. In this case, it would be the leadership boosting units which tend to be low model count, single wound, T3 units. Wax those guys and the guns are much easier to deal with.
That accomplished, focus on forcing morale checks on the guns. If they run, the gun is removed as a casualty and these units tend to have awful leadership, typically 7. Do this by killing just enough models for a check, Tank Shocking, etc. And, if you can get them in assault, they use the crew’s toughness and are almost 100% going to get run down.
Also, remember these units cannot move. Use terrain and good deployment tactics to limit their ability to shoot you. Lastly, barrage weapons can only hit the top level of a ruin. So, if you can duck under an overhang (including a Skyshield), many of these weapons cannot even affect you.
Imperial Guard Flyers 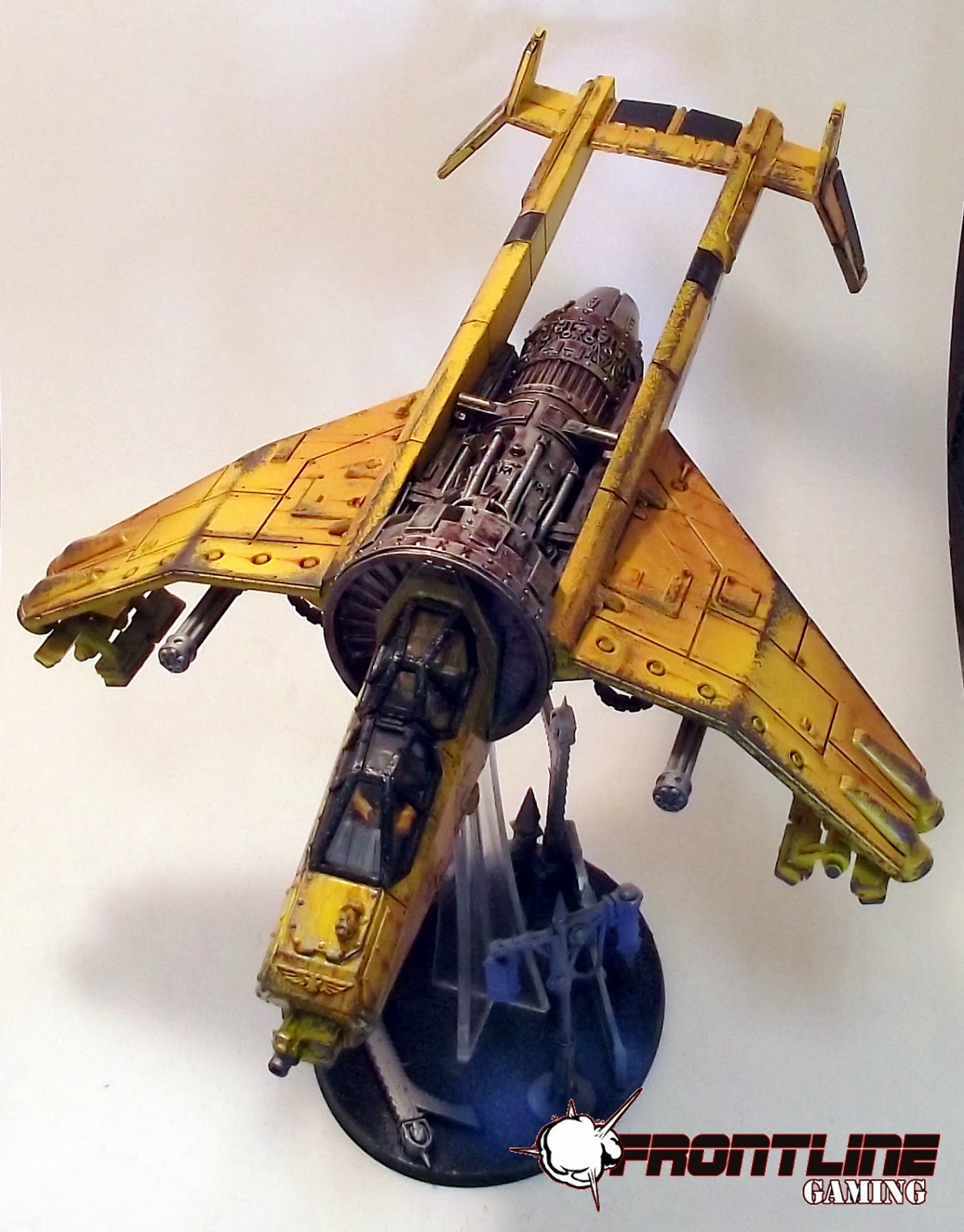 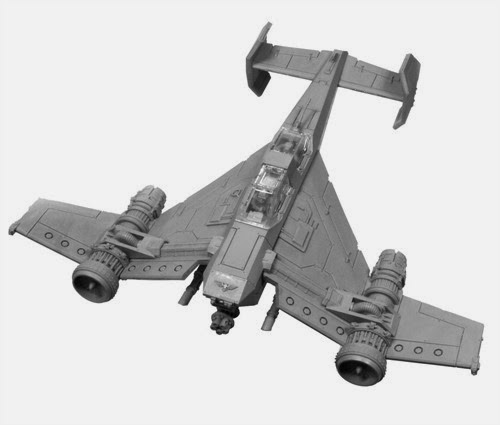 So what to do?
Dealing with these is no big deal, really. Same as any other flyer. It is just good to know what kind of offensive output they have so as not to be taken off guard by it during a game.
* Please note, the Armored Battle Group rules are not in use for the LVO for IG.
Space Marine and Chaos Space Marine Units 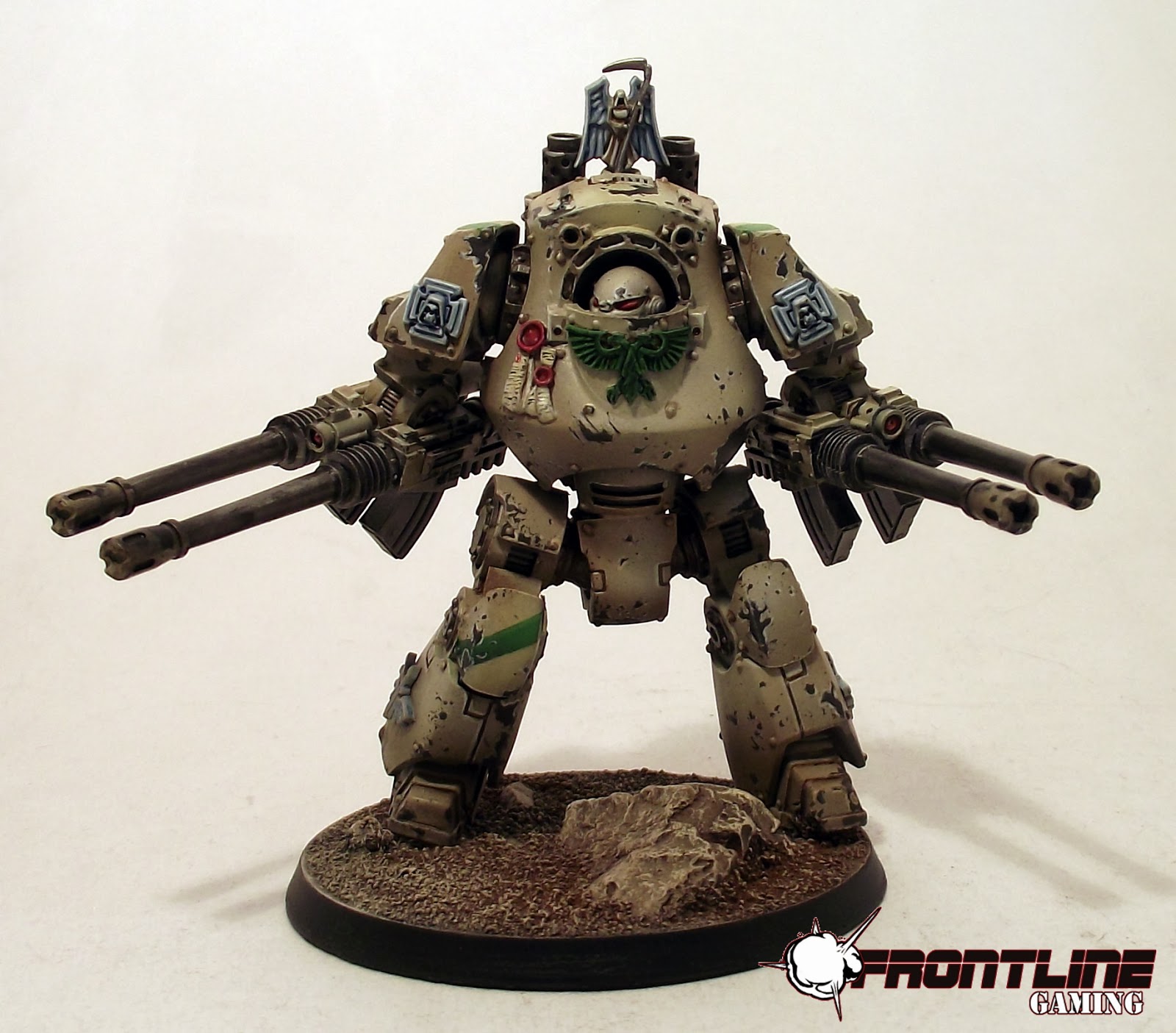 So what to do?
Again, these are quite simple to deal with. It’s an AV13 Dread with an invul save. If it is sporting Assault Cannons which have 24″ range, it has fairly limited range if it wants to use skyfire so you can often avoid it’s threat range with your fliers. 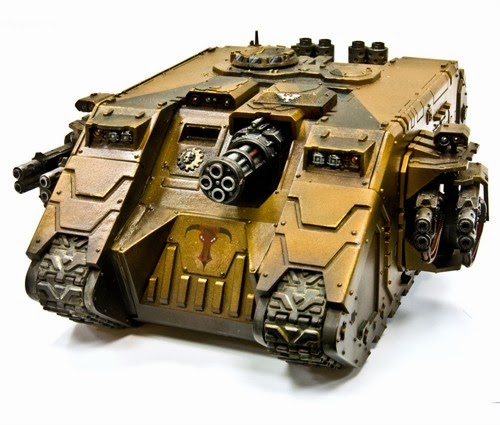 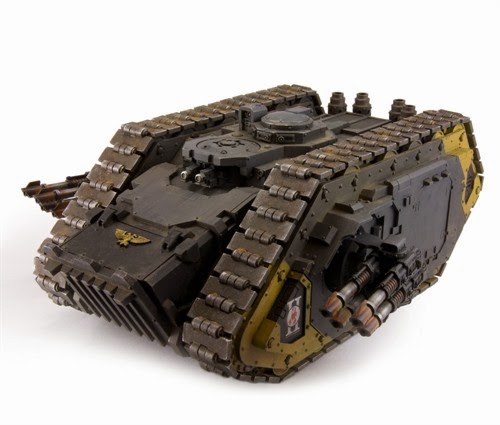 What to do?
These are useful tanks and quite good, however, they suffer from Land Raider syndrome: very expensive and can be taken out in a single shot (although they are very tough cookies, no doubt). Monstrous Creatures particularly, make short work of these in assault and 6th edition is the MC edition. That is why you don’t see them that often. Also, remember the Achilles is not an assault vehicle and it only holds 6 models, so typically the only thing in it will be a Scout Squad. 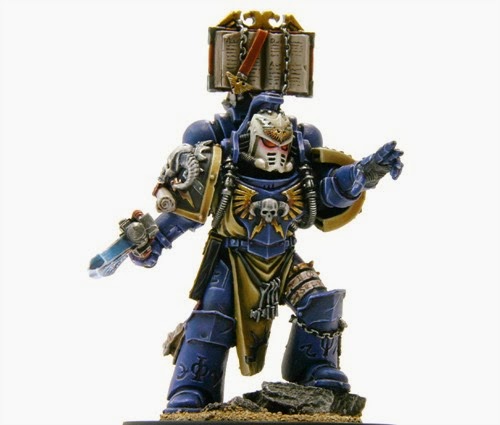 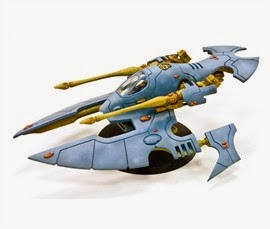 What to do?
Again, this is more a case of just knowing what to expect. They die quite easily having only 2HP, but pack a brutal punch and are very fast. Just like War Walkers, these should be high on the target priority list as they are relatively fragile and pricey. These look great on paper but you actually don’t see them that often as they fill a similar role as War Walkers, and are pricey in real life dollars. Simply put: Eldar are so powerful they really don’t need them. 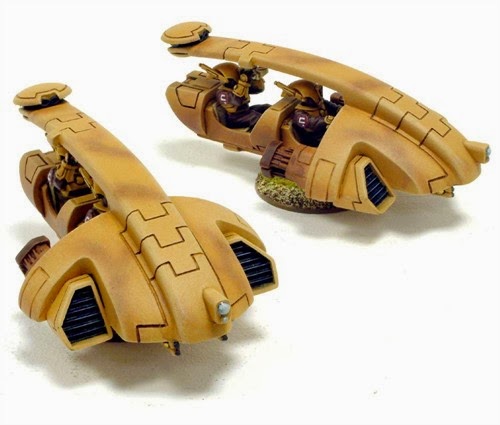 So what to do?
Again, very straight forward. As always with Tau, you kill the support units first. Tetras are open topped and easily destroyed, so destroy them! It’s just good to know what they do in advance. Think of them as Pathfinders+, and prioritize them as such.
Those are by far the most common units you will see. Yup, that’s about it.
In our experience, that is about the extent of it. You may want to brush up on the other units but if you are aware of the above, you will be well prepared for a FW inclusive event.
You may see the occasional Giant Spawn in Chaos lists as they are a good value but not amazing (cheap, T6 monstrous creature with a 4+, but very slow) and the Blight Drones (Fragile, flying Battle Cannon) are good but don’t touch a Heldrake in terms of utility. Relic Predators are solid, but how often do you see Predators in this meta? Not often and these die just as easily despite cooler weapons. The Dreadnought Drop Pod got nerfed a bit, but is still useful (can’t assault out of it the turn it arrives, anymore). The Storm Eagle is solid but really expensive for what you get. We see the occasional Ork Mega Dread and Eldar Shadow Specters, but rarely and they aren’t anything to be afraid of.The Fire Raptor and R’Varna are still experimental rules (the Fire Raptor is now official in IA2) and as such, not legal for use at most events including the LVO. For the most parts a lot of the other units are either very rarely seen or really not that great and are only flavorful additions to the game.
Now bust out those beautiful toys and have some fun with your game!  Do you fear the Forgeworld?