Taudar Tactics: Playing With or Against Them

You are here: Home › 40K › Tactics › Taudar Tactics: Playing With or Against Them 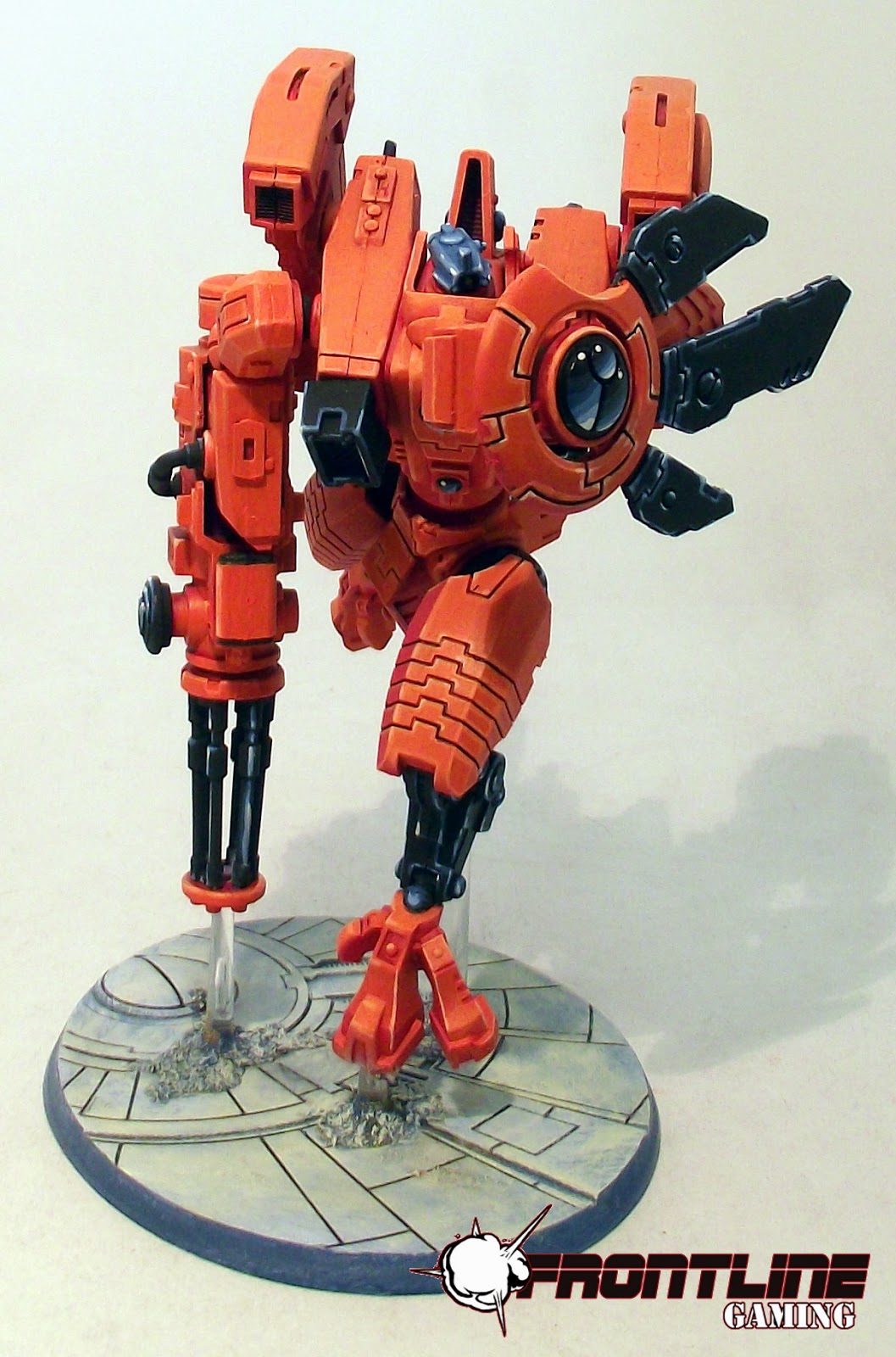 Taudar (Tau primary with Eldar allies) is easily one of the most powerful armies in the game. Here’s some tips for playing with and against them! As always, check out the Tactics Corner for more great tactics and tricks!

Hey everyone, Reecius here from Frontline Gaming again this week to talk Taudar with you.

It’s no secret that Taudar are a powerful army. Tau and Eldar individually are incredibly good armies and together join like peanut butter and jelly to form an incredibly powerful force.

I am using Frontline Gaming’s studio Taudar army as an example. We will be auctioning off this beautiful army at the Las Vegas Open! It was painted by our paint studio! If you are there, be sure to buy some raffle tickets and you can take this bad-boy home! It comes with Secret Weapon bases, a Mr. Danady custom Defense Line and a Tablewar Display Tower to carry it. Wow!

So, what about the Tau+Eldar mix is so potent?

In a word: synergy.

Tau and Eldar both are about using support elements to boost the power level of primary combat units to make them far more powerful than they would be on their own. As the two armies are battle brothers, they can join together for overlapping USRs and psychic powers. That is the secret sauce, so to speak. Oh, and yes, Tau uber-overwatch works when you assault their allies, too (although allies do not benefit from the rule if you assault the Tau portion of the army).

To that effect, the HQ selections are really important and, honestly, rather obvious. 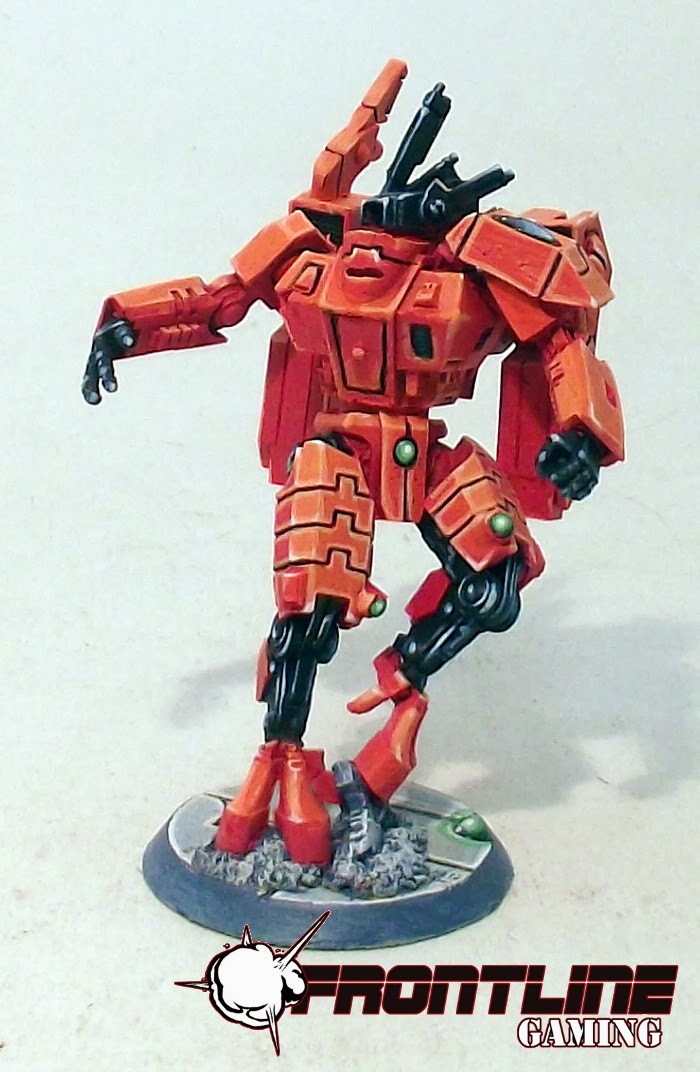 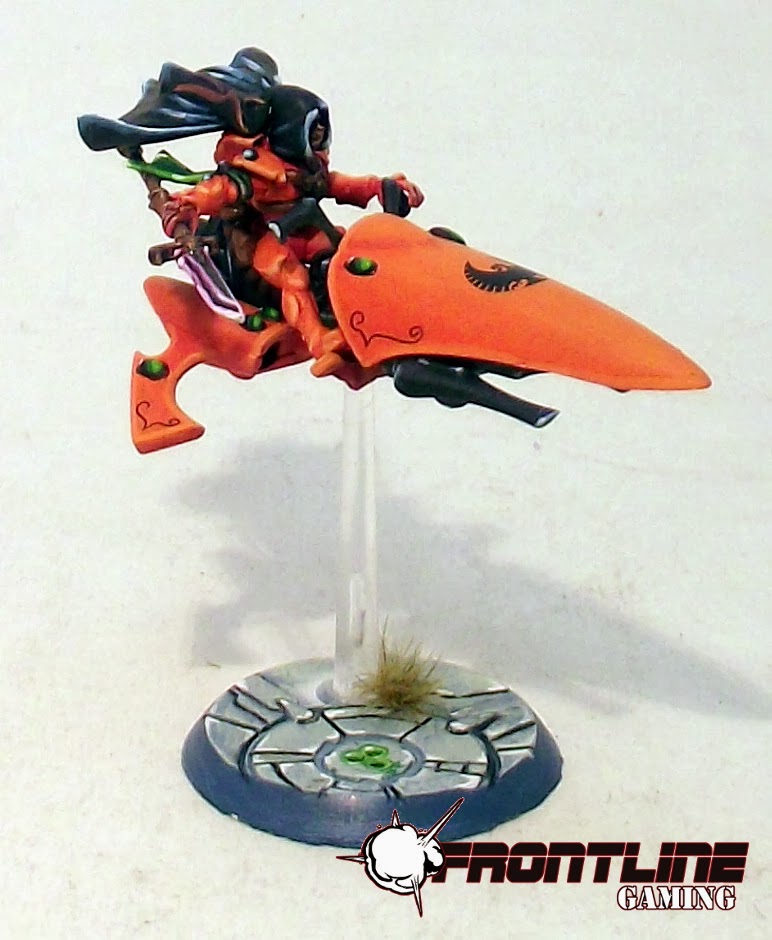 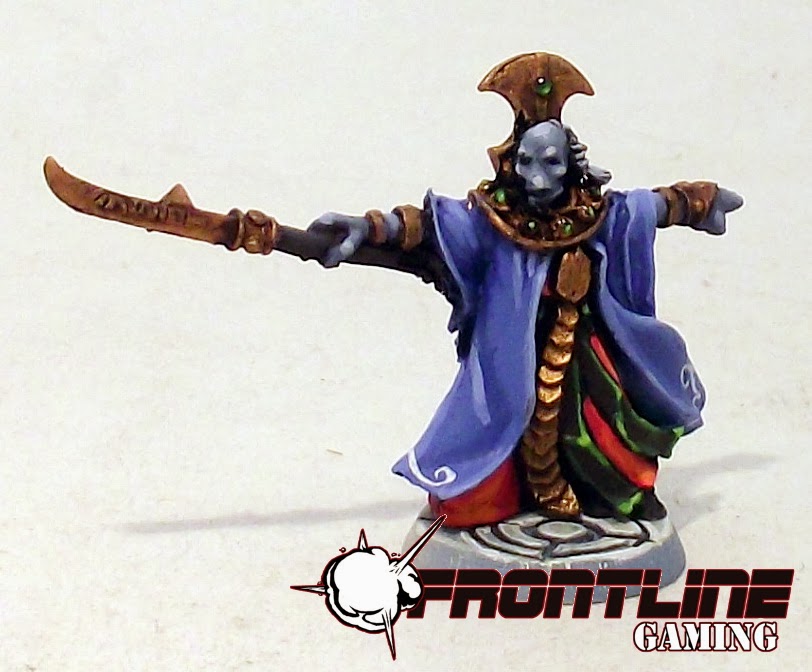 The Tau Suit Commander with all support systems, or Buffmander as he is known on the interwebz, is an incredibly powerful tool. He allows a unit he is with to perform a wide range of tasks such as ignoring cover, twin-link, gain Monster Hunter, Stubborn, etc. And, he doesn’t have to roll for these abilities as a Farseer must, but just chooses to use them. He is also durable with Iridium armor and can be difficult to kill.

The Farseer on a Jet Bike, or Jetseer as he is called, is another incredibly powerful force multiplier, just like the Buffmander. He is fast, fairly resilient (although not as tough to kill as the Tau Suit Commander) and has an incredibly wide range of powers to choose from, all of which are good. Divination, Runes of Fate and Telepathy are 3 of the best schools of powers from which to choose. You can alter which powers to take depending upon your current opponent. His versatility is his strength.

The Ethereal is another crazy bargain. He force multiplies all of the Tau units around him with offensive buffs, leadership bonuses and defensive buffs. He does have the drawback of giving up bonus victory points if killed, though. He’s well worth his points and the increased risk, though and will keep the backfield secure.

The key to playing with or against these units is simple. If you are playing Taudar, you want to keep these units attached to or in range of units they can increase the kill power of while simultaneously trying to stay safe. And yes, ICs can attach to Riptides even without Drones per RAW, even though it really doesn’t seem like that was the intent.

Playing against Taudar, you want to take any opportunity to destroy these force multiplying units. They are the linchpin units and their removal makes everything else in the army easier to deal with. Double them out, or use Instant Death weapons wherever possible as the T3 Ethereal and T4 Jetseer can be squished fairly easily with the right tool. Along with these as top target priorities (if possible to destroy them) are these fellas: 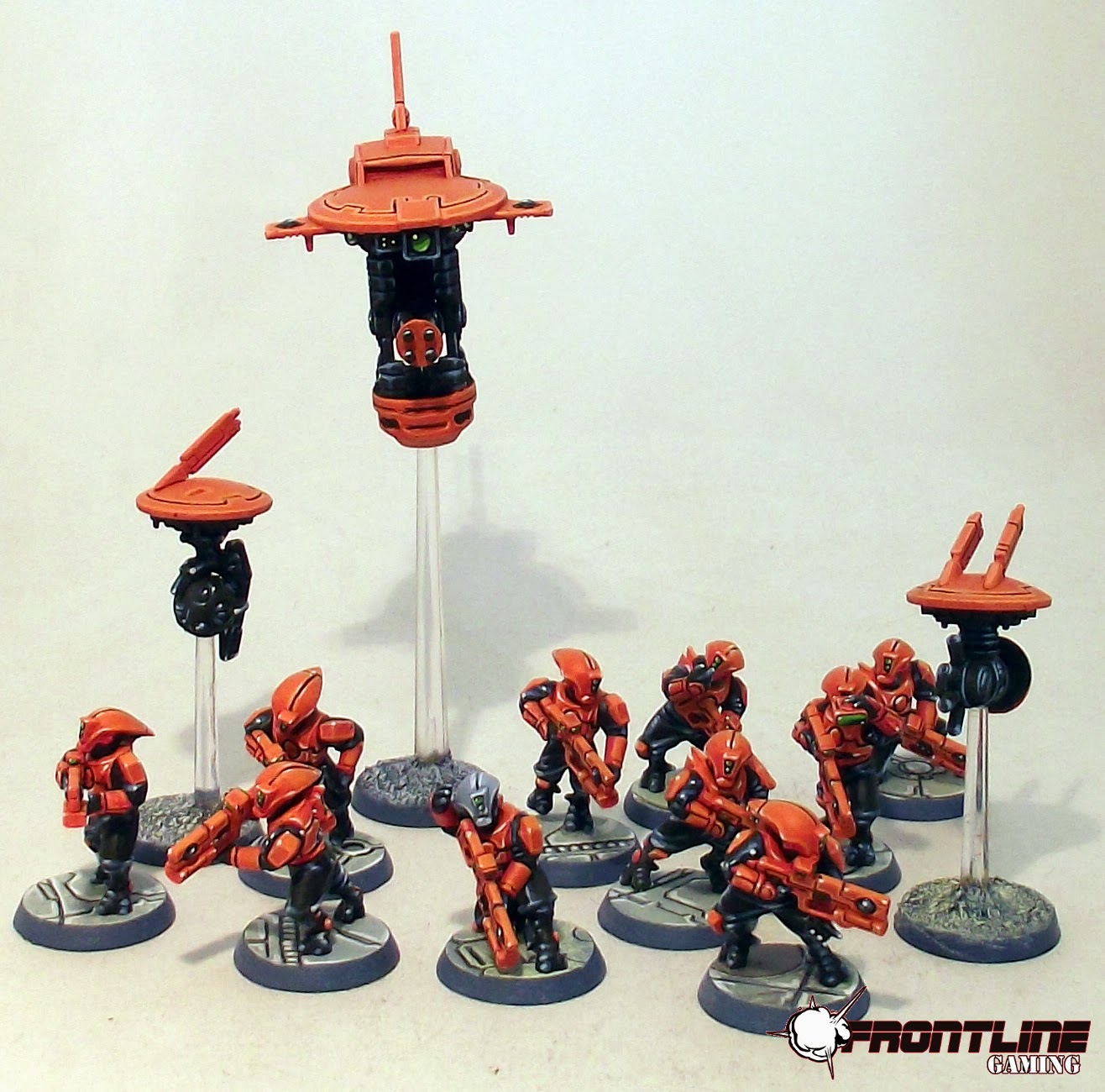 Pathfinders! These guys are always one of the first things I take out when playing against Tau armies. Why? They are relatively easy to kill and REALLY buff the other Tau units. Marker Lights are solid gold and as such, eliminate them ASAP. They allow Tau units to increase their BS and ignore cover which is what really boosts their incredible firepower. As the Taudar player, something to remember with your Pathfinders is that you do not have to expose them turn 1. Play them conservatively if you are going second or don’t need their firepower turn 1. Better to move out of cover and only snap-fire their weapons than to set up turn 1 in a good firing position and get wiped out having done nothing.

These next guys are arguably the number one target priorities, even over the HQs and Pathfinders, but I rank them lower on the scale only because most Taudar players will do everything they can to hide these guys, often reserving them. 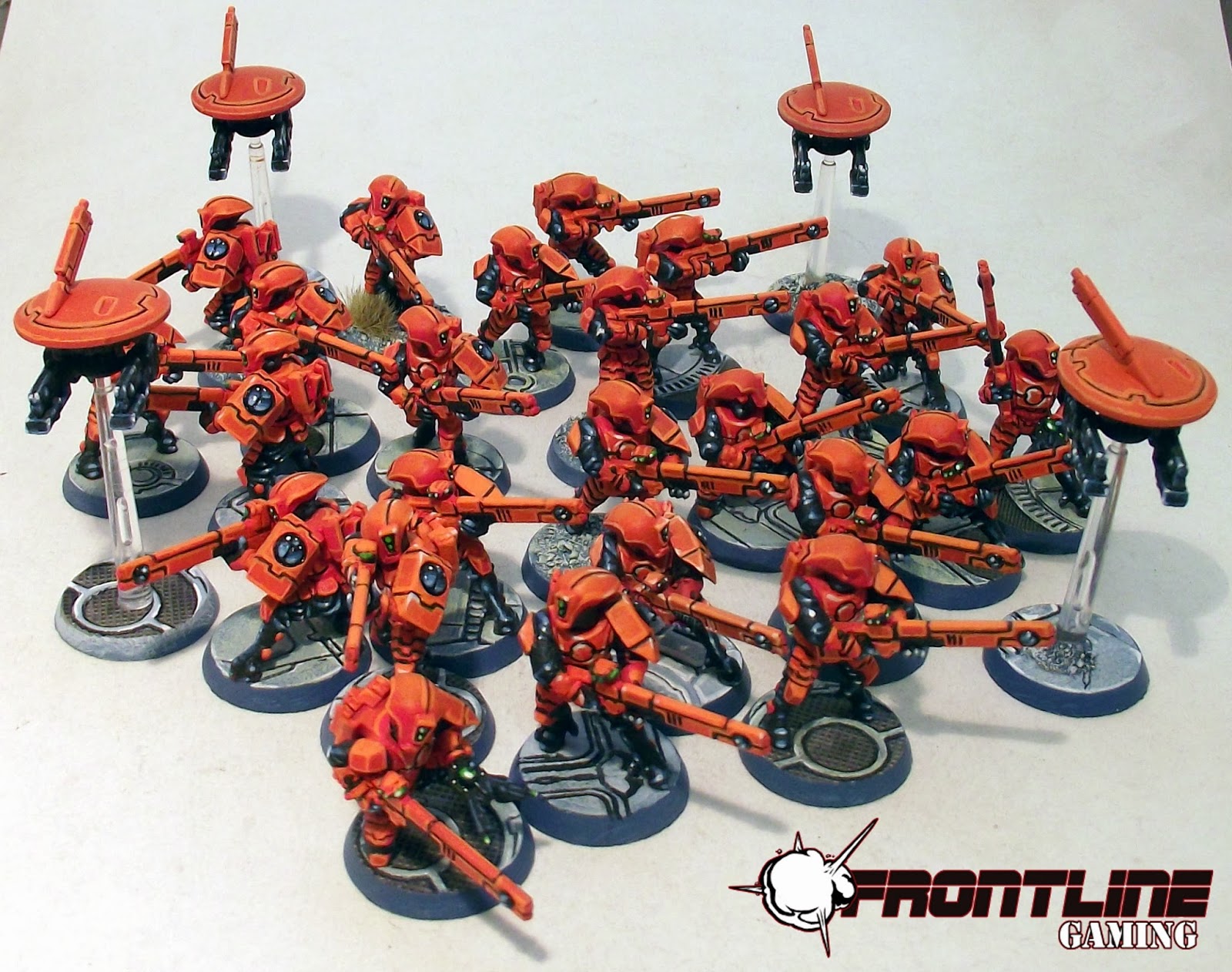 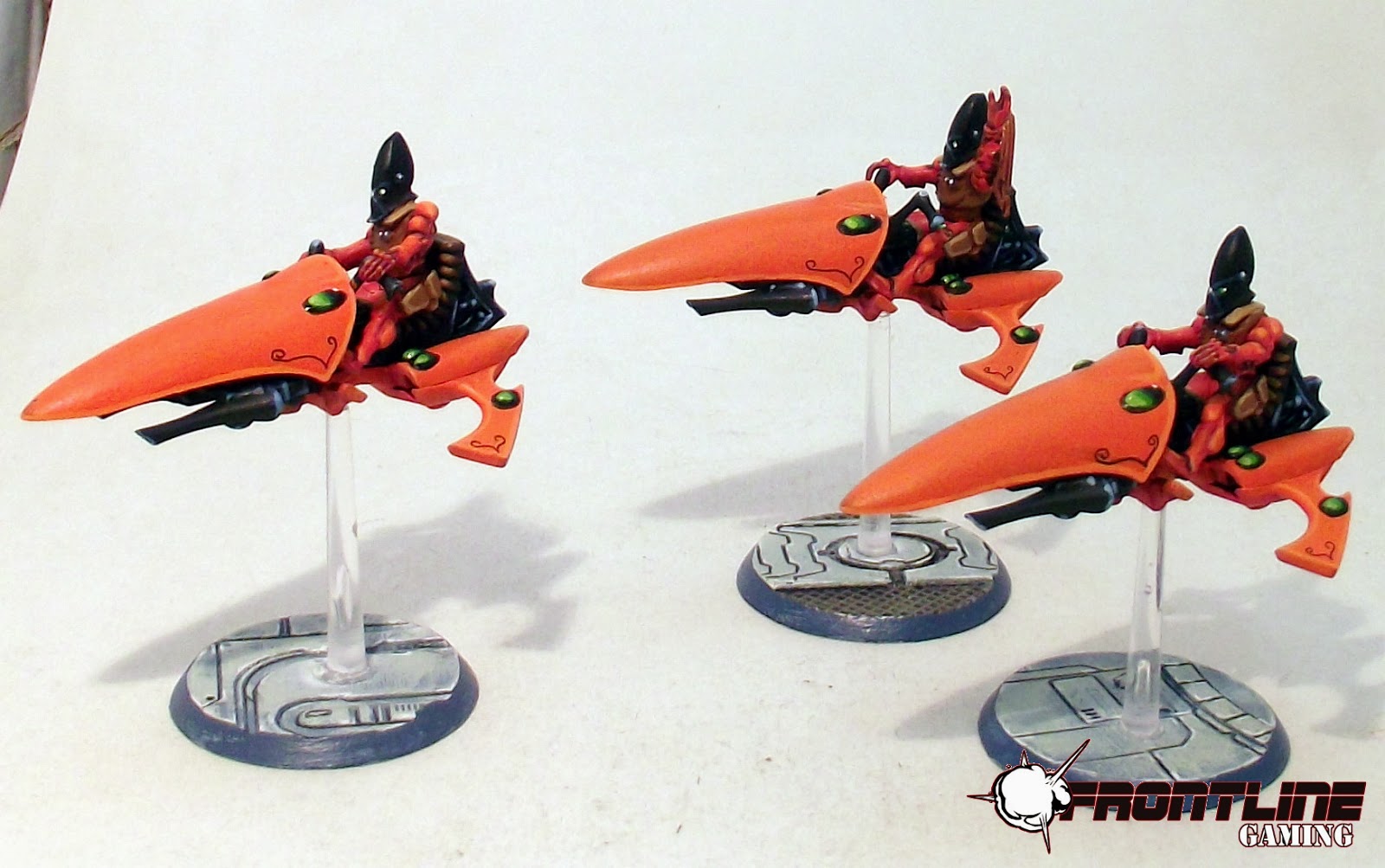 And yup, that would be the troops!

Tau troops tend to be a bit on the flimsy side, although they still pack quite the offensive punch. Eldar Jetbikes are easily one of the best, if not THE best point for point troops in the game. For a paltry investment you get a unit that is blisteringly fast, decently resilient and still has modest firepower, too.

However, they’re both going to get smoked in short order by concentrated fire. As a Taudar player, protect them at all costs as even if you blast your opponent off of the table, you can’t win an objective based game with no troop! You will almost always want to reserve the Jetbikes to keep them safe. And vice versa, as someone playing Taudar, kill these units if at all possible, even sacrificing your valuable units to do so, particularly Jetbikes as they are so good for winning missions.

Coincidentally, the Aegis Defense Line and Quad Gun make for a great piece of kit to add yet more Interceptor and Skyfire to a Taudar list ( allowing you to own flyer armies if you don’t play with loads of LoS blocking terrain) and keeping your backfield troops and support units safe! 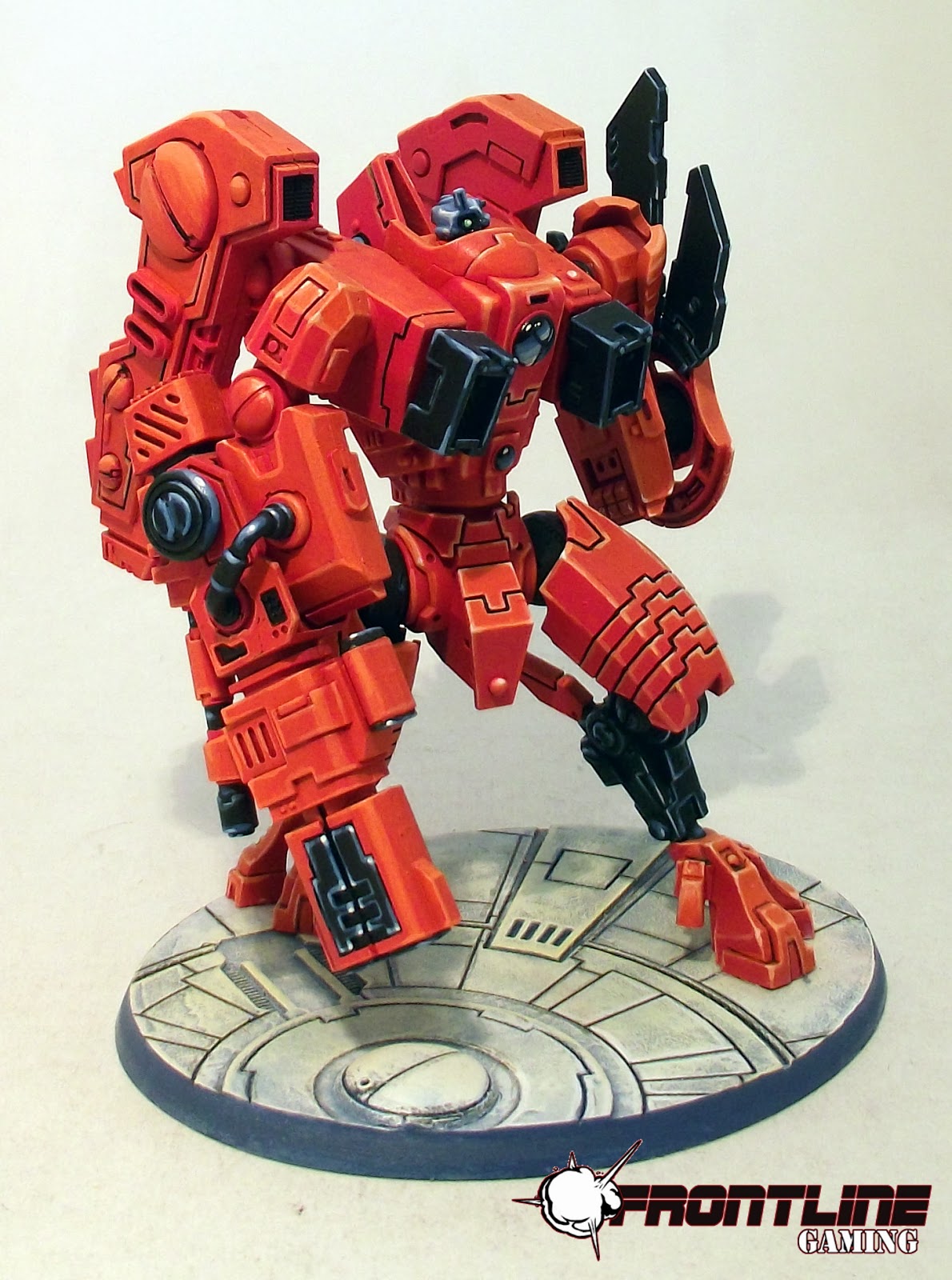 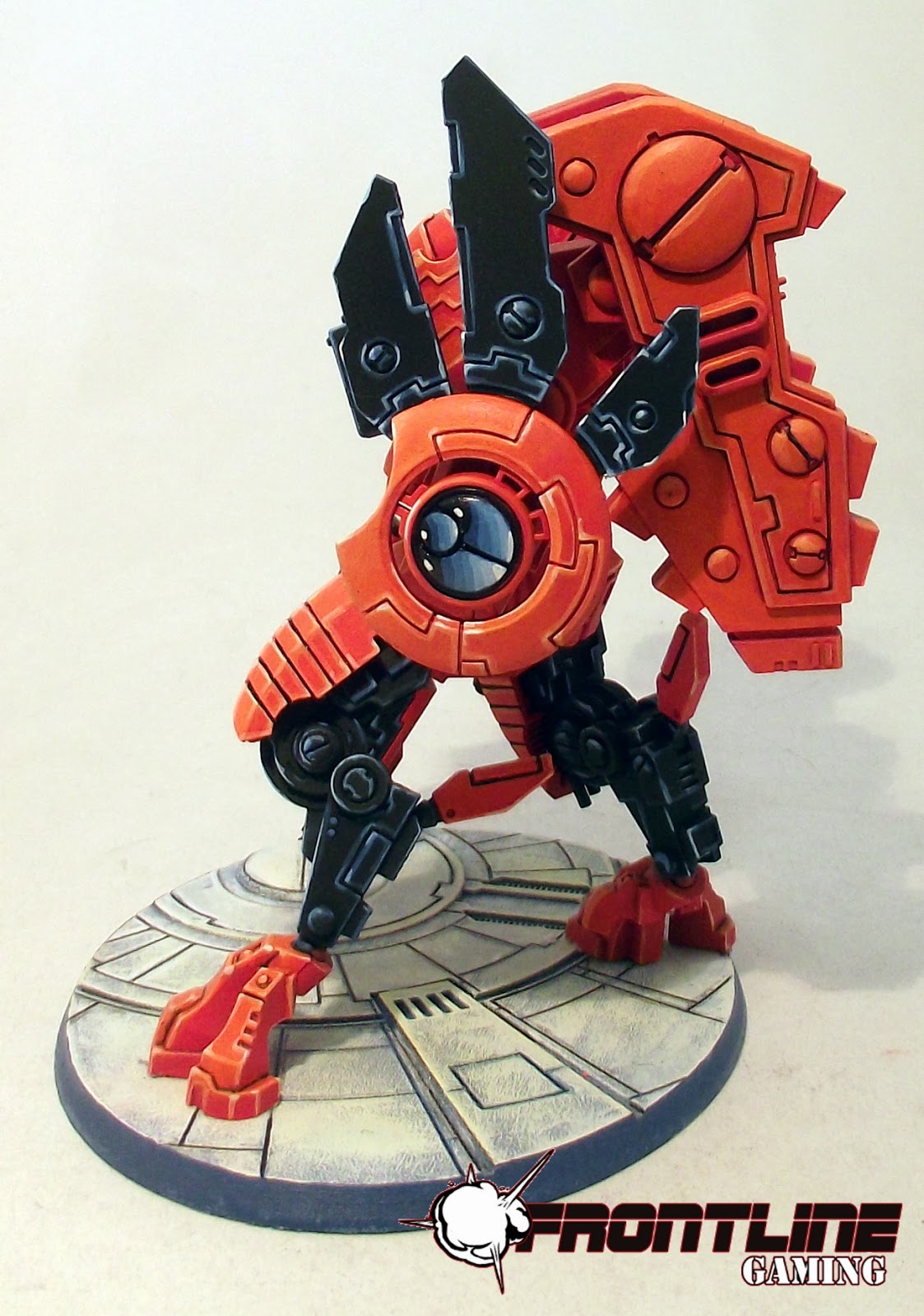 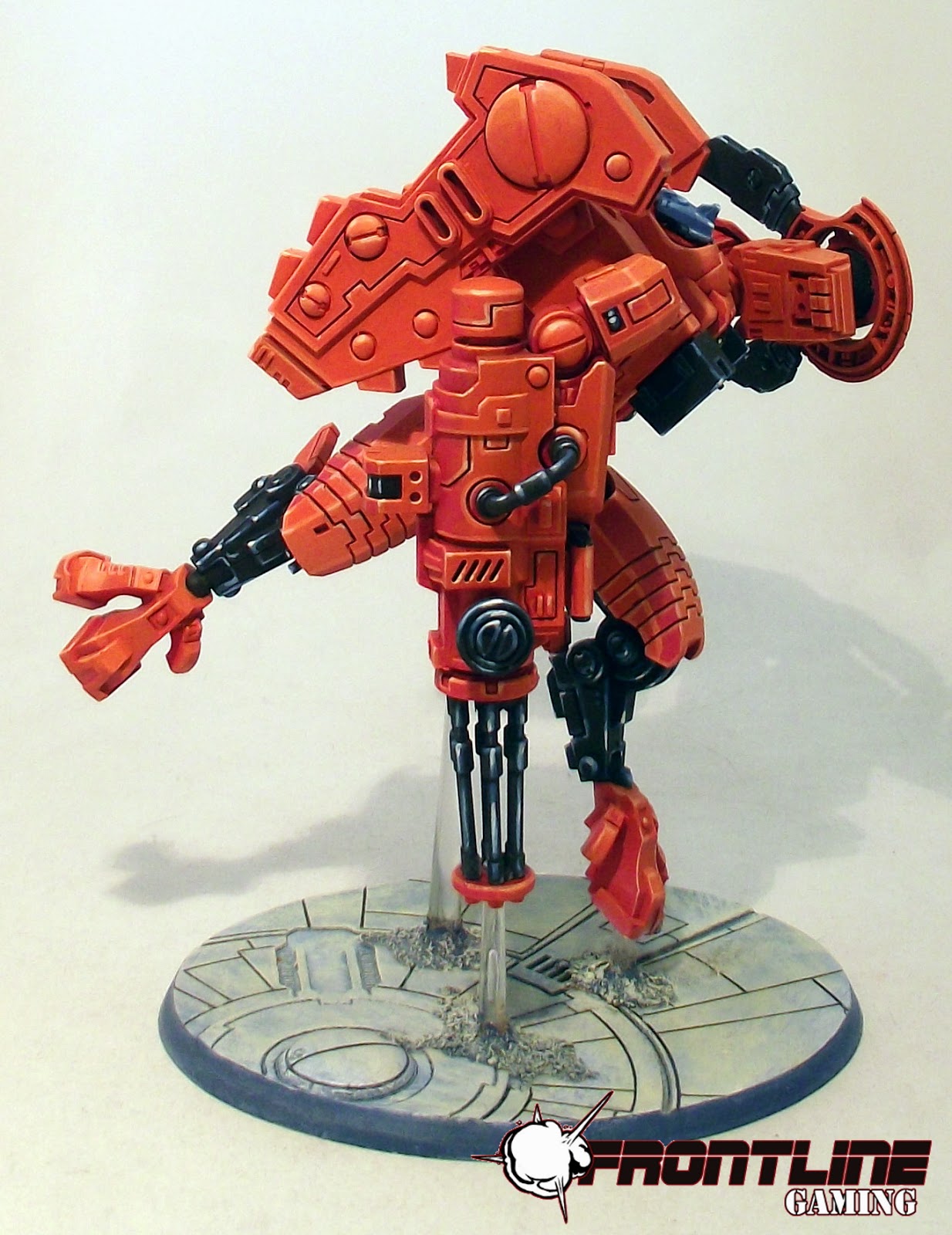 Yeah, these are the heavy hitters in a Taudar list. Good ‘ol Riptides. With Skyfire/Interceptor and incredibly powerful weapons boosted by Psychic Powers, Marker Lights and the Buffmander, these guys will wipe out HUGE chunks of the enemy army, solo. Plus, they’re fast and hard to kill to boot.

As the Taudar player, these are your best tools. Keep them safe, and take out enemy units that can actually hurt these beasts, first. Against Taudar, ironically, these guys are going to be fairly low on your target priority list unless you have a specific tool in your arsenal to deal with them. They are actually very reasonable without their support units. Take those out first, and then deal with these guys. Lock them in combat if possible (although they are surprisingly good in HtH with their AP2 attacks and 3++) and remember, THEY ARE NOT FEARLESS! Scare them away, pin them, run them down in combat, etc. if possible. 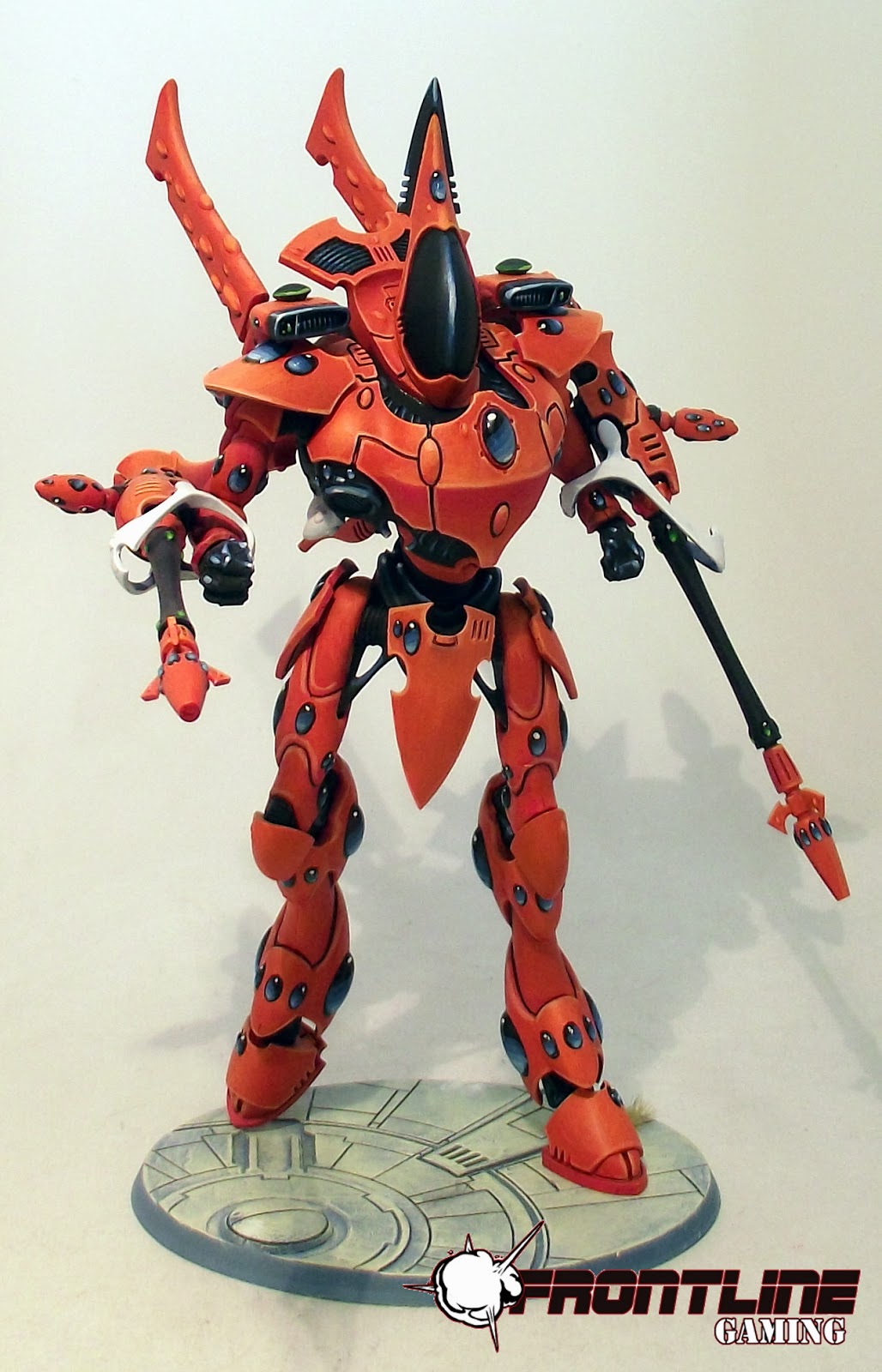 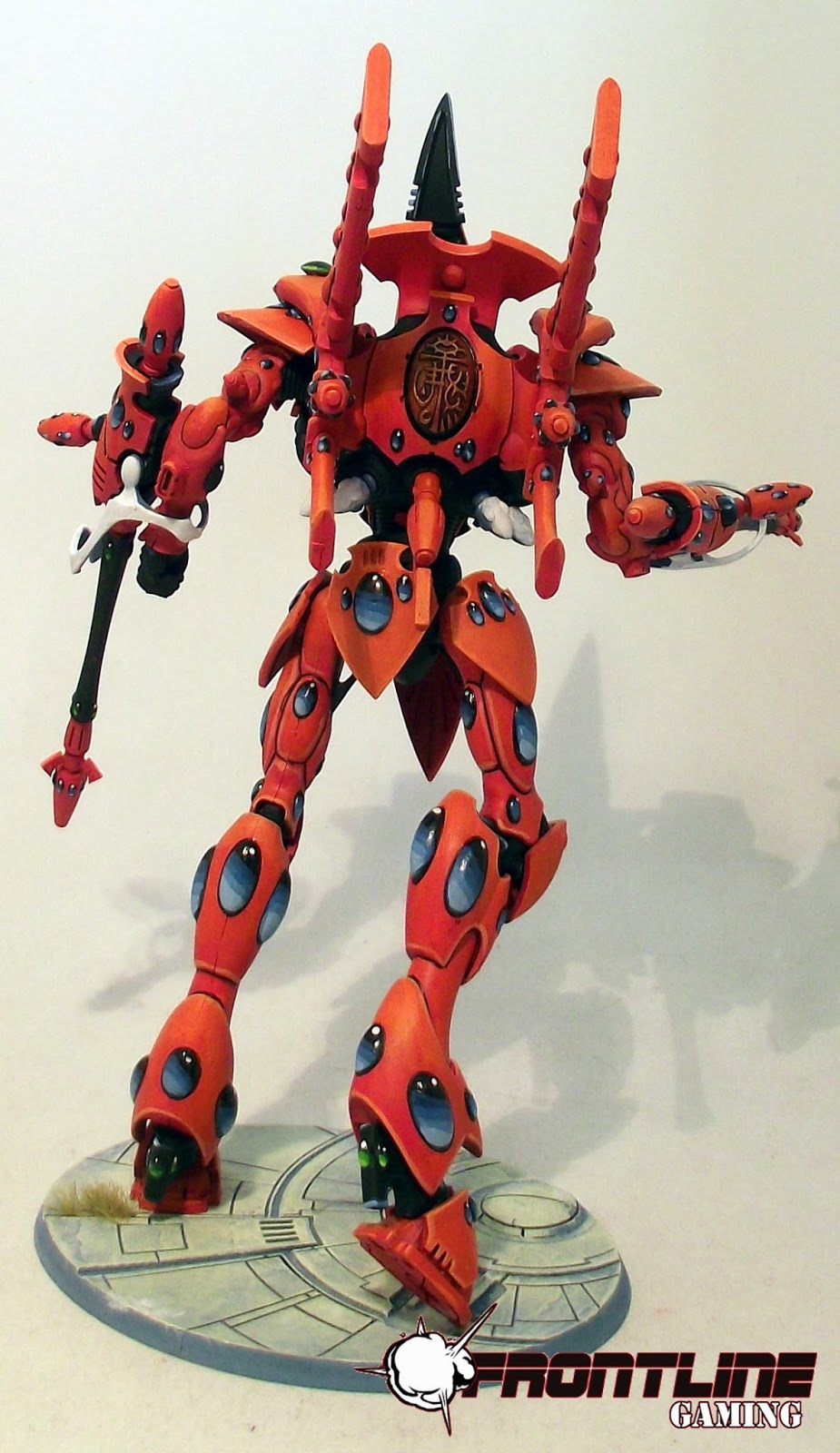 Big Daddy Wraithknight is the Yin to the Riptide Yang.

He is also fast, packs brutal AT weapons, can beat on things in assault and is very durable but is Fearless and not as easily taken out by many low AP weapons due to his high strength and ease with which he can get a cover save. He works great at applying pressure up-field to keep attention off of the Riptides. As the Taudar player, Big Guy will often be your aggressive unit, pressing the attack. He will also often die but almost never before wrecking havoc. If you find yourself playing against an army with the tools to smoke him (Grav weapons or Poison, for example) play him more conservatively. Otherwise, smash your opponent over the head with him.

On the other side of the table it’s a bit tougher. You will often be forced to deal with this guy as he will be coming right at you. A good list in 6th ed will have tools to deal with MCs so hopefully you have a tool in your toolbox to take this guy down, otherwise feed him units to slow his assault, and try to tarpit him if you can. He doesn’t have a ton of attacks so if you have a unit that will reliably hold in combat, you can keep him pinned down. 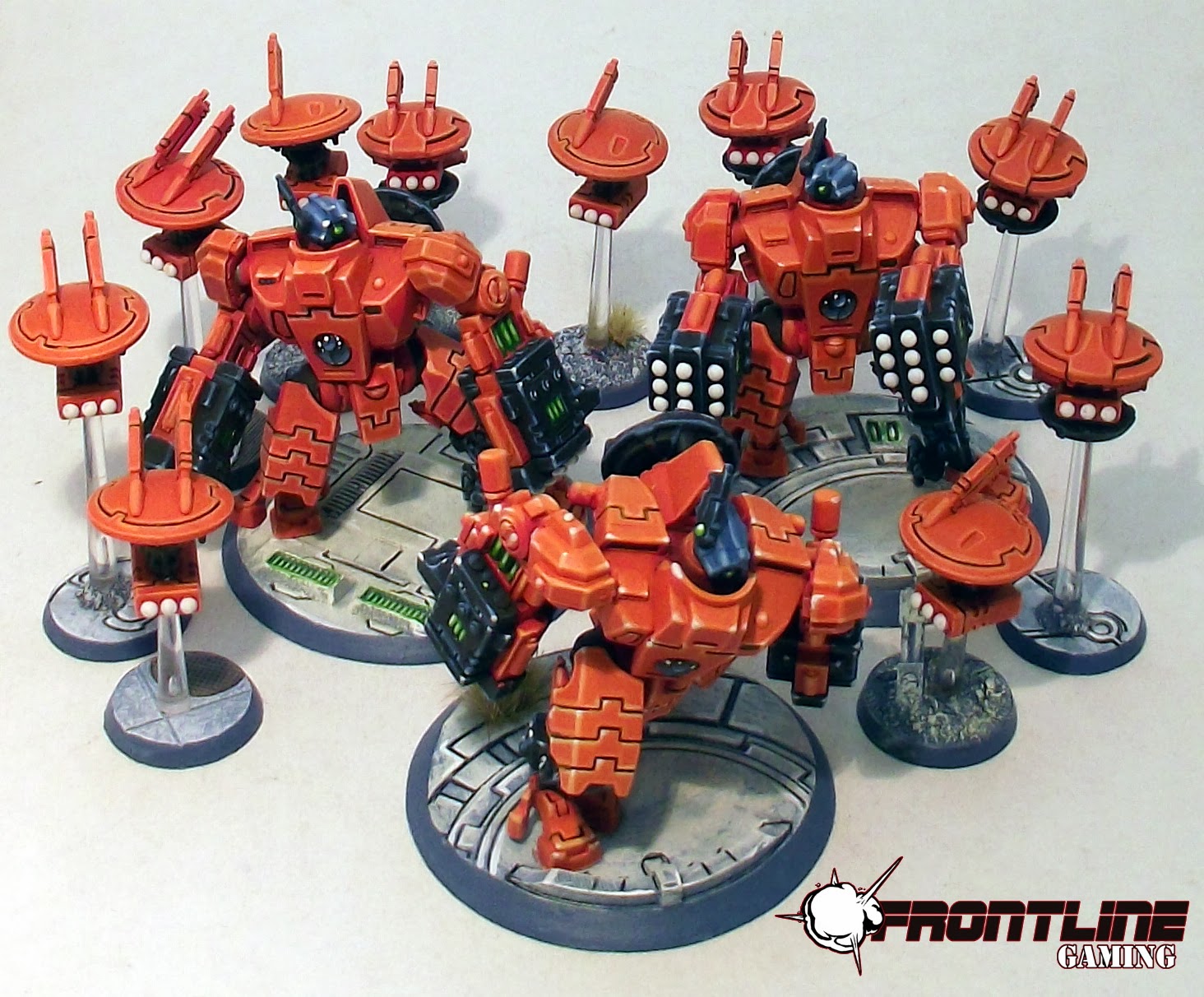 Missilesides are pure death. Wow, this unit is brutal. The sheer volume of high strength fire this unit packs, particularly when backed up by support units, is devastating. As the Taudar commander, this unit will routinely be your biggest sledgehammer. A player that isn’t prepared for what these guys can do will get absolutely creamed by them. They are slow, though, and have somewhat limiting range. You need to position them well to get the most out of them or a smart player will destroy you from just outside your effective range. Don’t be afraid to move them if you find yourself in a bad position as in later turns, you will own midfield.

Against Taudar, you again want to destroy the support units first and then tackle these guys. Stay out of their range and try to make them run away if possible by forcing morale test through killing Missile Drones, Tank Shocks, etc. Double them out with high strength, low AP weapons if possible, or run them down in assault. Usually though, the easiest way to deal with them is to simply not engage and stay out of their range.

Remember, as powerful as this unit is, it can only shoot one of your units a turn, typically. So, force it to shoot your disposable units and keep the heat off of your more important units. This is also a good trick for assaulting Taudar: declare a multi-assault with a disposable unit, draw all the overwatch to keep your heavy hitters alive. If anyone survives to make it, units that get locked in combat can no longer overwatch! Nice.

So there you have it! Some guidelines for playing with or against the deadly Taudar. And don’t forget to get your raffle tickets at the LVO to possible walk home with this beauty and have a tournament ready army with it’s own carrying case of your own!

26 Responses to “Taudar Tactics: Playing With or Against Them”