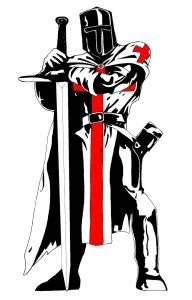 Next up: High Marshal Helbrecht of the Black Templars! As always, check out the Tactics Corner for more good info!

Helbrecht of the Black Templars is up on deck, and ready for review! The Xenophobic leader of the Knights in Spaaaaaace! is described as a peerless fighter that slayed a Daemon Prince with just his combat blade. Can he match those feats on the tabletop? 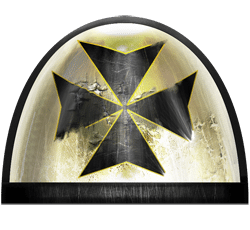 Helbrecht is described as a combat powerhouse, however in reality he is anything but. He sure as hell isn’t going to be killing a Daemon Prince with a combat blade unless that Daemon Prince just got run over by a Land Raider, is blind in one eye and lame in both arms! Helbrecht is also a force multiplier with his special ability but it is not always the easiest ability to use, much like Ultramarine Chapter Tactics. Helbrecht is also slow, and for some reason, does not have Orbital Bombardment as the other Chapter Masters do. He is also not very cheap for what you get, weighing in at 20pts under two Thunderfire Cannons.

Well, to put it mildly, Helbrecht doesn’t impress me that much. He sure as shit better hope he never catches Ghaz per his fluff, to fight in glorious single combat as that won’t end well for the old boy! Ghas would be picking his teeth with the Sword of the High Marshals after a single round of combat.

Helbrecht is a combat character that really isn’t that good in combat. A Power Sword is pretty crummy. Yes he can once per game gain Furious Charge, Hatred and Fleet, but that is not going to help him in a fight with an opponent that has a 2+. Yes, in a challenge he does gain rerolls to hit and Rending, but that isn’t going to help when a Monstrous Creature smashes him at In9 or he is facing someone with a 2+ and more than 1 wound. As all BTs, he does have Crusader and Adamantium Will which are really useful. On the charge he can get 7 strength 5, AP3 attacks with rerolls to hit, plus rending if he is in a challenge. He can also blast someone with his Combi-melta for a big kill on occasion. Not bad, but he can only pull that all off once per game whereas every other round of combat he is mediocre at best. And why doesn’t he have a flippin Bolt Pistol, by the way? And there is where he falls flat: compare him to a generic Chapter Master.

The generic Chapter Master can do almost everything Helbrecht does, better. Let’s look at a straight comparison: a CM with Artificer Armor, Power Fist and Combi-Weapon. That comes in at 15 points less than Helbrecht. In that comparison, there is none. Helbrecht is clearly better for the points. He really is good against anything lacking a high initiative str 8+ attack or a 2+ save. His abilities are far better than that 15 point difference…but who cares? Not many folks are going to run their CM that way unless they do it for fluff reasons. To be fair, you need to compare him to what he is actually competing with: Captain Kill ’em All.

A Chapter Master on a bike with the Shield Eternal, Artificer Armor and weapon of your choice, typically a Fist or Hammer. That is a model that can fight damn near anything head to head and still gains rerolls and rending in a challenge where Helbrecht is vulnerable to anything that is 2+ and/or has strength 8+ attacks. The CM doesn’t have those limitations and is MUCH faster to boot. Oh yeah, and Bikes as troops. Helbrecht can be quite good but in general terms is going to often be a liability where the Chapter Master almost never will. Oh yeah, and this Chapter Master, for whatever reason, remembered to bring his cell phone to radio in that Orbital Bombardment.

So we know Helbrecht isn’t a good enough combatant to really warrant his points when compared to what you could be taking in that slot. That’s what we call opportunity cost. He isn’t bad, just not as good. That said, what if you do want to take him? How do you make him work?

Helbrecht then becomes his special abilities. BTs are designed to be run in big units on foot per their fluff and Helbrecht helps with that by giving all of the BTs Fleet and Hatred for a critical turn. Nice. That is a very powerful ability, however, don’t forget you are working with a MEQ stat line which is a liability in and of itself. They just aren’t that good in combat. When faced with Daemons, Xenos and such that swing first, ignore your armor and often cost less points, you are just not going to get much return on investment with an assault oriented marine list. That isn’t to say they can’t win at all, just that it’s hard as hell in the context of a tournament meta. So what if you have Fleet and rerolls to hit in the first round of combat if you get slaughtered before you swing? May as well take Tactical Marines who still blow up tanks as well, still beat up weak infantry almost as well but are scoring units and can shoot more effectively. Crusader squads bridge that gap fairly well and can hit hard, it just isn’t something to build a list around, IMO, if your goal is a TAC tournament list.

Not to be entirely negative, if you play against lots of other MEQs, or do not play against many Nids, Daemons, MCs, or Eldar/Dark Eldar assault units this power will work quite well and help you to consistently get the charge and win combat. So in that context it is awesome. In the current tournament meta though, it isn’t going to amount to much. The assault units we usually do see will typically walk right through a unit of Marines like they weren’t there.

A list with Helbrecht at the helm that will work quite well though, is 30 Hammernators. They with Adamantium Will, Crusader and army wide Hatred and Fleet for a turn is REALLY good. That would be damn fun, too! They can survive heavy fire, Heldrakes, Riptides, etc. and then smack the piss out of what they touch when they get across the table, too. His abilities really do help that style of list out a lot, but then you have to ask the ever present question: is that better than a total badass Biker CM? That Biker can get a unit of Hammernators into combat fast by daisey chaining them behind him, and hits so much harder. No, he doesn’t boost your army for a single assault phase, but he is better in every single round of combat.

Helbrecht also jives quite well with multiple Crusader units in Land Raider Crusaders increasing the odds of getting the charge off with units in LRCs and then boosting damage with Hatred. Again, you are simply working within the limitations of Space Marines themselves so just be aware of that. It’s not fun to buy, build and paint a combat army and then find yourself in a game against another combat army that quite simply outclasses you, point for point. If you do want to play this style list though, Helbrecht buffs your units for that big charge quite well.

In summation, Helbrecht is a C character. He isn’t bad, he can be quite good, he just often will be points wasted which is why I think you will rarely if ever see him in a tournament list.