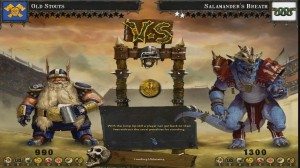 Grant and Garrett send in a report of their game!
Grant:

Me and Garrett played a fight to the death.

Garrett advanced a little and fired his cannon too short of the skinks.

I miscast twice and one of my wizards, forgot his one spell and the other took a S10 wound.

We advanced toward each other, my skinks marched up tried to take advantage of the forests and tower in the middle.

Garrett shot his thunders at my skinks to no success, maybe killing one and the cannon tried to fire at the skinks again and missed.

Garrett held his warrior unit with the thane back from my bastildon and prepared to receive the charge.

In my turn I charged the warrior unit with my bastildon, rolling a ten on my distance to barely get them. Garrett decided to stand his ground.

I marched the skinks up and shot at the warriors not engaged by the bastildon and wiped out eight of them, that caused them to run.

In combat the bastildon totally whiffed and only did one wound but the thane was able to put one back on him.

Garrett rallied his fleeing warriors, refacing them towards the skinks.

Garrett shot his thunders and cannon at one of my skink units but only killed three, who passed their leadership check.

In combat I killed three while his thane did another wound, he made his leadership

In my turn, I marched the six skink unit right beside the three warriors and the others next the cannon and the thunders.

In shooting I wiped the three warriors out, killed seven thunders and wiped out the cannon and it’s crew through poison. The thunders made both leadership checks.

In combat I killed the rest of the warriors and put one wound on the thane, who put one more wound on me but failed his leadership and got run down.

Garrett shot his thunders into the skinks and killed two.

I marched all the skinks around the thunders and shot into them, wiping them out.

Game Over: Total Victory for the Lizardmen

Posted on September 11, 2013 by Reecius in Battle Report, Fantasy

I would suggest for anything under 1000 points to limit the use of monsters that are over 3 wounds, they are incredibly powerful shock monsters, and games under 1000 points should reflect the nature of patrols, at 500 points we didnt even allow characters other than heroes(might have even only been unit champs), and no magic weapons to reflect that they are far to precious to be putting in a combat situation unless the need was great (a large battle), but bringing things like the stega and a hellpit abomination, pheonix’s, treemen, giants, and other big nasties should be reserved to the 1000+ game range, not to knock on trying some things out but that is just abusive at 500 points very very abusive even if he does have a cannon or two

Yeah, that may be a good idea, but we’re just letting folks do what they want at this point. We’ll see if we need to add restrictions as we go, though for sure. Thanks for the input.