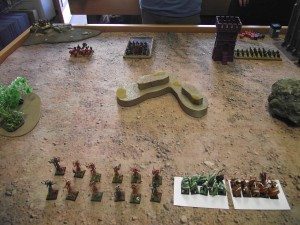 The beginning of the fight! 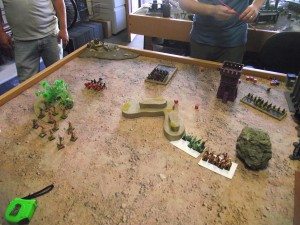 The Gobos start running away! 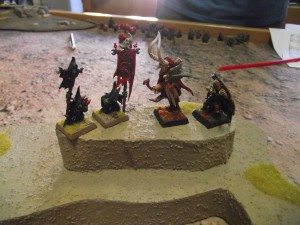 The Gobos and the Woodies face off!

Da’ Rusty Moonz advanced scouting party, led by Krink’ll Kuttah the battle standard bearer, was ambushed by nasty Wood Elves. Panic was the order of the day, the turning point was a Doom Arrow that caused my general and shaman to run and putting them in the path of a lone surviving Dryad to wipe them out.

My archers rallied and nearly killed a unit of elves with the general it. The hero of the battle was Da’ Redd Bombah, a doom diver catapult that only missed one volley the entire game.

Frugeon’s warband was victorious! They peppered the pesky Gobos with arrows, watched them flee in terror or fight among themselves while the Elves ran circles around them. On to the next victims!

Victory to the Wood Elves!

Posted on August 30, 2013 by Reecius in Battle Report, Fantasy