You are here: Home › 40K › Battle Report › Tournament report › Golden Throne GT Report Game 3
Sorry for the delay everyone, just been busy with getting caught up. Here is the game 3 report from the GTGT!
Game 3: Big Guns, Dawn of War
You can see my game 2 report, here.
So, after 2 tough games with my Marines and Wolves and narrow victories, I was on to game 3 against Bigpig and his Nids! He and I have played previously as you can see here.
Here is his list!
Swarmlord
Tyrant guard with Lash whip
Flyrant with 2xDevourer
Tervigon; toxin sacs and three powers
Tervigion; Toxin sacs, adrenals, and two powers
15 Gaunts
10 Gaunts
10 Gaunts
18 Gargoyles; Toxin sacs
2 biovore
2 Hive Guard
2 Hive Guard
6 Ymgarl
6 Ymgarl
Doom in a box

I knew this was going to be a tough battle not only because Vince was a good player but also because Nids can really stick it to my units. Poison Gants and Gargoyles are great for killing Lysander and Termies, and Swarmy will walk through anything in my army with ease. However, I had the right tools to counter the bugs. Sternguard LOVE Nids! Muahaha! And with Lysander twin linking them, they are savage. Jaws of the World Wolf is another brutal tool against Nids as are Long Fangs. I was not as worried about the Ymgarl as I would typically be because Wolves with counter attack can fight off small units of Ymgarls fairly well.

Vince got first turn, no Night Fight. I did my best to spread the objectives around in the corners of the table as Nids (or any assault army) like to have objectives close to one another so they can easily sweep them. By putting objectives in corners of the board, my outflanking Scouts would hopefully be able to jump onto them from reserves and be far enough away from the action to stay safe. 2 objectives did end up mid board, though, one in the center and 1 centrally in Vince’s deployment zone as well as mine. Vince deployed over a broad front, I deployed defensively, mostly out of LoS with only my LRC clearly in sight, but Vince had almost nothing to damage it at range. 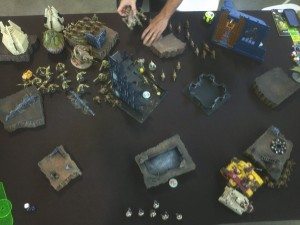 Vince’s opening move was pretty non-eventful, he basically came at me and sent his Flyrant laterally to set up a turn 2 move, not wanting him to go out on his own and possibly failing a grounding check and getting smoked. His shooting was incidental.

I went for a bold opening move. I dropped the Ironclad and Grey Hunters behind Vince’s army. I had two specific purposes in mind with doing this. The first was to hopefully earn my both First Blood and a Big Guns point by killing the Biovores (who were also the biggest threat to my scoring Scouts). My boys dropped in, opened fire and dropped the Biovores down to a single wound on the last model. Doh! That was a bummer.

The Ironclad came in and charged the Gargoyles, killing quite a few of them with his H.Flamer before assaulting and tarpitting the unit in combat. That was key as the Gargoyles could have gotten into my lines and tied up my Rune Priest and Long Fangs, killing them with assistance from the Ymgarls. I needed that unit to stay mobile. My thought was that the Ironclad would eventually kill the remaining Gargoyles and break free to charge again.

However, both units would succeed in their secondary function: redirecting traffic. That is one of the best things about Drop Pods is that it forces your opponent to react to them. Armies like Nids need to keep coming at you and if you can force them to split their forces or move backwards they lose precious time to actually fight in assaults, where they win the game.

Vince reacted by charging the Grey Hunters with a Tervigon and Gants and dropping the Doom on them. The Grey Hunters actually performed better than expected, as I had mentally written them off after they failed in their task. My hope was that now that would be just gum things up for a turn or two…and they did that and more! The passed 3/4 Doom ld checks on 3d6 with ld8?! And, they killed all the Gants and were beating up on the Tervigon with their Power Axe (which I use now instead of MotW) and high amount of attacks. Vince was forced to send Swarmlord in or risk losing the all important Tervigon. The Drop Pod eventually finished off the last Biovore with its Storm Bolter…nice one!

The Ymgarls came in and wrecked my Razorback, the second unit came out of the central piece of terrain, but were out of range to charge anything and as such hid to wait for a late game move.

My Sternguard came in with Lysander and smoked an entire unit of 15 Gants in the backfield. Damn they’re good! They were also now a huge threat on the flank and near the central objective. They came in on that flank also to protect my Scouts which both outflanked onto the same side, behind the big blue building. At first I was made as I had hoped to split them, one on each side, sitting on an objective each, but this actually turned out to be a blessing in disguise. The reason being, that Vince’s Flyrant still had not fully committed to the game and he could have just smoked one Scout unit and then flown over to the other side of the board to kill the other by end game. However, now he would risk getting blown out of the sky by twin linked Hellfire rounds or come down to assault and then meet the business end of Lysander’s hammer. Both likely result in the Flyrant’s death. 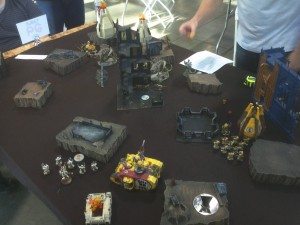 Vince dug into me with the Ymgarls but I countered with everything and killed them. My Ironclad was slowly grinding down the Gargoyles 1 at a time, but after the Grey Hunters folded to the unstoppable might that is Swarmy, the Tervigon came over and smashed the old boy to bits. He had done his job though and killed the Gargoyles and clogged the Nids up in the backfield.

As the game wound down, Vince was losing resources and was out of position and worse, his Terivgons had pooped out. His Flyrant committed to the offensive and was blasting my Long Fangs and killed all of my Razorback Grey Hunters before I finally grounded the jerk and killed him. The Rune Priest was letting lose with Jaws and popped the Hive Guard.

I was holding my Termies back as I had done the entire game, because I knew the final showdown would occur on the central objective. I had my objective, and a corner objective. Vince had one of his but was only in range to strike at the central objective before end game. He had to go for it. We both positioned up to fight over the objective and sent in all the tools at our disposal. Lysander came in with Sternguard, blasting the remaining little bugs and the Librarian with Termies killed the Ymgarls and then made it into combat with a Tervigon, smashing it too before the dues settled. The Doom came in but with Null Zone didn’t stand much of a chance and got blasted by the LRC and again, I kept making my LD checks and shutting his powers down, it was really lucky. I kept my boys out of easy assault range of Swarmy as he was the only thing left that could really do work, but with Null Zone and hammers about, plus twin linked Sternguard, it was no easy task and in the end, Swarmy didn’t make it in to combat.

In the end I held 2 objectives to Vince’s 1, and had picked up a Big Guns point from the Biovores as well and my Scouts got me Line Breaker. Vince had First Blood. It got a little lop sided at the end as I started to pull ahead but early and mid game it was tense. The heroes of the match for me were the brave Grey Hunters who while failing in their mission, held up a huge chunk of Vince’s army for two turns! It was crazy how many ld checks they made. They never ran away and only failed a single Doom check. The Sternguard were again, champions and Lysander led them to glory. The Scouts, again, got it done. They are great little buggers! They killed a small Gant squad on an objective and then took me an objective. They were some of my best men!

Vince played well, but was facing some tough Nid fighting combos. Great game as always, Vince is a class act and great opponent.

I am supposing you take Scouts over tactical Marines for troops since they can Outflank. Right ?

Was a good game, Reece. Well earned victory. I’ll get ya next time 😉

This game was a great example of the cascade effect (butterfly effect?) in 40k. One action impacts what happens later in the phase, turn, or game.

Good stuff. I enjoyed it.

Yeah I agree, sometimes you can’t see it either until it hits you. Something feels like a mistake in the immediate moment but it turns out to be a boon a few turns later.