Taking it old school with a written tournament report!

So why Orks and not my Footdar as I had intended?

When we all arrived at the shop to carpool to the tournament, Frankie Five Fingers and Grant Theft Auto both had Eldar/Dark Eldar….just like I was going to play! So I didn’t want to be yet another Eldar/Dark Eldar army at a small event, particularly considering how brutal that combo can be. I figured I would do something different to make the event more fun for everyone.

So, on a whim I brought my Trukk Orks!

Oh yeah baby, Orks in Trukks! If one Trukk sucks, I’ll have 6, thank you!

This is actually a super fun army to play. It is crazy fast, tons of units for target saturation and a surprising amount of fire power. It pretty much always gives up first blood, though, and winning a KP game is not easy….at all! However, with that many troops, that are that fast, and hit pretty hard, plus protection in the Trukk, it is REALLY hard to stop me from winning an objective game. Plus, the army shoots really well, and keeps pressure on the other player to deal with my fire base. 25 Lootas is no joke and they plus a Quad Gun are actually really good AA. 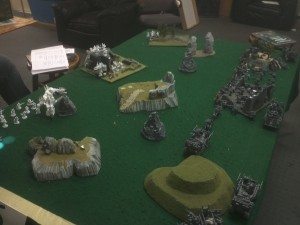 All that primer and bare plastic hurts my eyes!!

Aside from the lack of paint, this was a very fun game. Fred was a good player and apart from the Noise Marines in Elites, I thought it was a really good list, too. I think a kitted Slaneesh Lord to make them troops instead of the DP (which in my experience usually under-perform) would have been solid as it would have also shored up his low troop count.

Anyway, it was a fun game, as I said. I thought I was in hot water looking at the lists. He certainly had the tools to deal with me, but my large amount of units would be a big help as he couldn’t kill all of my stuff fast enough.

He got first turn, but failed to get First Blood (he did get it turn 2, though)! Haha, I couldn’t believe it. He damaged a lot of my Trukks, but none of them popped. After that, I knew exactly what needed to happen. I bum rushed his troops with mine, knowing that if I killed them, he couldn’t win. As it was Big Guns, I had 8 scoring units, 6 in transports so it would require destroying 14 units to get to them all, which he simply didn’t have the firepower to do in 6 turns.

Had he reserved his troops my task would have been more difficult. As it was, by turn 2, I had destroyed the majority of his scoring units with my Boys. They are SO fast, from a central position they can essentially charge any point on the board by turn 2. Plague Bearers and Cultists just can’t take a round of shooting and a charge from Boyz.

Fateweaver was a huge PITA, flying around blasting me. I tried to ground him as if he hits the deck he is easy as pie to tarpit, but Fred made 13+ grounding checks! haha, he was lucky and used Fateweaver’s reroll the two times he did fail to save himself. I literally had a squad of Boys running around under Fateweaver all game hoping he’d hit the deck so I could pin him down in combat! haha. But with the Grimoire on, he was practically invincible with a 2++ reroll save. I did manage to ground his DP though, and a squad of boys kept him pinned down all game until the very last turn when it didn’t matter anymore. Using challenges to strategically prolong a combat is a good skill to develop.

My Warbosses killed his Forgefiend, Soulgrinder, the Noise Marines and the Hell Turkey (who had to go into hove mode to try and roast me off of an objective) while my troops killed his. The Bash Brothers were in good form this game! Those Biker Bosses (mine are Little Mork and Little Gork!) are seriously awesome units. He did his best to blast me off of objectives but that many Boys with the protection of a Trukk is really hard to chew up and in the end I held every objective, got all his Heavies and Line Breaker, but had little to no chance of getting Warlord. My opponent got Line Breaker and First Blood.

Besides not reserving his troops, his only real mistake was not bum rushing my lines with his GUO. I had nothing to counter him really, unless my Lootas and Kannons could kill him in shooting. He used his GUO to try and keep Big Bird buffed with the Grimoire, which isn’t the best use of his points, IMO. Had he rushed me, I would have had to pull my Biker Bosses back to counter them, freeing up his support units to keep shooting every turn.

Mikko and his Nids!

Doom in a sPod

So a really fun, mobile Nid army! This was a reserves army and it was really cool. 2 deepstriking Trygons, 3 units in sPods, Swarmy to protect the Tervies. Not bad for this type of deployment and mission. I think Deathspitters would be the better choice for that Warrior unit though, personally.

I know this would be a tough game, as nids tend to whip on Orks in combat. Plus, he had so many threat vectors to come in on and with Swarmy most everything was coming in turn 2.

When objectives were placed, there were 2 in each third of the board, per mission guidelines, with the 2 highest point objectives in no man’s land. As I lost the roll to go first and Mikko gave me first turn (it was Night Fight, Hammer and Anvil so no one was shooting first turn and we both wanted the last chance to grab objectives) I deployed my army in two halves. One was defensive with my Warlord/Warboss for counter attack, two units of Boyz out of their Trukks in reserve to come onto my base objective along with the big unit of Lootas and the Big Guns. They deployed behind the Aegis in a corner of the board to mitigate any damage he could do with sPod units. The other half was 4 units of Boyz in their Trukks, the non-warlord Warboss and the 2 little Lootas units who would jump in the empty Trukks turn 1.

Mikko didn’t try to seize and I bum rushed his home base objectives in an all-out Ork rush! I needed to put heavy pressure on him to try and kill his troops and force him to draw some of his reserves back to protect his base as I didn’t want all that pressure coming down on my base. My ploy worked! By turn 2, half my army was in combat. I got super lucky with both of his Tervies pooping out turn 1, which allowed me to kill all the little bugs and tie up the Tervies in combat. It took a long time and I lost most of my assault Orks, but by game’s end I killed all his troops in the backfield and kept Swarmy from breaking out into the field (although he did beat up on some Boyz like a big bully!). His Warrior squad did land on the central 4 point objective though, and I didn’t have the fire power or Boyz left to get him off of it.

He made a play for my base with his Tervigon’s, but one of them got smoked by Lootas and Kannons.

When it was all done with, most of both of our armies were pretty battered, but I held 5 points of objectives to his 4! I also got First Blood and Line Breaker, neither of us got Warlord and neither of us had Fast Attack units for the Scouring bonus points.

This was going to be a tough game. Tau firepower just sticks it to Orks in a bad way, particularly my build. I needed first turn to make it a game! Going first I would have 72 boys and 2 warbosses in his face and he would not be able to kill even half of them (he didn’t have enough units to shoot them all!) which meant I would be hitting him with a brutal turn 2 charge, probably wiping most of his army out.

Unfortunately for the 3rd game in a row, I lost the roll to go first! haha, but I did win the roll to place objectives and I put three essentially in my deployment zone. Israel made a big mistake by placing his on opposite sides of the table on his side, in the corners. He then deployed centrally, with both objectives then difficult to defend. It meant my otherwise lame warlord trait of outflanking with acute senses all of a sudden became game winning! I subsequently decided to outflank my Warlord with a unit of Boyz.

I set up for a seize, but didn’t get it. At this point I knew exactly how the game would go: a race against time. It was simply could Israel kill my boyz fast enough to blow them off of the objectives before the game ended. I tried to kill his troops but my dice were awful. I managed to kill 3 of them by the end of the game but his Warlord trait (reroll reserve rolls) helped him keep one unit off the table till turn 4 and by then I didn’t have the tools left to kill the unit.

I sent a distraction force up one flank to keep him honest and force him to deal with 2 Trukks and 2 units of Boyz on one of his objectives. They died like Orks, but did kill a troop before biting it. My Warlord outflanked onto the opposite side of the board killing a troop there and taking that objective. The middle was a massacre as Orks were getting murdered wholesale! Haha, I just sat in my Trukks on objectives dying steadily hoping the game would end soon. Israel did advance one suit commander and a Riptide to contest one of my objectives and after 2 failed charges (even with WAAGH!) haha, I finally managed to make it into the Riptide on the last turn with my defensive Warboss, killing it and securing me another objective.

I ended up taking it, 3 objectives to 1 despite getting my ass kicked all game long. We both got Line Breaker and Israel got First Blood.

So in all a fun tournament. I was being a bit of a cry baby in the last game because I was so frustrated that I really couldn’t actually fight back, just sit and die, but that was my fault for writing the list I did. Sorry to Israel for being a bit negative that game, as the rest of my games we were laughing and goofing off a ton like normal.

The Orks are a fun army! I always really enjoy playing them. They are still viable too, as they have fantastic troops and lots of options. They really only have a serious deficiency with long range, low AP weapons. Fighting Israel’s Tau where I was faced with a wall of 2+ multi wound models I really felt the lack of punch.

Frankie ended up winning the event though, as he also went 3-0 with his Venom Spam DE/Eldar alliance and got more victory points throughout the tournament than I did. Well done, Frankie! Grant Theft got 3rd with his Eldar/Dark Eldar army, only losing to Frankie in round 3.

RTTs are a blast and I hope we can get more going again as I really enjoy those one day events! Thanks to everyone for hosting it.