Guest Tau Tactica by the French Overlord: No Allies Required for this Recipe.

You are here: Home › 40K › Tactics › Guest Tau Tactica by the French Overlord: No Allies Required for this Recipe. 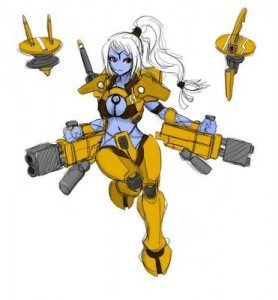 Guest Tau Tactica by the French Overlord: No Allies Required for this Recipe.
Commander A – Puretide Engram Chip, 2 Missile Pods, Target Lock, Velocity Tracker
Commander B – Iridium Battlesuit, 2 Missile Pods, Target Lock, Drone Controller, 2 Markerlight Drones
Riptide – TL SMS, Ion Accelerator
Riptide – TL SMS, Ion Accelerator, Early Warning Override
Riptide – TL SMS, Heavy Burst Cannon, Velocity Tracker, Counter-fire
10x Kroot, 1 Kroot Hound
10x Kroot, 1 Kroot Hound
10x Kroot, 1 Kroot Hound
10x Kroot, 1 Kroot Hound
8x Markerlight Drones
Broadside Team – 2 w/ High-Yield Missile Pod, TL SMS, Target Lock, 1 w/ Heavy Rail Rifle, TL SMS, Velocity Tracker
Hammerhead Tank – Ion Cannon, TL SMS, Sensor Spine, Disruption Pod, Blacksun Filter
Hammerhead Tank – Railgun, Submunition Shell, TL SMS, Sensor Spine, Disruption Pod, Longstrike
Total 1,850 Pts.
The Commander A is suppose to shack up with the Broadsides to give them Tank Hunter and add to their Firepower. The Unit can effectively Target 4 Targets, which of those 2 Targets include 2 Flyers. I find the unit Versatile and resilient unlike most people who have been taking broadside shoring them with Missile Drones and no LD boost.
The Commander B is the Markerlight Drone Squad Escort, not only does he make them a lot tougher but provides his BS5 to them. Almost ensuring 8-10 ML hits against 1 unit.
The Ion Riptides are purely to benefit from the 10 ML Drone Unit. With the combined BS and Ignore Cover ML they should be able to rip apart a unit a turn.
The Heavy Burst Cannon Riptide is an additional Skyfire resource as well as an effective Overwatch supporter to the other Riptides.
The 44 Scoring Models that can be kept in reserve and outflank offer highly mobile and adequate resilient scoring.
I like the Hammerheads as mobile platform that don’t depend too heavily on markerlights to put pressure where they need.
Upon Deployment, they will only be 17 Models but for the most Part all of them are 2+ Armor and AV13. That makes going second not such a liability.Thoughts and Comments?
The French Overlord is a very skilled player and this list has some new tricks I had not considered. What do you all think? -ed

12 Responses to “Guest Tau Tactica by the French Overlord: No Allies Required for this Recipe.”