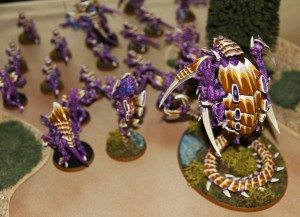 Bugs in the rear!

A guest tactica by Cameron.

Hello, it’s Cameron again. Following up on a comment/request that I received on my last tactica, I

decided to write this article on how to deal with fliers as a tyranid player.

I’ll preface this by saying that there really isn’t a “good” way to deal with flyers as a tyranid player.

Tyranid players have no equivalent of sabre defense platforms, contemptor mortis dreadnoughts, or

hydra support platforms. In order to deal with fliers, tyranids players have to make careful use of the

shooting attacks they have, position well, and design their lists with fliers in mind.

That said, here are my tips for dealing with fliers. Some of these may seem obvious, but they’re worth

6) Shoot them in the rear

Before you go around trying to kill fliers, it’s important to assess what sort of threat they represent.

What is the defensive profile of your army? What is the flier armed with?

night scythe, you probably don’t need to spend the effort to kill it. Similarly, a horde army won’t be too

much. Stormravens are hard to kill, but they also don’t always bring that many guns along.

What is the mission?

If you’re playing the relic, a vendetta full of veterans is probably not your biggest concern. They won’t

be able to steal an objective since everyone will be focusing on the relic, and a couple of lascannon shots

can be mitigated while the vendetta makes its pass.

This may also seem obvious, but fliers can’t kill models that aren’t on the board. If you’re having trouble

against fliers, you might consider switching to a list with a lot of units that arrive from reserve via deep

strike or mycetic spores. You can easily put these in places where the opponent’s fliers can’t shoot at

This may also seem obvious, but if you want to kill fliers, you will need to bring units with guns. If you’re

running an army that is all close combat, you won’t be able to kill any fliers… at least not any that are in

Tyranids don’t have great guns to shoot at fliers. You may look at something like a helldrake and think,

“Man… I need 6’s to hit, I have to roll armor penetration, and then it STILL gets an invulnerable save!!”

and get discouraged from shooting it at all.

Bring a bunch of guns, and go ahead and shoot it! Even if you just do a hull point or two, it can be very

scary for the owner of that heldrake and may affect where they position it.

Most fliers do not have weapons with large arcs of fire, and their shooting is limited by where they

are able to position themselves on the board. Against these fliers, the best strategy is to run straight

towards them. They will be forced to move at least 18” every turn, which will quickly put you out of their

arc of fire. They will then either need to zoom off the board, or go into hover mode and turn around. If

they zoom off the board, they will then need to re-enter off of your opponent’s board edge, which, if

you continue to run forward, will still keep you out of their arc of fire.

6) Shoot them in the rear

Tactic 5) does not really work against fliers that have vector dancer (like an imperial guard vulture), or

If you’ve determined that these fliers are a threat that you need to take out, you will need to get to their

rear armor. One way to do this is to run underneath them. Another way is to deep strike a shooty unit

(such as a pod full of devilgaunts or a dakkafex in a pod) directly behind the flier. This gives you an alpha

strike into their rear armor (which is great against vendettas, vultures, and helldrakes) and will probably

If you run an army with a high model count, one good tactic is to look at where the opponent will

want to move their flier during the next turn, and take up that space by spreading out a bunch of small

models. This will force the flier to zoom over you and potentially forego some of its shooting.

Don’t let your opponent safely go into hover mode, turn around, and come back at you for another pass.

any flier that goes into hover mode.

You can also take flyrants to combat fliers, however since I don’t personally run flyrants I don’t feel

qualified to talk about them. Perhaps someone else could offer insight?

Here are some tips for dealing with specific fliers:

The AV11 in the rear makes this flier hard to kill, since it is immune to devilgaunt fire. Fortunately it

doesn’t have that many guns (Tesla destructors don’t have high AP and don’t get too many shots), and

it can’t hover. The best way to deal with it is to hug your opponent’s board edge and force it to fly over

you, or take a horde army and fill up the entire board

AV11 also makes the Doom Scythe hard to kill. Its guns are more dangerous if you take high-value

monstrous creatures, or bring a lot of models with T4 or T5 that can be hit with instant death. The same

tactics apply as for the night scythe: hug the opponent’s board edge, or fill up the board

Get a cover save or cast feel no pain on your big bugs while the vendetta makes its initial pass. Once it is

on top of you, move or deep strike shooty units to get shots at its rear armor, and keep an assault threat

nearby so that the opponent will have to sacrifice it if it goes into hover mode.

A valkyrie probably won’t have enough guns on it to make it worth killing, just make sure that any squad

inside it doesn’t steal one of your objectives.

It’s going to be tough to kill it while it’s zooming, so run under it, absorb the fire, and keep an assault

threat nearby so that it can’t hover.

These are death for tyranids. Vector dancer makes this unit so maneuverable that it will probably never

need to leave zoom mode, and if it takes the punisher gatling cannon it will be a threat to almost any

tyranid list. You will HAVE to deep strike a shooty unit to get behind its rear armor, otherwise it will

circle-strafe you for the entire game and blow you off the board!

I know there are other fliers to deal with; these are the ones I’ve had to deal with myself. Feel free to

add any other tips in the comments section.