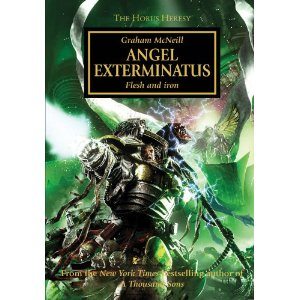 ‘Guilt upon the soul, like rust upon iron, both defiles and consumes it, gnawing and creeping into it, until at last it eats out the very heart and substance of the metal.  But if all the world hates you, and believes you wicked, while your own conscience absolves you from guilt, you will never be without friends.’ – Perturabo, Primarch of the IV Legion.

I would like to start this review saying that I like Graham McNeill’s writing. Like, a lot.  Well, at least where the Horus Heresy series is concerned.  He has written some of my favorite selections from the series, such as Fulgrim and A Thousand Sons, so when I heard that he was writing the newest Heresy novel Angel Exterminatus I almost creamed my pants in anticipation.  Then I heard he was focusing on the little known Iron Warriors Legion as well as revisiting the Emperors Children (in all their depravity) and I DID cream my pants.  Bodily fluids and ruined underpants aside, let’s get to the meat of this article, the review!

While the focus of Angel Exterminatus is Perturabo and the warriors of the 4th legion, the novel actually follows three different stories which revolve around the same plot.  The Iron Warriors are reeling from the events in the Shadows of Treachery heresy novella in which they are handed a crushing defeat by their sworn enemies, The Imperial Fists.   The primarch Perturabo’s mood is as unpredictable as it is violent.  Driven to Horus’ side of the rebellion due to bitterness and jealousy, the Iron Warriors are struggling to find their place in the civil war that has engulfed the galaxy, as well as the role they played in the slaughter of their brother legions at the Isstvan drop site massacre.  Enter the 3rd Legion, the Emperors Children.    Of all the rebellious legions, the Emperors Children along with their primarch Fulgrim have changed the most since the massacre.  A disturbing parody of their once beautiful and perfect appearance, the Emperors Children have devolved into the depraved and debauched warriors we are all familiar with today.  Even Perturabo and his Iron Warriors are puzzled and horrified by the changes that have taken place within the 3rd legion.  Fulgrim asks Perturabo to join his legion and undertake a quest to the heart of the Eye of Terror in order to find and utilize and ancient Eldar weapon that will sweep the armies of the loyalists from the face of the galaxy.  Perturabo, ever the general and tactician, is intrigued by the weapon and agrees to join Fulgrim and the Emperors Children.  All the while this is happening, a small ship crewed by survivors of the Isstvan V massacre are shadowing the traitor legions, plotting revenge for the loss of their legions.  We see the perspectives of warriors from the Iron Hands, whose primarch Ferrus Manus was killed by Fulgrim, as well as warriors from the Raven Guard and the Salamanders, the latter of which we have heard literally nothing about since the start of the Heresy series.  As the traitors delve deeper into the Eye of Terror, their distrust for each other grows and all out conflict between the Iron Warriors and Emperors Children seems to be inevitable.   Can Perturabo and Fulgrim work together to find the ancient wonder weapon, or will their past conflicts and growing disgust for each other be their undoing?

McNeill really hits the nail on the head with novel.  On one hand we have an in depth look at the Iron Warriors and for the first time really see into the psyche and background of the legion.  They stop being ‘Space Marines that are good at sieges’ and become a complex and even sympathetic group of warriors who feel abandoned and unappreciated by the more well known Ultramarines and Imperial Fists.  A lot of new characters and units are introduced and we see finally get a personal look at Perturabo, a very superhuman being with very human characteristics.  Of all the traitor legions, possibly baring the Thousand Sons, I most closely understand the reasoning behind Perturabo and the 4th legion’s decision to rebel against the Emperor of Mankind.  A cast of familiar characters from the Emperors Children also reappear, such as Lucius the (almost) Eternal (we really get a lot of background on this guy, as well as hints to how he ends up the way he does) and Fabius Bile (who somehow gets MORE depraved).  One of the best parts of this novel is the introduction of characters from the 10th legion, the Iron Hands, and the Salamanders, who have gotten NO love throughout the series.  Hopefully this means that there are Salamanders novels being published in the near future, since all of the other legions present on Isstvan V have been covered (the Iron Hands have several short novels throughout the Heresy series) and it is about time Vulcan and his coal skinned Salamanders get some love.

Overall, Angel Exterminatus is a great read, and a must have from Heresy Fans though there is a lot of storyline that is driven by events in previous novels.  A lot of new info about the legions present in the novel is revealed, as well as information regarding the two lost legions (you have to look REALLY carefully for this). I give Angel Exterminatus 5 creamed underwears out of 5 creamed underwears!

← Frankie and I are MIA for a Day or Two.
New Releases from Dreamforge Games →

One Response to “It’s Like, Literature, DUMMY! Guest Book Review by Raw Dogger”