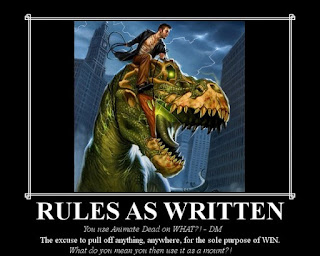 Seeing as how we’re currently working on a first draft for an Indie tournament FAQ, I have been thinking a lot about RAW vs. RAI.

Rules are not perfect things. We all know this from our experience with playing all these crazy games we enjoy so much. Why is it that it is so difficult to communicate clearly with rules?

Language. Language is an imprecise beastie. I can say to you: close your eyes and imagine a blue cat; and you all can do that. Now, what I just did was amazing if you think about. Using written symbols that represent sounds that your brain interprets as persons, places or things, I have just sent something from my mind to yours through space and time!!!!

Language really is an amazing tool and writing even more so. However, the problem comes from the fact that what I have in my mind as a blue cat may not be the same blue cat in your mind. We subconsciously bring into the equation of what is a blue cat (or anything) all of our life experiences and individual nuance. My blue cat may be lean, short haired and sleek like my first cat, Bucky (although she was black, not blue). Your blue cat may be super fluffy, fat and lazy. While we both just envisioned blue cats in a general sense, specifically we are thinking of two very different things. And while I could add descriptive words to narrow down what I mean by blue cat, it will never be a perfect transmission of information.

This is further exacerbated by the fact that the words we use have many different, sometimes contradictory, meanings and connotations. Words also change meaning over time and with use. It sometimes feels like we’re trying to build houses using slippery eels! 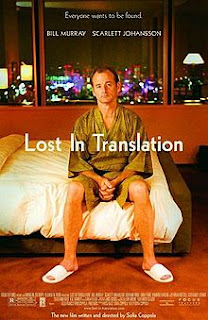 How many times have you read a rule, thought you understood it, played it a certain way only to have someone else tell you their interpretation of it–which is totally different form yours–reread said rule with what they said in mind and literally see it differently? Happens to me all the time. I read a rule, it quickly clicks in my mind as saying one thing and then I discuss it with someone else who reads it differently and all of a sudden I am less certain of my reading.

My point here being that we will never have a rule system that perfectly communicates the intent of their writer (although GW, contract a technical writer and that will help immensely!). Just as with law, we need lawyers and judges to interpret their meanings and how they apply to every unique situation. So too do we need to agree as gamers how to read our rules. Weird situations pop up in games as no system can predict the multitude of unique configurations of terrain, model position, gamers, etc. that add up to any individual rules conflict. TO’s exist for a reason!

So, when deciding HOW to interpret said rules we have two distinct approaches. We have the approach of reading what is written on the page and working only with that otherwise known as the Rules As Written approach, or RAW.

We have a second approach, using what the reader believes is the intent of the rule. This is usually done using context, precedent and logic. This approach is known as Rules As Intended, or RAI.

Both approaches have good and bad sides. RAW has the benefit of using ONLY what is on the page, and not injecting any reader bias into the interpretation of the rules. The fear of many who prefer RAW over RAI is that RAI opens the door to personal agendas in influencing the rules (whether intentional or not). RAW also has the benefit of being very defensible. However, RAW can often give us bizarre and illogical rules that render certain in-game objects or effects useless.

RAI on the other hand, uses what most people would call “common sense” to avoid the above mentioned situations. The issue with RAI is that determining what the intent of a rule is is going fishing in muddy water in a big way. We can’t know what a writer intended at the time he or she wrote something. Plus, for all of the reasons listed at the beginning of this article, two people can see the same thing and determine two totally different intents from it, and both be convinced they are correct (just go to any rules debate thread and my point is illustrated). 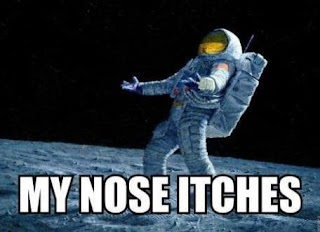 As we now sit in the unenviable situation of writing a tournament FAQ (unenviable because no matter how hard you try to equitable in your rules judgements  you will always piss people off), we are faced with the question of RAW vs. RAI.

I tend to be very logical in my thinking, and like things to be clear cut. Thus, I tend towards RAW on a personal level. However, as a TO I know that pure RAW not only upsets people (most folks play RAI rules interpretations without even thinking about it) but the crazy situations it can produce can create more problems than it solves.

Thankfully, GW has been pumping out FAQs lately, and watching what they have been doing the trend is towards RAI. And when I say that, I don’t mean what I think they intended but that they have not been strictly going with what is written on the page which indicates that they are trying to clarify intent. Bravo, GW, that helps us out a lot and sets precedent.

So, we here at Frontline have decided on a RAI/RAW hybrid approach using input from various TOs (thanks to all of you for offering to help!) to help adjudicate sticky rules questions. Where RAI isn’t fairly clear to us, we will fall back on RAW. I feel that this will be the best formula to facilitate the smooth running of an event and avoid accusations of bias as much as possible. It sure isn’t perfect, but with stated intent and an observable order of operations, it should certainly help!

What are your all feelings on sussing out rules disputes?

← Guest Editorial by Edwin: A Balancing Act and Why I Fail at It.
Nids Double Header vs Chaos and Marines + IG 1750 BAO Match →