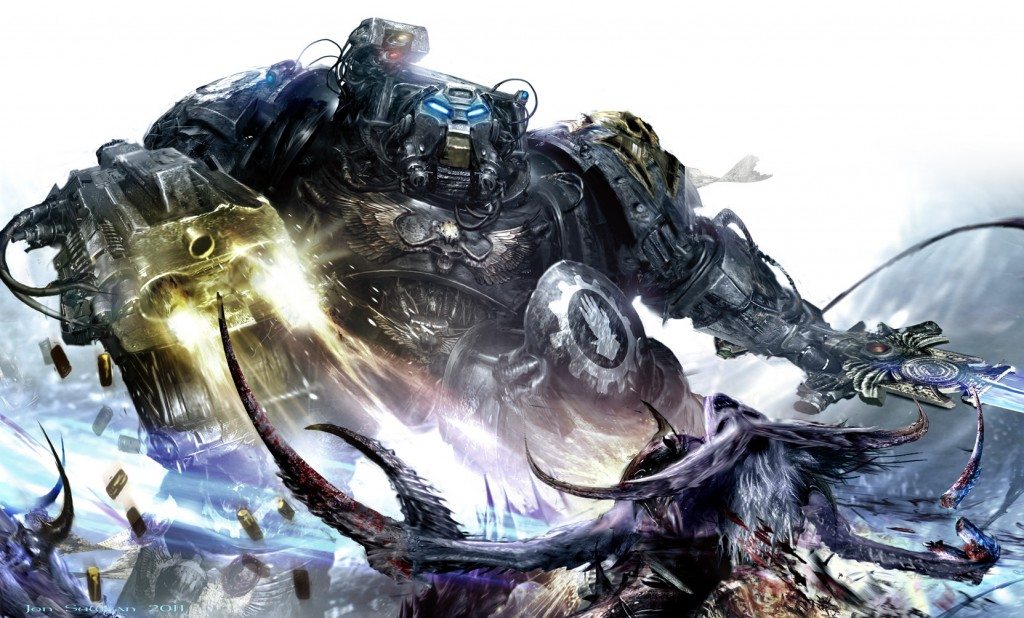 Wrath of Iron by Chris Wraight

‘Wrath of Iron’ by Chris Wraight is the second book in the Space Marine Battles Novel series that I have read, the first being ‘Hellsreach’ by Aaron Dempski-Bowden.   ADB being my favorite Black Library author, Mr. Wraight had some big shoes to fill.  Luckily for me, ‘Wrath of Iron’ has not only been one of the most enjoyable reads I have had in quite some time but a detailed look into the psyche of one of the least written about Space Marine chapters, the Iron Hands.  Full of pulse quickening action and well written, thought out dialogue Wrath of Iron fulfilled everything and more that I expect from a story that focuses on 8 foot tall robotic demi-gods.  I have read more Black Library books than I would like to admit, and one of my biggest peeves with their portrayal of Space Marines has always been the act of trying to humanize them.  Names will not be named but I recently read a certain omni-bus regarding a very famous chapter of Space Marines where the characters sat around and used language you would expect from a high school locker room.   I’m sorry but genetically modified super humans with little to no concept of human emotion or feelings should not be using contractions and slang.  Leave that kind of language for Guard novels.  Well, enough about my personal likes and dislikes in 40k prose.  On to the summary! (NO SPOILERS)

When the time comes, I will strip my hands of their unnatural silver.  I will instruct my Legion to recant their distrust of the flesh.  I will turn them away from the gifts of the machine and bid them relearn the mysteries of flesh, bone and blood. – The Neimerel Scrolls Attributed to the Primarch Ferrus Manus.

In ‘Wrath of Iron’, rebellion has erupted throughout the poisoned hive planet Shardenus Prime.  The Iron Hand’s Clan Raukaan has been tasked with finding the cause of the rebellion and crushing it.  Clan Commander Rauth leads the Clan with ruthless and machine-like efficiency, something that the mortal commander of the Imperial Guard taskforce Lord General Raji Nethata finds impossible to comprehend.  Rauth is supported by Chief Librarian Telach and Iron Father Khatir, who know the salvation of the planet will need both the strength of the Iron Warriors’ spirit, as well as ethereal power of the warp.  When the truth of the uprising is unearthed, Rauth must use all of the tools at his disposal to utterly destroy it, even if those tools happen to be thousands of Imperial Guardsmen or even the mighty titans of the Adeptus Mechanicus!

Chris Wraight does a fantastic job of showing the tense relationship that the Imperial Guard shares with the Space Marines.  I especially like the internal torment that Lord General Nethata goes through as he attempts to work with a force that is not only autonomous but will requisition entire armies to fulfill a mission that is only known to them.  The fragility of humanity is shown in stark contrast to the massively powerful and neigh immortal Space Marines.  This has been done numerous times, but Wraight makes it a point to show the raw emotions felt by average humans when confronted by the Space Marines, which more often than not terrify them as much as the enemy.  The Iron Hands inner workings are examined in great detail throughout the novel, which was a big selling point for me.  All I knew about this secretive chapter was that their Primarch Ferrus Manus was killed by his brother Fulgrim and that they worked closely with the Adeptus Mechanicus.  Their relationship with the Adeptus Mechanicus is also explored in detail and there are some really interesting revelations made on this front.  Wraight goes into exacting detail when describing the philosophy of the Iron Hands and why they feel the way they do about living flesh.  The battle tactics and fighting style of the Clans are also detailed throughout the novel.  One of my favorite characters is the Iron Father, Khatir, who more or less functions as the Clan’s Chaplain and is given, in my opinion, some of the best dialogue in the novel.  Though he is a minor character, his speech to the terrified and exhausted guardsmen towards the end of the novel definitely has stuck with me.  Chris Wraight is truly a master of dialogue and be it Space Marines, Titan Princeps, or Imperial assassins every word spoken (written) holds true weight and their tones are true to their characters.

So why should you go out and pay $12.99 for this novel? If you like detailed Imperial Guard tactics, crisp and insightful dialogue, background into an extremely interesting Space Marine Chapter and gratuitous blood and violence (without being ONLY about that) than this is the novel for you.  If you want Space Marines speaking like teenagers and lasguns punching through tactical dreadnaught armor, go pick up something else.

Nice job Mr. Raw dogger in reviewing this book. I enjoyed Chris Wright’s Space Wolves battle book, “Battle of the Fang” and it also had the elements you mention and a compelling storyline. I do like the way he humanized the Space Wolves though because most of the time the Vlka Fenryka is characterized as cold blooded killers, which they are, but they are also a very proud chapter that has little Imperial support.

The Iron Hands sound like a very efficient force, and one that the reader could later play in a game if 40K and remain true to the fluff, err… I mean lore!

I am looking forward to reading this one, too! I have always really liked the Iron Hands, and I think that this will be a fun read.

Dude. Thank you so much for doing this. I hope book reviews become a regular part of this blog. I have experienced such polarity in author skill for 40K novels I am almost too afraid to read anything that is not Dan Abnett(sp?) or Grahm Mcneil (ok, I can’t spell names). Although I DO like that one guy who did the Nightlords series!! Probably my favorite 40k novel yet. Props to Reece for the recommendation on that one.

ADB= Aron Demski Bowden, author of the Night Lords books, easily the best write they have, IMO. He is the man!