Duel Con Results and Thoughts on the Current Meta

You are here: Home › 40K › Tournament report › Duel Con Results and Thoughts on the Current Meta 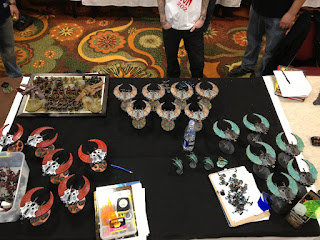 Hey everyone, Reecius here to

discuss the current meta and what we learned from the Duelcon 40K GT.

Duel Con was the past weekend, and Frankie and I ran the 40K

GT and Team Tournament. We used our standard BAO format, the same as at

Comikaze. It is a combination of 3 book missions played simultaneously with all

system that has proven to be easy to learn, flexible, and popular. Results and

pictures of the event can be found here.

Unlike Comikaze, we did not have as diverse of a field at

Duel Con. We had a large amount of Cron Air armies this go around, definitely

the most represented list at the event. Cron Air has a really big advantage

Flyers that are each an individual unit. Interestingly, few folks took

Sabres, Hyperios defense platforms, etc. and that would have certainly put the kybosh

on a Cron Air list. A Quad Gun and a few flyers would serve nearly as well.

Amusingly though, our pairing software paired almost all of

the Cron Air lists against each other! Haha, apparently the pairing gods have a

sense of humor! (And we have no control over pairings, just to be explicit). And

for those of you thinking Chaos will provide some respite from Flyer Nation,

from what we’ve read…not really. We could be wrong of course, but everything we’ve

to be much better vs. Infantry) and Flakk missiles, at least as they are

defined in the BRB, only have Skyfire, not Interceptor. So, Flyers will come on

and look to destroy them first before they fire. 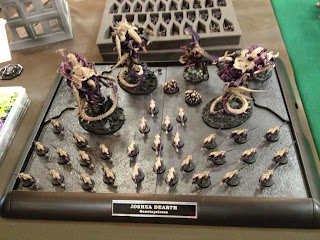 We did have a few surprise wins over the flyer lists though.

Tervigons. Board control and twin-linked rate of fire are excellent tools when facing

an Air Force. Also, Flying Monstrous creatures can be quite good as well. We

marbles in the finals. He had defeated Shane Irons’ Cron Air army the round

prior. With a beneficial Warlord trait (-1 to reserve rolls) and first turn

Night Fighting, Brian was able to play to objectives and win the game. In the

finals against Allen Campbell’s Cron Air/Horde Ork list, he put up a great

fight but lost a tight game (6-5) to Allen who took it all! I found it very

kicking butt. At Comikaze we had several Dark Eldar players doing great, and

here we had another stand-out DE list. It would appear so far, that they have

made the transition to 6th very well.

powerful combos, and one that we’ve seen doing well in other events. Fuegan17,

a member of our team, won the local Feast of Blades qualifier with an Ork/Cron

support units in Lootas, Dakkajets, etc. while the Crons provide the killing

power. I think this is a combo we’ll be seeing a lot of.

As for Forgeworld representation at Duel Con, it was light.

We had a Hades Breaching Drill, a Vulture with Punisher Cannons (AWESOME model!),

Storm Eagle, and an Ork Gun Wagon. Nothing was overpowering at all. I’m not

saying there isn’t room for some abuses there, but people bring what they have

painted to tournaments, and this was no different. Once again, FW’s impact on

the event was underwhelming. Had I not asked people what they thought about it

being there, most folks wouldn’t have even noticed. 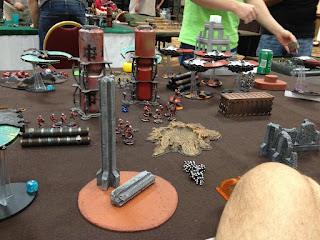 It was a very fun event, and I am really enjoying watching

the 6th ed meta unroll. It is such a more complex and multi-faceted

game now, I love it! I hope we see folks get away from the rinse and repeat

variety 6th allows. The great thing is that now not only can you

build a truly unique army, but it can be effective on the table top as well!

Thanks to everyone that came, we had some first time

What do you all think about the 6th ed meta so far?

← Frontline Gaming: Change Ahead!
Brawl in the Fall →