40K Tyranids: A List I’ve Been Having Success With. 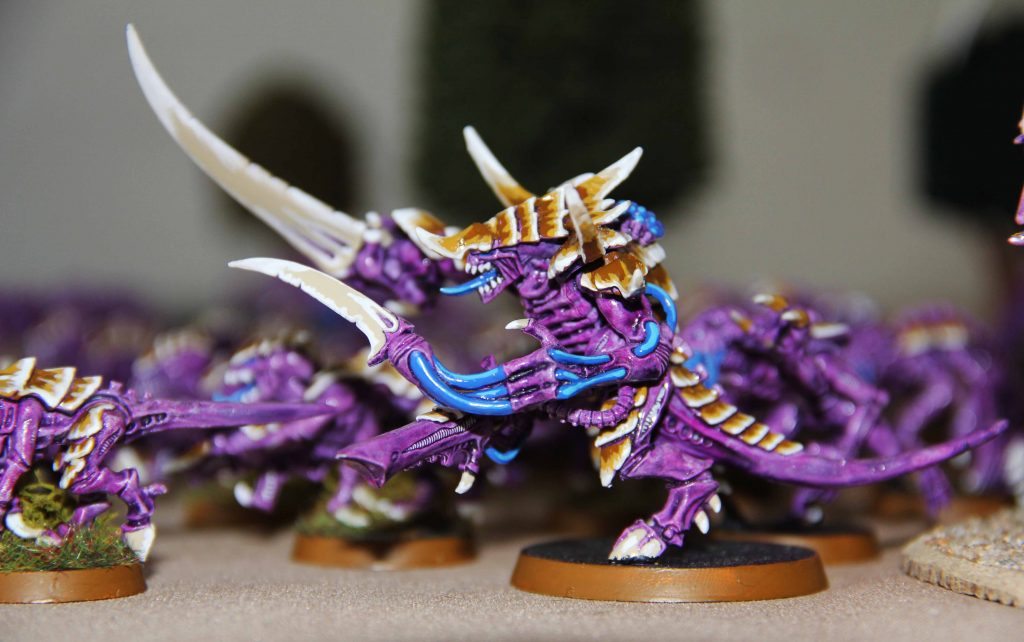 Purple is the new black!

I know quite a few of you have been interested in reading more about the bugs, so here’s a list I’ve been enjoying!

The bugs got a BIG boost in 6th ed. So far, we’ve been finding them to be more than a match for any other list out there besides certain Dark Eldar and Grey Knight builds.

Why have Nids gotten such a boost? The changes to fearless and the movement to primarily objective based games heavily benefit the bugs. The changes to assault hurt, but most Nid assault units have fleet which really mitigates that.

For one, you have a number of very useful tools. Swarmlord first and foremost is 100% Boss Mode. He is now what he should have always been. With the new Bimancy powers and a little luck, he can become an engine of destruction. If you roll up Iron Arm (and you have a 4/6 chance as he has 4 powers) he and his Guard can become tough 9! Yikes! Most things in the game can’t even hurt you at that point. Couple that with FnP and It Will Not Die from Endurance, and the bonus initiative and attacks from Warp Speed, you can get crazy powerful.

With his attacks forcing the opponent to reroll successful invul saves, causing instant death, and ignoring armor he can walk through many death-star units on his own. He is also a force multiplier, giving chosen units preferred enemy, furious charge, etc. He is a fantastic addition to your army. Just be wary of the fact that he is a tad slow, and not cheap.

The Tervigons went uber in 6th. The fact that they are scoring monstrous creatures that can also give chosen units FnP is pretty incredible. Pooping out fearless scoring units all over the place though, is where they really shine. As only 1/6 missions is KP now, these aren’t nearly the liability they could be in previous editions. The Gants have a massive reach and are fantastic for pinning down scary units as well as taking objectives. A nice trick is to assault a powerful unit with 2 units of Gants. 1 engages as many models from the enemy unit as possible, and the second unit engages as few enemy models as possible, preferably 1. That way, if the first unit is destroyed, the second unit is sure to hold the enemy in place for at least a turn. With poison and Furious Charge, these guys can actually do a lot of damage to living targets. Couple this with preferred enemy from Swarmy and they can actually pack a wallop. If needs be, you can take Biomancy powers to buff them further, too.

A secondary benefit for the Gants and Tervigons is board control. The sheer number of bodies you can put on the board is a weapon in and of itself. Units such as Flyers can really be mitigated this way. By covering up the board, flyers will have nowhere to land and as such must either overshoot them or be destroyed. Using Objuration Mechanicum also helps a ton to take flyers down, although more frequently you will be using the stock Tyranid powers as FnP is extremely useful. 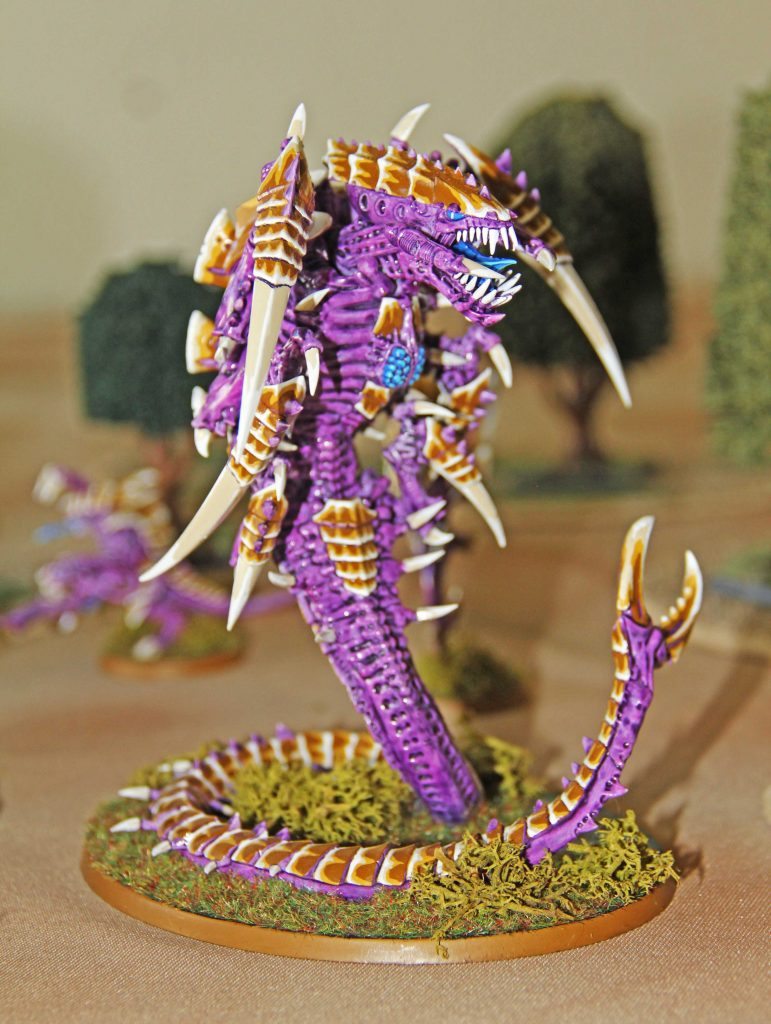 The Trygon Prime was useful before, but now with the changes in the last FAQ, he got ever better! He is now a Character, which means he can issue and receive challenges. This can be awesome when used correctly. He can go into a scary unit and survive for a turn by challenging the sarge. There are few models he has to fear one on one, and as such, he should survive for the turn. Often though, the Trygon will go through an Infantry unit like a lawn mower. He is also great for taking vehicles apart, and with Deep Strike and Hive Commander from Swarmy, he is pretty dang mobile. His Synapse is great for keeping the little gribblies under control and for mitigating enemy Psykers. Fleet is what really earns his place in my list as he will reliably make his charges.

The Hive Guard do what they do. They’re an amazing shooting unit and need little introduction. I’d take another unit if there wasn’t so much dang competition in the elites slot! Suffice it to say, you can’t have too many of these guys.

The Ymgarl are game winners. Now that they are one of the only units to still be able to assault out of reserves, they are comparatively even better than they were. I can’t recomend them enough. I never play without Ymgarls. Seldom is the game where they do not have a major impact for me. With a 4+ save, the ability to alter their stats, and hard hitting power, they make great backfield hunters. Long Fangs, Lootas, Havocs, etc. all fear Ymgarls. They’re great for taking down vehicles, too! Definitely a top notch unit.

The Venomthrope is there to provide support to the Big Boys. The benefits of the spore cloud are really useful, particularly when considering the increase in Flyers and Barrage weapons we’ll be seeing. While I hate giving up an Elites slot for him, he adds enough to the list to be worth it, IMO. 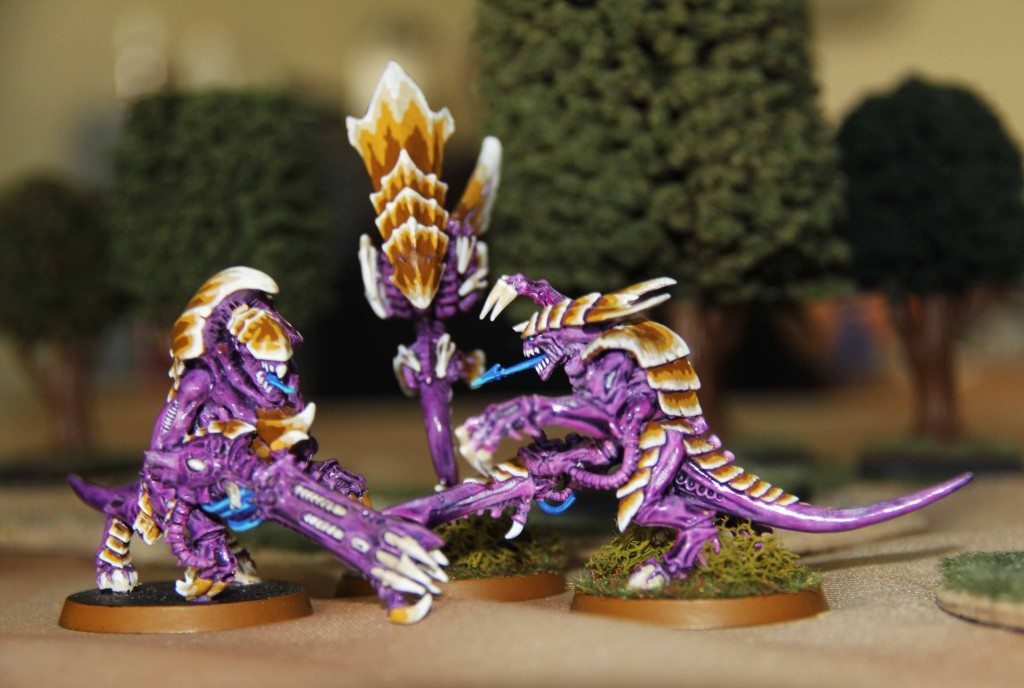 Lastly the Hormagants. I am still deciding if I like the Hormagants or if I’d rather have another Tervigon. So far I am liking the Hormagants for a number of reasons. For one, they are guaranteed to be a 28 strong unit. I don’t need to worry about the Tervigon crapping out turn 1. The Hormagants are also quite good in combat against living units. With Fleet, Poison, rerolls of 1’s and 2 attacks base, they hit quite hard. Given Furious Charge from Swarmy, they can tear through an enemy infantry unit and most likely get rerolls to wound (against tough 4 enemy units). Plus, they’re another scoring unit, and an aggressive one. They’re greta for heading up field and engaging the enemy, trying to take their objectives from them.

The cool thing is that that is just the tip of the iceberg. There are a ton of other units and combos in the book that are viable. What are some of the successes you all have had with Nids?

25 Responses to “40K Tyranids: A List I’ve Been Having Success With.”