40K: We’re Offering 25% off Pre-Orders for the Starter Set and Further Info on its Contents! 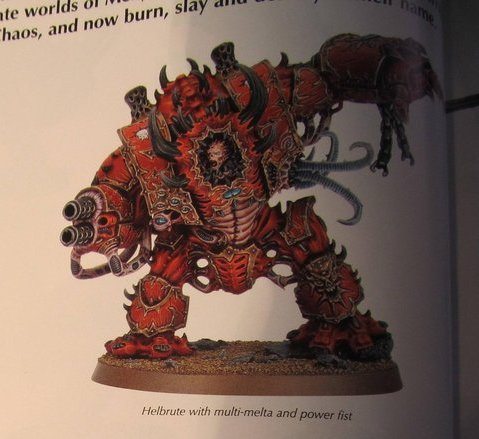 Hey everyone, as with all pre-orders, so long as you order and pay before the release date (looks to be the 1st of September) we will give 25% off! That’s right, order early and you’ll save some serious loot on this AWESOME looking set! We accept Credit Card, Cash, PayPal and gold bullion! We don’t have pricing yet, but as soon as we do, we’ll let you all know!

This comes to us via Faeit212 (he’s been knocking it out with the rumors lately!)

There is one question that has been in the comment sections of every post yesterday, and that is “What about the rest of September, is the Chaos Marine codex still rumored to be coming out?”

Well to answer that, I did discuss this directly with a couple different sources, and received some replies. So while trying to create a little suspense this morning without caffeine can be a little dangerous, you will have to read below to see what the answers were.

I think by now most of everyone is drooling over the starter set models. If you are not, that is OK, I’m sure there is some medical reason and you have a Doctor’s note to explain it.

First off, the picture above is said to be the last page of the September White Dwarf. So there is nothing really there to say “Chaos Space Marines Codex”. Although the Battle Rages On! could mean a big release still right ahead of us

A couple days ago we had a rumor from via Ravengardt here on Faeit 212. There was some a typo saying 08.08 for a chaos space marine codex release. The day he meant was September 8th. (see how I avoided all the we say dates this way stuff). So to make it short he did contact me and is his response.

announcement. I asked him when he told me about the 8th, because I

thought it’s too close the starter box and he replied 8th is release.

one week before release. Or he got something wrong.

Now lets get down to some red meat (sorry vegetarians, I like that phrase and red meat), I did ask one of our more regular sources to see where the codex release still stands. This is mostly because I do not want to bring forth this unbridled excitement and have any let downs. Right now the hype is so high with the starter set, I can feel it from the masses around the world.

The same source last Sunday declared the following and has said in the past that as it stands CSM and Dark Angels are planned releases before years end.

The 25th is the white dwarf which is all about the new starter and chaos space marines.

Pre-Orders for the new starter set begin on the 25th, for release on the 1st.

I find this source very credible, here is the response.

Unfortunately, the October white dwarf articles are all about chaos, so it looks like we’ll see them next month, unfortunately.

It wouldn’t be uncommon though to release articles about the product after it’s released though, we’ve see a lot of “follow up” stuff happen in the past.

So does this mean that we are going to see a stealth release? Or is October when its expected? Personally I still think we are looking at September 8th for pre-orders, because I know whats under those blacked out sections and because Ravengardt gives similar dates. However I am not a rumor source, so I can only go on what I am given or find.

That basically means, I am working with the information that I have, but this one is very tightly under wraps. I think I have the right combination to this safe, but do I have the right safe?

Sorry for detailing it out the way did, but I felt it important to not just drop the information I have without going into some of these details. If I get more on this…. I will get it out to the readers here.

This video from GW indicates we’ll have the Starter Set officially up for pre-order near the end of the month!

This comes to us via Faeit212

The question of this new model from the starter set is finally answered. Its a walker with options for a butcher-cannon or twin reaper auto cannons….. wow. Thats a lot of firepower. Lets take a closer look!

The source for this sent in a correction on the stats. Basically oops sorry it is 12/12/10. I have corrected it below.

via Faeit 212 (a Must Remain Anonymous Source)

There’s a rumor floating around that the hellbrute strikes at initiative 1.

I just want to clarify that while it is listed as having a Power Fist and not a Dreadnought Close Combat Weapon, because it is a Walker it does not suffer from the Unwieldy special rule, that’s why it’s simplified in the codex entry.

can swap the Multi-Melta for a butcher-cannon, or twin reaper auto cannons (which is pretty cool, since that’s an entire riflemen in one arm, but with less range), twin-linked lascannon or a twin-linked heavy flamer.

can swap combi-bolter for a meltagun or heavy flamer

Mark of Nurgle: 5+ restore a hull point OR repair immobilized / weapon destroyed at the start of a turn.  Does not let it get back up after having been killed unlike Unholy Vigor.

Mark of Tzeench: flame weapons (if it has any) are +1 strength and -1 AP (heavy flamers are AP3… whaaaat)

Now we have the fluff and background of this new unit. I have taken the background, the information from earlier, and the latest additional bits and put them all in one location. So have fun…. Your going to enjoy this one.

via Faeit 212 (a Must Remain Anonymous Source)

They were mighty and honorable warriors interred in the powerful and venerable dreadnought chasis during their former slavery to the Imperium.  A side effect of insanity was a known feature of Dreadnoughts.  To counter this, standard operating procedures on Dreadnoughts is to keep them in stasis between service, so that they see life as one constant battle, only awake in times of great need and focus, but Hell brutes get no such reprieve.

Without the cold embrace of nothingness that makes the years and decades between war pass in the blink of an eye, they are driven mad. The rage of a mind essentially trapped within his walking sarcophagus, simultaneously his freedom and prison tears at the very fabric of his sanity and it is expressed through monstrous transformation and mutation.

Some believe that when enough service has been rendered and enough blood has been shed and victories won in the name of the Dark Gods, these once mighty warriors will be elevated to Greater Daemons and once again walk the earth of dead worlds with their own two feet.

I just want to clarify that while it is listed as having a Power Fist and not a Dreadnought Close Combat Weapon, because it is a Walker it does not suffer from the Unwieldy special rule, that’s why it’s simplified in the codex entry.

can swap the Multi-Melta for a butcher-cannon, or twin reaper auto cannons (which is pretty cool, since that’s an entire riflemen in one arm, but with less range), twin-linked lascannon or a twin-linked heavy flamer.

can swap combi-bolter for a meltagun or heavy flamer

Mark of Nurgle: 5+ restore a hull point OR repair immobilized / weapon destroyed at the start of a turn.  Does not let it get back up after having been killed unlike Unholy Vigor.

Mark of Tzeench: flame weapons (if it has any) are +1 strength and -1 AP (heavy flamers are AP3… whaaaat)

Some stuff I left out (it was late, I was tired)

You can change the shooty arm for a Power Fist.  The power fist doesn’t have an inbuilt weapon though so you can’t get another flamer or meltagun on it.  This upgrade is free.

The autocannon is low points cost, the butcher cannon is moderate, the lascannon is expensive and the twin-flamer is free.

If you get fire frenzy, you double shot at the closest enemy target, not closest target.  Only if there are no enemies in range do you shoot a friendly target (twice).  If nothing is STILL in range, you treat it as blood rage instead. (so upgrade your stuff to flamers and give it another power fist if you always want it ANGRY)

Blood Rage makes the Hellbrute have to move towards the closest target.  Rolls 2d6 to run (pick the highest) and can charge, and must charge, the closest target within 12″. (rolled as normal).  If immobilized, you treat as a Fire Frenzy.

Dark Apostles make Blood Rage results more likely to happen if they are nearby (but you risk the albeit now unlikely fire frenzy to the face).

They’re not infected with the same virus as Obliterators.

It’s not a daemon, and does not have the daemon USR

The fluff entry also mentions that some Hell Brutes are not as mutated as others, and more closely resemble their dreadnought kin, but to make no mistake they are just as insane.

(So you can still use your old models if you have them.  The hellbrute is just the evolution of the whole “style” for the new CSM, which is a lot less “space marine with spikes” and a lot more something unique).

← Signals from the Frontline Will be Late Today
For Sale: Forgeworld Chaos Khorne Army →

10 Responses to “40K: We’re Offering 25% off Pre-Orders for the Starter Set and Further Info on its Contents!”