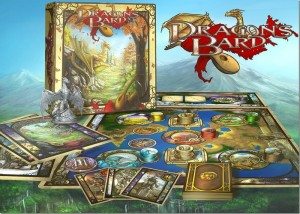 Anything from the Hickmans will at the very least get me to take a look. They are the creators of one of my all time favorite Fantasy series: The Dragonlance Chronicles.

Albino Dragon Launches The Dragon’s Bard Board Game On

of Dragon’s Bard, The Board Game on Kickstarter. The board game is a collaborative

project based on Dragon’s Bard, the fantasy book series from international bestselling

is the publishing company bringing the game to market.

Using the crowdfunding site Kickstarter, Albino Dragon has launched Dragon’s Bard as a

support the project in the early stages of development.

Shane Tyree, artist in residence for Albino Dragon, created the stunning artwork and

imagery that brings Tracy & Laura’s world of dragon’s to life within the game. Designed as

a family game for 3-6 players, the game incorporates a smooth flowing use of mechanics

that allow for constant involvement for all players.

Hickman, co-author of Dragon’s Bard. “To see our stories brought so vividly to life through

his design and Shane Tyree’s inspired art is a fantasy come true for us.”

Dragon’s Bard is the third game from Albino Dragon, an Austin-based game company

founded in 2012 by Richard Bliss and Erik Dahlman. The previous two titles were

Genegrafter and Ace of Spies; both funded through Kickstarter and produced by Albino

“We are thrilled to bring together Tracy, Laura, and Richard to produce a game of such

Bard series will be just as enthralled with the game experience as they are with the books.”

Founded in 2012 by Richard Bliss and Erik Dahlman, Albino Dragon, LLC is a premier

publisher of tabletop board games that focus on both domestic and international markets.

Richard and Erik both are veterans of the Silicon Valley software industry. Richard has

a wide range of US and International software companies. Erik Dahlman has been a

software developer and serial entrepreneur for more than a decade. Together they bring a

wide range of skills and experience to Albino Dragon.

over a quarter of a century.

than 50 game titles. His awards include:

2010 – Inducted to the Charles Roberts Awards Hall of Fame