We were sent some counters by Genius Factory Games and here’s our review of them.

These are laser cut acrylic counters that have some really cool features for miniatures gaming. While they aren’t meant for any paritcular system due to copyright law, I found a lot of use for them in my games of 40K. 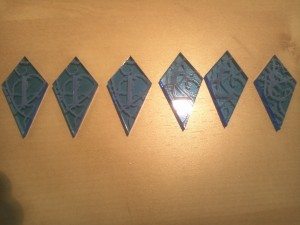 The Pain Tokens are great for Dark Eldar armies. They help to track of how many Pain Tokens a unit has accumulated throughout a game. The nice thing about them is that in a set of 6, there are three 1’s. two 2’s, and a single 3 which I find to be a good spread as you are less likely to need those 3 token markers. This also means you get more mileage out of each set as instead of needing 3 markers for every unit, one set can cover quite a few units with differing numbers of pain tokens. In fact, a single set of these is probably all you will need for a typical Dark Eldar army. My only complaint is that the 3 Pain Token Marker was printed backwards. It’s still totally usable, just flip it around, but it was a minor error that might bug some folks. 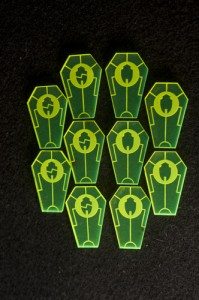 The Shield Counters are awesome for Necron armies to show which vehicles have their Quantum Shields up and which have lost them. Counters like this really help to keep bookkeeping in a game to a minimum. Visually, they look cool, too. 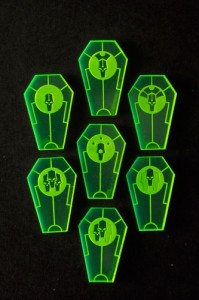 Another sweet counter set that we got our hands on, the Character Counters allow you to easily track the location of, and wound status of your Necron Characters. This are nice because they are flat, look cool, and again, help to keep bookkeeping and the location of your downed Crons accurate. I really like the visual aesthetic of the wound markers as well, showing how many wounds the 3 wound models have remaining.

On the whole, I would say that these counters are an excellent value for the price. Most of them are around $6-$8, and give you enough counters in a single pack to track all of your wounds/pain tokens/shields for an entire army. They look cool, and the fact that you don’t need more than a single counter per model is nice as it saves space and prevents you from losing small, fiddly bits.

I would recommend these counters to anyone playing these armies. Also, check out there range of products, they have some additional counters that are also really useful!