You are here: Home › Board Games › Editorial › Guest Editorial: Card Games you Should Play

A guest article by Sean Ireland.

While miniatures are my favorite type of gaming, if I can’t get my gaming fix with toy soldiers I look to other methods.   I wrote before about how board games are a favorite alternative of mine, though they are not sole available surrogate choice.   Card Games can fill a great niche of providing a gaming experience when you can’t (or don’t feel like) breaking out the miniatures.  As a note of clarification, when I mention card games I am not referring to the collectable variety, I am referring to single boxed (in their core form) card games. One of my favorite things about this genre is the games are usually under $20 and don’t take very long to play.  In the world of gaming, card games are the street food of games. Just as when I wrote about board games, the games I am suggesting are staples in a gamer’s closet.  These are the hamburgers of the card gaming market, you won’t find any truffles here. 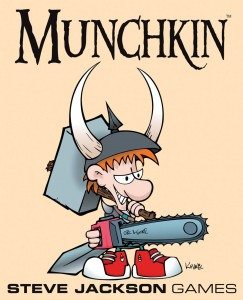 Munchkin is a pure classic in this category, any gamer who has spent any time rolling multi sided dice and eating Cheetos will appreciate this game.    Steve Jackson Games created a game that took an adventure crawl RPG experience and boiled it down to its essence and then splashed a very large heap of humor on top.  The game doesn’t take itself too seriously, and this makes it endearing to any player.  I won’t go too much into the details of the game play, if you are curious, the Will Wheaton hosted web show Tabletop did some great coverage of the game.  If a dungeon crawl isn’t your cup of tea, the game comes in many other varieties, including a Sci-Fi themed game, a Kung Fu themed game, and my favorite, Cthulu Munchkin. A nice side benefit of this game is it can capture the attention of a wide range of ages, especially the young.  My eleven year old and his friends enjoy this game just as much as I do. 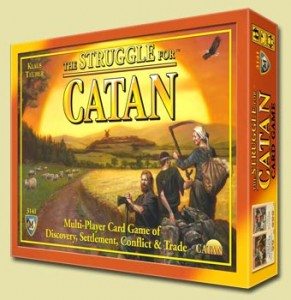 I previously wrote about how Settlers of Catan was a great board game, and the card game version is no different.   The designers took the same basic theme, competing for resources on an island to build the largest settlement, and made it work in a card game version.  I like this version even more than the original.  The card game moves quickly, and still feels like it has just as much strategy as the full version.   The game scales well, depending on how many people are playing.   If you enjoy games where you are not in direct competition, this could be a great choice for you.  There is still a clear winner, though this game is not about bashing your opponents face in. 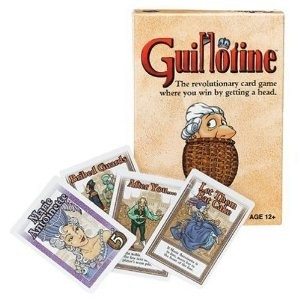 Guillotine is the game on the list that I pull out when playing with the muggles.  In this game you play an executioner in the time of the French Revolution who is competing with other executioners for who can bag the most important nobles.  Even though it sounds grim, this game has a comic feel to it, while not to the extreme silliness of Munchkin, takes some of what could be an icky topic for a family game.   The game is very simple to explain, and I’ve found if I am going somewhere with family or friends who don’t regularly play games it’s always a hit.  The only negative to this game is it can be a bit hard to find, as it went out of print for a few years, though when I looked it appears to be back in print, though that could change.  This is one of the few games to have lasted over ten years in my gaming closet. 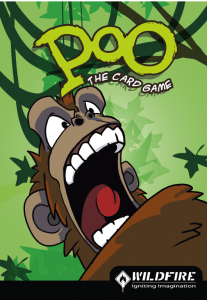 Along with such guilty pleasures as Tango & Cash, riding a moped, and milk flavored soda I am almost embarrassed to include this game in this list.  I did say almost, didn’t I?  Poo is a game where each player is a monkey trapped in a cage, trying to fling poo at other monkeys/players.   It’s about as dumb as it sounds, though for inexplicable reasons, most likely due to a great game design, Poo is just fun.   For some gamers the subject matter is so crass it can overshadow what are simple, yet very well written, and fun mechanics.    Each player draws cards that allow for poo flinging, wiping poo off or redirecting poo attacks.  The timing and use of these cards can lead to some surprisingly enjoyable game play.  If one can get past the squeamish nature of the content this game leads to some of the most fun I’ve had sitting around a table lately.

Most of these games are great palate cleansers, and are easily tossed in a back pack.  In between rounds at a tournament or at a convention when waiting for an event these types of games can easily help pass the time.  Board Game Geek reviews card games like these, just like they do board games.  I’ll repeat what I said about my suggestions about board games, every gamer is different, go out there and find some games that work for you if none of these sound appealing.

Posted on July 26, 2012 by Reecius in Board Games, Editorial

4 Responses to “Guest Editorial: Card Games you Should Play”