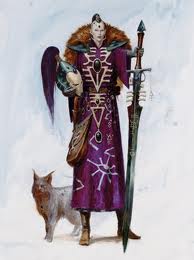 This comes to us thanks to Kirby over at 3++

We thought Eldar were this year. If not them, at least Tau. We’re seeing nothing of them coming out anytime this year, we’ll be lucky to get Dark Angels this year as well with the Hobbit coming in December. We know Chaos is coming in just over a month so unless Dark Angels are squeezed in before December, we’ll see them early 2013. The question is – what’s next? Tau & Eldar have been rolling around the rumor mill for well over a year and it’s time to, unusually, add to that.

I’ve been told there are some boxes in warehouses, the pre-packaged kind with the pretty pictures on the front. This doesn’t mean Eldar are after Dark Angels, Games Workshop sat on Dark Eldar for years despite the models being done and reportedly, Sisters of Battle are in the same boat currently. Hopefully Eldar won’t go this route as well… but this could slate them for release roughly a year from now though it could be much longer. Here’s what I’m told these boxes are and as usual, please take with a grain of salt – things can change or be misinterpreted:

plastic Phantomwaechter  – these might be the shadow spectres? Some sort of Dreadnought-like construct potentially larger than Wraithlord.

plastic flyer combi-kit – The flyer is pretty large and has a crossbow shape, two canopies, one fin. The main variant on the cover has some lances and a large dorsal distort cannon. The other variant has extra downward/sideway thrusters, but I don’t remember if it has a different weapon loadout. No idea what these could be as I’m not familiar with Imperial Armor – anyone want to chuck ideas out?

plastic phoenix lord niadhau  – For Shining Spears, appears to be on a Vyper jetbike.

resin Black Warden – The Black Warden looks like an female Autarch. She has a shurikencatapult and a feathered guardian helm with an eye on it.

resin Dire Avenger Xentarch – Appears to be a new English name for Exarch? Could be an upgraded Exarch are new Phoenix Lords though? Will try and confirm.

resin box Eldritch Raiders – They look like guardians but have no helms and wear scarfs around the lower head and swashbuckle belts. They are very individually equipped, have all sorts blades, pistols and/or rifles. (potentially Storm Guardians?)

First off, that’s a lot of releases. Re-doing some as finecast isn’t a huge surprise (the Exarchs, Avatar + Warlock for example) but beyond that there are 12 new sculpts coming out – assuming things like the Jetbikes aren’t just a repackaging. That’s a huge release and we’d still expect to see a couple more (like a Warp Spider Phoenix Lord, particularly if they are becoming plastic; any more IA stuff? Hornets? Warp Hunters?) so this could be a combination of waves we’re seeing here.

Either way could be pretty exciting and it’s good to know Tau & Eldar aren’t the guinea pigs for 6th edition. Let CSM take the fall there :P. Remember though, grain of salt until we have sweet little packaging in our hands. Begin discussion and excessive hypothesising as we are want to do as wargamers!