More Indications for Allies Rumors being in 6th ed 40K 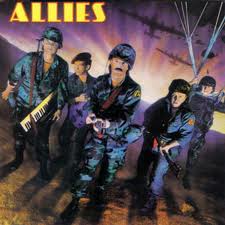 We're all in this together!

BoLS unearthed this and I thought it bore sharing. The last page is where the really interesting data it. It is a chart for allies.

That is a player packet for a doubles event, showing who can team up with who. This corroborates Tastey Taste’s information over at BoK.

So what does this mean? Perhaps allies rules are for multi-player games. The rules for Multi-Player games were in that leaked faux-rule set we saw earlier. Perhaps GW is including rules for games between more than 2 players, which would be really cool. Or, perhaps, we really will be seeing the return of allies to 40K.

That to me is more of a fun idea that something than actually makes sense from a game design perspective. It’s cool to think of Eldar and Grey Knights teaming up, but the first time you play against a Fortuned Draigostar, you’re going to want to kick the writer of that rule in the nuts.

Again though, we don’t know what the actual implementation of the rule will be, or if it will even exist at all. It may be something very toned down if it appears at all. Perhaps we’ll have reasonable rules. Perhaps not. Only time will tell, but I can say without a moment’s doubt, that allies can and will open the door to abuse in a big, big way. Each army was designed to stand on its own, and throwing in an entirely new rule-set(s) into them creates huge opportunities for breaking the game.

We’ll see what we actually get, but I know I am more than a little apprehensive about this. If we have Orks riding in Rhinos like 2nd ed, we’re going to be in for a loooong edition.

What I’m wondering is if this chart is for an event that’s dated June-July (the release of 6th) then why is the chart needed at all. Isn’t it just restating what would supposedly be in the rulebook?

Agreed, this is a recycled chart any how from what I have read so far. They used it for a previous event apparently so I think that softens the impact of it reappearing.

Ah good catch. They have a chart like this in Apoc, but it looked different.

Perhaps this is a home brew chart and not something official.

Fortune only works on Eldar units. Of course this doesn’t stop people from using it in Team tournaments at even major events. It seems to make much more sense that this chart is a friendly guideline for multi player games which have had practically no support over the years.

Taken out of context it could seem really weird.