We have been playing the hell out of Warmahordes, and we’re really loving the game.

So, I’ve gotten a good dozen games under my belt so far and while I am far from an expert at this point, I feel that I have a pretty good handle on the mechanics of the game and how it plays.

It is a really, really fun game. It plays very fast. Most of our games (35pts) are over in less than an hour. That is significantly quicker than an 1850 game of 40K. It is also a game that really rewards skill and smart play, which I love. You have to know what’s going on in Warmachine if you are going to win. 40K is very similar (the easiest way to get good at 40K is to learn what all the armies do) however, knowledge of what everything does is matched by needing to know how to get the most out of your own forces. The devil is in the details as they say, and this is particularly true in Warmachine. You must be extremely precise in how you move your models and even more importantly, the order in which you move your models.

Combos are an intrinsic part of the game and if you are going to win, you must be able to pull them off consistently. In order to do that, you have to know in which order to move which models, and to where, while also protecting yourself from counter attack. It makes for a pretty damn intricate mental ballet that is challenging, sometimes frustrating, but always fun. 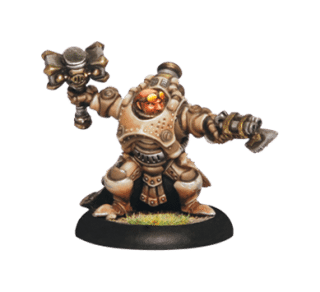 Who you callin short?

A perfect example of this is the game I played with Will today. I play an all Dwarf Mercenary force (if you’re cool, you play Rhul!) and Will plays Cryx. I had used my Feat (a once per game awesome ability each Warcaster has) to pull his dreaded Helljack and Slayer into range of my army. I then combo charged them and wiped them out in a single round of combat. Awesome! The biggest threats he had were gone. I was in a really strong position at this point but had made a tiny positioning error. I had left a gap between my charging infantry just big enough for my Warcaster to pass through. Will then used his Leviathon’s Harpoon to pull him away from the protection of the rest of my army, and then combo charged him. My Warcaster is a tough little bastard and wasn’t killed immediately. But even with the rest of my army coming in to destroy the remainder of Will’s army, he was able to assassinate my Warcaster with a few well placed spells. So, despite the fact that most of Will’s army was destroyed and Will only killed 2 of my models the entire game, as one of them was my Warcaster, he beat me! 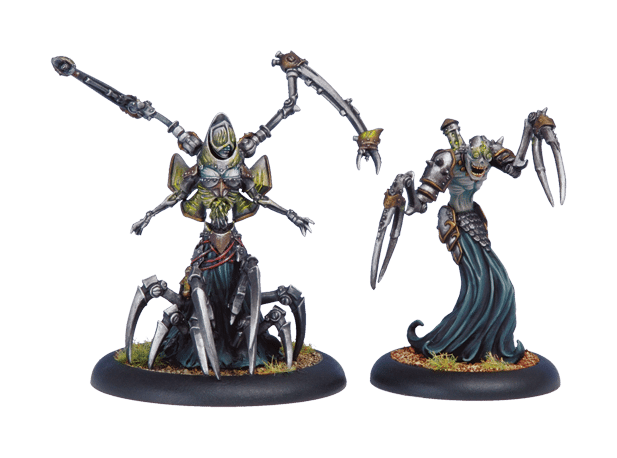 These guys came to party.

Leaving that little gap in my line was all it took. Something as small as not moving an infantry model 1/2″ to the right and a smashing victory turns into a defeat.

That is Warmachine. I have heard it compared to Magic the Gathering, and I can see that to an extent with all of the combos. However, there is a very real tactical element to it that occurs in the three dimensional world of a table top game. Maneuver is crucially important and seeing where things should develop a turn or two into the future is a vital skill.

At any rate, I am thoroughly enjoying the game and look forward to digging further into it. I won’t compare it to 40K as so many people do, as the two games are apples and oranges to one another, but I will say this: wow is it nice to have a tightly written rule set. While not perfect, and no system will be, it is infinitely more clear as to what the stated purpose and intent of a rule is in Warmachine. The rules generally are worded very clearly, with examples and often diagrams of what the author is describing. Kudos for that.

As we all go further into this great game, you will be seeing tactics articles as well as battle reports. In the meantime, my Dwarves will continue to smash face, I love those stunty little buggers!

Here is a great resource for anyone looking for more information on Warmachine/Hordes.

Posted on May 11, 2012 by Reecius in Editorial, Warmachine

Warmahordes is a great game but the thing that kills it for me, is that it’s all about the Warcaster. All the missions in the book are “achieve this” or kill the warcaster. For me, the game quickly turned in to chess. Don’t get me wrong, chess is great, but I don’t like playing it over and over again. If they changed this one rule and made the missions more objective based and warcaster death isn’t the end of the game, I’d play the hell out of it. I certainly don’t like winning/losing a game because I killed/lost one model. Just my 2 cents.

I agree on this point. I tried to play Warmachine and could not get passed the whole aspect that I could lose the game due to one model be Killed. That is what has done it in for me and unless it changes I’ll be selling off my Cryx.

Well, if you want to sell your stuff, we can do it for you!

As I stated previously, I enjoy the quick play of taking out a Caster and winning the game, but that is me. I don’t look at this as a real wargame per se, but more of a board game if that makes sense. It’s about taking out a certain piece, not about recreating a realistic battle.

Unfortunatly I live in Oklahoma and I got my figures at a good price since it doesn’t sell very well in my location. My stuff is not painted since I lost interest after playing a few games with the few people who did have the game.

Ah, well understandable. Too bad it didn’t catch on, it is a really fun game.

You may way to try out Heavy Gear, similar size (skirmish) that plays fast, relatively cheap to get into and just a super fun game.

I actually like that. I also like Chess, but I think the game is nice and simple in that you always have a chance at victory by killing the opposing Warcaster. I can see how that may not be appealing to everyone, though.

Wow, crazy game. Its weird to think that you lost while only losing two models, but think that is a nice change up too. Its like generals are an bonus victory condition that just happens to win every game. With the few games that I have played though, it seems like a good mechanic since the caster feats are REALLY good. If they could do that stuff from a distance, I dont know if it would be fun.

Yeah, it certainly changes the way you think about the game. I am learning a lot more with every passing game, and my army really takes some thought. Will’s army is a blunt force instrument. You run forward and look for that chance to assassinate the caster. Our armies are really different. It’s cool, just a steep learning curve with this game. You need to be patient as you learn how to counter all of the units in the game.

I admit that sometimes the loss of a single model being the end all of the game can be a little boring after spending 3 turns of wiping the enemy infantry from the board. On that subject there really isn’t an official scenario that doesn’t end with caster assassination since Mk2 came about unless we look at larger scale games of 100+ points where you take multiple warcasters/warlocks.

I have been thinking about play-testing some scenarios that don’t specifically end with caster kill but until there are no fighting units left. Jacks would still go inert after caster kill.

If anyone feels like playing around with me on this send me an e-mail. davidrudkin@comcast.net

I do like it as a change of pace, it just takes a little getting used to. You have to get your yead around the fact that all your other units are expendable. I find myself systematically destroying enemy units as I would in 40k and it often leaves me at a disadvantage if I don’t stop myself.