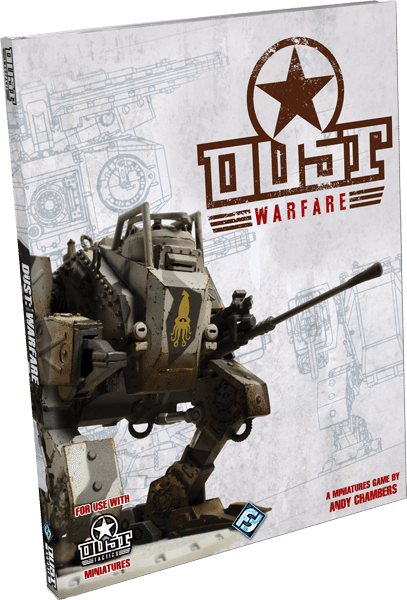 I was told by a reader at BoLS that the leaked 6th ed 40K rules were in fact the Dust Warfare rules.

Can anyone confirm this? If so, that is very interesting as Andy Chambers is one of the two writers of the game. http://www.fantasyflightgames.com/edge_minisite.asp?eidm=173

If so, this does imply that perhaps Mr. Chambers was possibly connected to the leak as a really smart, if slightly unethical, way to bring a lot of attention to his rule set by riding on the wave of 40K enthusiasts. Please bear in mind that that is strictly me speculating there, and not based on fact.

The rule set was largely met with enthusiasm from my web ramblings. There were a few dissenting voices, but in general the rules were liked. I personally really liked them.

Also, they come assembled and primed in colors that match the army they correlate to.

The game looks pretty dang cool, and I am finding myself tempted to give it a go.

But if in fact that leaked PDF was in fact the rules for Dust Warfare, then I am even more intrigued as that looks like a really fun game. And well done on the guerrilla marketing!

If anyone has played Dust Warfare and can confirm or deny this, or has any other info on the topic, let us know!

Unless DUST has an entirely new ruleset, it’s not at all true. They have NO measuring, use their own special dice, etc. It could never be like warhammer. As a matter of fact, from the demo I watched it’s a godawful ruleset and more a board game.

Hmm, well that settles that, I suppose. No measuring? That’s weird. What do they use to determine distances?

And yes, I love the minis, too!

This is Dust Tactics you are talking about not Dust Warfare. Tactics is a board game, Warfare is a table top game.

Yeah, that makes sense. There are quite a few Dust games, he might be confusing one of them.

I don’t know if they are dust warfare’s rules, but I have a sneaking suspicion that they were part of the advanced rules for 40k that were supposed to be part of 4th ed, that actually binned by Andy’s separation from GW..

That could be true. I really liked those rules, though. It’s a shame if we don’t get them because they made sense on so many levels.

I am really excited/nervous for what we get with 6th, because a lot of the recent rumors sound not so good to me.

Seems all kinds of unlikely to me… the game would have to involve the same statlines as 40k and very similar rules, and that would hardly be worth the lawsuit. And I guess… what, someone then went through the Dust Warfare rules and changed every single reference to Nazis to Marines or something? Just… why?

Which is why I asked. It seemed a bit far fetched, but as far as a very clever marketing trick to get folks to look at your rule set, then it would have been pretty ingenious. However, as you said, it would also have been very risky and time consuming. It was an interesting bit of rumor though, that I wanted to dig further into and see if it had any veracity which it sounds like it does not at this point. Although, it does sound like there are some similarities.

I dunno. Sounds a little dangerous to slap the name of a company you’re partnered with on something that would compete directly with them.

mercutioh
Reply to  Son Of Dorn

also it’s pretty risky to toss in things like GW IP (stats for guard and Chaos) in the mix for a faux ruleset.

True, that could be grounds for a lawsuit if the culprit were uncovered.

Agreed, GW is so trademark crazy. I cant see mister Chambers being able to get away with this.

Reecius
Reply to  Son Of Dorn

Yeah, I see your point. However, everyone already knows about 40K, so in that sense it wouldn’t change much. If it got out that a really cool rule-set was actually for the game you are selling and you got all of the 40K fans to check it out (possibly getting a few of them to buy your game) then it seems like a smart move to me on some levels.

The “Leaked” 6th Ed. rules are not the rules for Dust. They do share some similar aspects but they are no where near the same. Just for starters models only have three stats, I could go on but trust me they are completely different.

That isn’t to say Dust is bad however, it is really well written game. The rules are surprisingly tight and I totally suggest trying to get in a demo game. The scenario set up is rather brilliant too, you bid (sort of like the Leaked 6th PDF) however you are bidding on things like having objectives or extra terrain. The idea is that you are bidding to craft the scenario to make the most of your armies strengths.

Ah, thanks for the insights. That still does sound really cool, though. I really like the alternate WWII setting, and the aesthetic of the miniatures, plus Paolo Parenti’s art is awesome.

I think we will have to give it a go here at the store.

Wasn’t there a pretty complete codex errata too with the leak?

My personal suspicious about the leak is a follows:

1). It was to be the new edition, or something very like it;

2). GW couldn’t admit that something so major was leaked, least they violate their privacy arrangement with The Hobbit people;

3). Thus, there will be NO new sixth edition, or the to-be-released sixth edition will be mashed together quick, and will suck.

Gosh, I hope you are not right on that one. I could see that, but holy crap would that be bad.

They are nothing like each other. Not even close. I would call this very false.

OK cool, thanks for the heads up. I heard the rumor and wanted to confirm it.