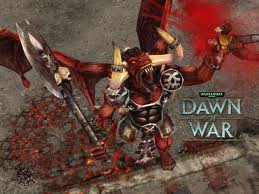 Who's not looking forward to a new Dawn of War game?

Reader Rantimus Prime brings us some information on Dawn of War 3, from Relic.

Thought youy might like a read, it seems that Relic (DOW 2 and SM developers) are making DOW3 a MMO with fully customisable armies and all the goodies listed in this article. theres a bit of hype that next E3 they will anounce this as a def and give us a launch date.

I will keep looking into this and keep you informed if you want (dont mind helping out) you nevered played this but as someone who loves the universe and the game, this is very similiar to 40k (espicially if you dont have access to gaming but do a computer).

An MMO? Sounds interesting. If you cna build up your own custom army to a specified points value as you can with 40K, and then play online against other gamers with their own custom armies, that sounds pretty awesome. I have mixed feeling about taking the game to a digital format to the extent it sounds like this one will. If you really can build your own army and then play on the computer, that may take people away from the table top. However, it may bring new people into the hobby, too.

It’s hard to say. I love table top gaming because of the human interaction. I would much rather be around my buddies, face-to-face, drinking a beer and enjoying jokes and a good game of toy soldiers than do the same on-line with friends I don’t actually see, or may not even know. Maybe I’m just old-school, but I prefer my relationships to be real, just as I do my games.

That said, I will definitely give this game a shot. I loved DoW1 and its expansions and played the hell out of that game in my free time at home. I skipped DoW2 as I heard a lot of mixed reviews about it. We’ll see what the latest iteration in what is easily, IMO, the best representation of the 40K universe in digital format.

← KingdomCon is Close to Selling Out!
New Projects Completed →

4 Responses to “Dawn of War 3 Rumors”