Of Orks and Tournaments: 40K Editorial

You are here: Home › 40K › Editorial › Of Orks and Tournaments: 40K Editorial 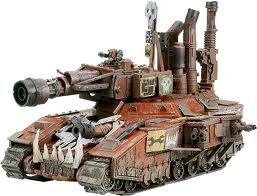 A guest editorial by Captain Dees. Do you agree with Cpt. Dees opinion here, or is Captain Dees’, nuts?

Orks were my first 40k army and in my opinion a fun army to play.  Though I’ve gone and acquired many different 40k armies and have played other game systems as well, Orks still have a special place in my heart.

Many an Internet site will tell you that Orks are a bad army, and you are foolish to expect much out of Orks in tournaments.  Yet time after time I see Orks placing well in events both large and small.  A few voices have spoken up about Orks not being as horribad as people say they are, but they are certainly in the minority.

This last weekend I played in a local con and tied for 3rd overall (Dundracon, the event Reece took Best Overall).  Another Ork warboss took best general.  As it so happens I took Best Overall last year at this same event with nearly the same Ork list I brought this year.

Also last weekend 3++ con happened down under, and I’m struck by how many ork players managed to do well.  http://www.3plusplus.net/2012/02/3con-results.html  Last year at the Bay Area open Orks also had a good showing on the top tables.

So how can this be the case?  If Orks are horrible how is it they end up doing well at these events?

Of course there are no definitive answers to this question, but I’ve got a few thoughts on why this might be the case.

1)      They aren’t marines.  I know this sounds obvious, but whenever I plan to go to an event with any 40k codex the first thing I ask myself is ‘can I beat marines?’  It then usually spins off to the various flavor of the day, but in general it means tweaking a list to deal with 3+ armor and multiple rhino chassis.

Of course if one plans too much for marine variants you might find yourself looking across at a mass of boys wondering how in the world you are going to throw out enough shots/attacks to deal with all of those bodies.

2)      Cover saves make up a lot that is lacking for an Ork army.  Most Ork generals see the ridiculous value of having a KFF Big Mek, and this means it is quite easy to make sure both troops and vehicles are harder to kill than standing around being shot to bits in the open.  With or without a Mek there is almost an art to getting cover saves that Ork and Tyranid players fundamentally need to know.  I know the current trend is about volume of fire, so for any Ork army just GETTING to combat is half the challenge.

3)      Battlewagons are (relatively) cheap and FA 14 (likely with a KFF) is nothing to sneeze at either.  The most reliable anti vehicle weapon are Meltas, but usually by the point melta is in range the opponent is going to eat Power Klaw the next turn and the wagons have done their job.  I think we’ve all seen a huge reduction in Str 9-10 firepower across the table.  This means AV 14 with cover is not easy to stop.  I will take 15 Long Fang Krak missiles or Dakka Dreads to FA 14 with cover saves all day long.

Of course the trick here is the need to position the vehicle well for that FA 14 and run multiple wagons.  Spammed STR 8 might immobilize one wagon, but 3 will be a lot tougher.

4)      Do not underestimate how hard it is to shift 30 boyz off an objective or two… or three.  Being able to use a big mob to bubble wrap softer units, conga line out for cover saves, or squat on objectives is one reason I find a big boyz squad so flexible.   Yes I know there are units that can deal with a big blob of orks but usually you can engage those with your forward elements that consist of even nastier boyz.  This brings us to…

5)      Ghaz is a monster.  There are plenty of hammer and anvil units in the game, but when I look at ‘how will I deal with uber X unit’ Ghaz  + Close Combat is almost always an acceptable answer.  Though, of course, there might be better solutions to those problems Ghaz is able to tangle with anything.  You just have to get him there!

For anyone who has never seen (or maybe just tried to forget?) Ghaz in action he has 7 attacks on the charge with a str 10 Klaw, Eternal warrior, and a 2++ save for two rounds of combat, and better than average WS and T.  There is not much that can stand up to that punishment.

Now add in the auto 6” Waagh that you can call your turn or your opponents turn. That movement that you can count on is just huge.  13” wagon move with paint, 2” deployment, 6” Waagh and a potential 6” assault is a 27” threat range.  This catches people off guard more often than not.

6)      Orks seem to buck the trend of the armies that surge in popularity at release then dwindle down to a handful of occasional players.  Most Ork players have a great desire to play their boyz, Internet haters be damned!  I believe this does lend to a group of warbosses that are both fun to play against, but who also actually know how their army works!  I know my list has changed very little since the dawn of 5th edition, so it is very easy to pick them up and give them a go since I have had a zillion games with them (roughly).

7)      Soft scores can certainly help, and since many of the aforementioned warbosses have been playing the boyz for years they are usually a complete army.  Of course painting skills can vary but even table top painted Orks that are ‘done’ look pretty cool when you are talking about 100+ bodies and vehicles.  I’d also argue that Orks have many great conversions and bits that can be used and this can help with the overall army look and feel.  Plus, as I mentioned, most Ork generals have a bit of, eh… orkiness when playing.  I’ll admit to dorking out (more than normal) when playing my Orks and doing/saying silly Ork things.  I think it takes a bit of that when you know you are going to be pulling boyz off the table handfuls at a time!  I think this makes for fun games, and so long as da boss isn’t over the top this might even help in any sportsman category.

I think these things are a few reasons we see Orks being played and played well despite there being many great and newer armies for people to chose.

Of course list building (Ork horde vs Mech Orks vs Hybrid) and math hammer (Grey Hunters will beat orks in CC blah blah blah) are all well and good, but nothing tops a cunn’n warboss!

If we shift the conversation to the competitive depth of the book I think I’m more in line with some of the negative thought on the codex itself.  There are plenty of choices that do range from sub par to just plain horrible.   I’m looking at you Flash Gitz!   I know GW thinks that making units that are random is very ‘Orky’, but they are usually just not fun if you are actually trying to win a game.   Hoping the Studio changes their opinion of this is probably a fools dream.  However there are enough good options in the book to build an army that can still lay the smack down even against the new shiny ‘dexes these last few years.

So we’ll see how the Bay Area Open turns out this year.  I’ll be in attendance with my Orks, so I might be back with a ‘see I told you’ or a ‘boy was I wrong’ post!

So what do you all think? We here have been saying for years that Orks are completely underrated by the internet pundits. They are very good and consistently do well in tournaments, as Cpt. Dees points out. What say you all?

13 Responses to “Of Orks and Tournaments: 40K Editorial”