The Tournament Season has begun!

You are here: Home › 40K › Editorial › Tournament report › The Tournament Season has begun!

Knights are so cheesy!

A new year means a new tournament season, and we’re off like a shot! Let’s take a look at some of the results we’ve got coming in so far.

The Wild West Shootout was run over this past weekend by Battlefoam.

It was a rather expensive event, with tickets coming in around $100 for admission to the con and the 40K GT.

The top finishers were:

We don’t have the exact list, but I was told it was a Ghaz Battlewagon list, with 4-5 Deff Rolla Battlewagons.

So, the internet should be exploding. Yet again, we see players winning with lists and books that are either widely considered to be bad, or under-powered.
Orks, yet again, coming out in a healthy position. Orks consistently win or place well in tournaments. It still baffles me how some internet pundits say they are bad. On the west coast, some of our best players are Ork players. Geoff, the Ork general, is one of the most skilled players I have met. He comes from San Diego and is one of a crew of players down there that if they played in the big tournaments, everyone would know their names.
Perhaps that’s why we respect Orks more on the West Coast? Player skill compensates for the army weakness? Or is the other way around, that Orks are not as bad as the internet thinks and that players elsewhere struggle with them.
I couldn’t say, honestly. But what I do know, is that over and over again, Orks do well in competitive events. I personally think that if not for Grey Knights, they’d be a clear Tier 1 army in terms of pure power. I know some don’t agree, but hey, that is why they call them opinions.
What else is going on here? Blackmoor doing well with his Draigowing, although now, that is nothing new. After his performance at the BAO 2011, and NOVA, Draigowing has become a fairly commonly accepted tournament list. With a combination of multiple, resilient scoring units, KP denial, and powerful shooting and assault, this is a list built to win missions. And it does.
Dave Fay, the newest member of Team Zero Comp, beat Geoff Zatkins and his Orks, but narrowly lost to Blackmoor in the final game. For those of us from Southern California, this is a common story. Those three have a history of meeting each other in tournaments going back many, many years. It came down to the last toss of the dice in Blackmoor’s game with Dave Fay, but Blackmoor came out ahead this time. Well played, Alan.
Dave’s Black Templars are a brute force instrument. Very similar to Missile Wolves, they rely on absolutely dominating the shooting phase. WIth 28 missiles a turn, many of which have Tank Hunters, they put even my Bjorn Wolves to shame! I remember when 5th ed came out, and everyone was beating the MM/HF Speeder drum, while a few of us were saying Typhoons all day, every day. Now we see just how good those little speeders are. Dave uses them to great effect, and he nearly won Comikaze 2011 with the same army, but when fellow Zero Comp Teammate ChristianA stole the initiative on him in the final game, he wasn’t able to recover.
His army shoots like mad, but also has enough HtH punch to keep him out of trouble and really beat up on some armies. His only real weakness are his troops, but smart play can mitigate this. 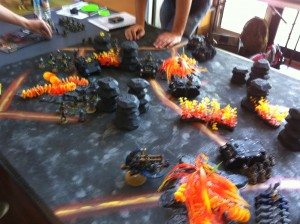 Frontline reader, Rantiums, brought us coverage from an Australian GT, Tropicarnage. Tropicarnage took place in Cairns and had an attendance of 54. Rantimus took 10th with his Blood Angels, and relayed what data he could to us about the other top finishers which can be found here: http://www.rankingshq.com/public/tournamentprofile.aspx?tournamentid=2548

The interesting thing in my mind was that 1st was taken by Crons. First event of the year, and already off to a strong start for the Robo Warriors! Fantastic!

The top 10 armies at this event were as follows:

Hmm. Pretty good spread, there. Again, Orks, Bugs, and CSM. Again, the internet would lead you to believe that would now happen, and yet there it is. No Wolves (although it appears there were none at the event!), and only 1 IG player, but 2 Grey Knights and 2 Dark Eldar. Once again, good players winning with “bad” armies.

Here is the top Cron player’s list we dug up sas Rantiums reported it to us:

So, a mini Scarab Farm with Wraiths, Command Barge Overlord, Destroyer Lord and a few objective holding scoring units. Those seem to be consistent elements we see in winning Necron Lists.

So what does this all mean? For now, not much. We need more data to really tell, but as a starting point this reaffirms what we see every year: that good players win with any army.

We’ll continue to analyze tournament data as it comes in, but so far we are off to an exciting start to the 2012 tournament season.

Here are some pictures of Tropicarnage and an interesting anecdote about the event after the pictures. 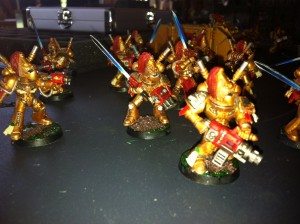 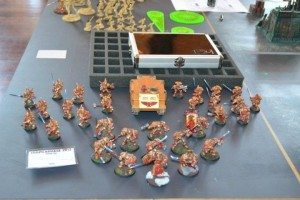 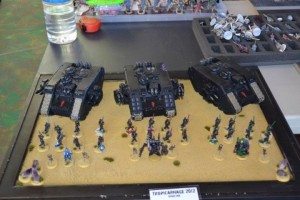 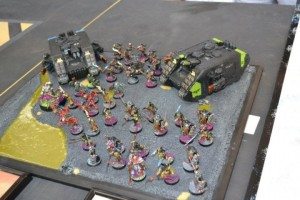 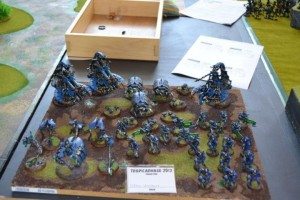 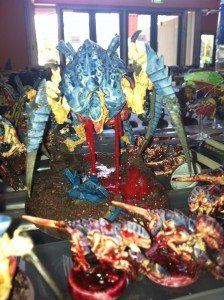 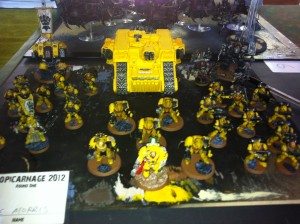 From an attendee of the event, apparently the Gentleman that won the Cheese Award for bringing a Grey Knight army of 3 Land Raiders full of Death Cult Assassins was not happy about winning the award, and when talking to a Blood Angels player at the event, told him that he had read Raw Dogger’s “Vampires Suck!” article series on this very site, and told the Blood Angels player that his army was therefore crap!

Well, we’re happy to hear that people are reading our articles, and we don’t know what was actually said that day. But, everyone, those articles are meant to be humorous! Raw Dogger is a jokster, please don’t take them as actual tactical analysis!

At any rate, well played to all of the Tropicarnage Attendees and please send those results, pictures and stories coming!

Posted on January 11, 2012 by Reecius in 40K, Editorial, Tournament report

2 Responses to “The Tournament Season has begun!”