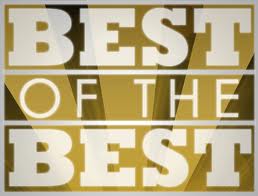 Be the best with your army!

This is a great idea introduced to us by Kasil, one of our blog readers. This is a prize given to the person who performs best with their army. So the best Blood Angels, Dark Angels, Space Wolf, Space Marine, Black Templar, Tau, Sisters of Battle, Imperial Guard, Chaos Space Marines, Chaos Daemons, Eldar, Dark Eldar, Necrons and Tyranid player will receive a prize and the knowledge that they were the best player of that army at the Bay Area Open!

If this player wins another prize, they will still get the trophy, but will receive the larger prize of the two they win, not both.

Why are we doing this? Besides really beefing up the prize pool, this will bring a lot of diversity to the competition. Variety is a good thing! You may not win the entire tournament, but you can win best Tau player, etc.

This also means that even if you lose a game, you can still strive to win a prize and a trophy!

We think this will really add a lot to the event, and are very excited to add it.

We are considering adding a similar feature to the Fantasy event as well! Let us know what you guys think.

One Response to “Best of Army awards added to the Bay Area Open 2012 40K singles championships!”