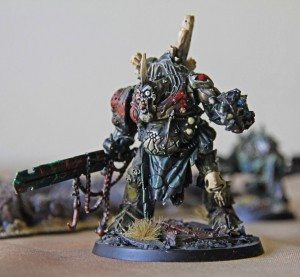 Give us a kiss!

This week Frankie will be going over his list in detail and what each unit is supposed to do during a game.

First off let’s start with the Deamon Princesses[sic]! they may look cute and cuddly but don’t let their little wings and puss covered bodies mislead you: they are for sure one of the hardest hitters in my army. When the two of them assault a unit they usually demolish it. They are toughness six models with four wounds, a three up save and a five up invulnerable save. They are also trained by the Tzeentch gods and therefore have warptime, a spell that allows them to re-roll failed to hit and to wound roll’s in close combat, and can be cast in either player’s turn. The two deamon princes play a very important role in my nurgle army by attracting most of the fire for the first couple of turns. If they are still alive by the time I’m in the enemy’s lines they will crush units very quickly, particularly when they both assault the same unit. I run the Daemon Princes behind my rhinos so that they can claim a four up cover save from all those scary units like Long Fangs and such that we see so commonly in tournament builds these days. Against heavy assault armies I use them as a counter assault units, flying to wherever my Plague Marines need them. I like the deamon princes very much and think they play a great role in my Nurgle themed army, and are much better than Lash princes, which tend to get wasted too easily by long range firepower.

Second let’s talk about the real back bone of the army: the mighty Plague Marines. These little badasses win me more games than I can count. The plague marines are kind of an underestimated threat since more people are worried about the two deamon princes and the Obliterators more than the four rhinos with troops inside driving across the field at them. The plague marines usually survive while people shoot at the other units, and when the puss ridden warriors unload, people realize that they are toughness five and have three meltaguns in each squad plus a plague champion with a powerfist, they immediately regret their decision of not shooting at my troops. The Plague marines are one of the best troops in the game in my opinion, and they prove it game after game because they are so versatile. They can kill tanks, hold up scary units in close combat, take charges from all units since they have blight grenades (defensive grenades) and usually whip on them over time with their two attacks base, fearless and feel no pain. Plague marines are my vote for best bang for your buck troop unit.

Lastly we have the Obliterators. These big guys are an extremely good heavy support choice, the only one in the codex in my opinion. They are toughness four, two wound gun platforms with powerfists. The obliterators can shoot a twin-linked plasma/melta/flamer, or lascannon, plasma cannon, and multi-melta. These versatile fellas have a gun for every situation and since I run three squads of two I can deep strike them quite easily where I need them. The oblits are the Swiss army knife of my list, having a tool for any situation and cleaning up any mess the rest of my army leaves behind. I use the oblits in my list for whatever I need them for each turn, against most armies I deep strike one unit towards something scary and usually they kill it, and if not, the soak up a few unit’s firepower. Without the obliterators in my list my, Plague Marines wouldn’t survive for as long as they do and my list would really lack the long range punch you need to be a true, take-all-comers list.

So that’s the list and how I use! Pretty simple, really as there isn’t too much to it. I focused on taking the best units in the book (IMO) and using them well. Next week I will go over good and bad match ups so if you guys want to hear about any units in particular just post a comment and I will be sure to include them next week.