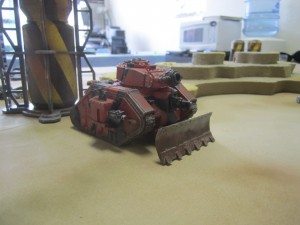 The Leman Russ Demolisher: Who needs a Manticore?

In reality it is a tank you rarely see on the table top in favor of the far more popular “Leaf Blower” style list which relies on lots of Av12 vehicles.

I have played Imperial Guard since 2nd Edition, back when the “Standard” Imperial Guard army was a crusade force, with each platoon in your force coming from a different planet. You had armies with Cadians, Catachans, Valhalans, etc.

I, however, have always had a fondness for Catachans and my army has, and always will be composed of the steroided out little bugger! I guess I watched a few too many Arnold Schwarzenegger and Vietnam flicks as a kid, because these guys just appeal to me on some basic level.

At any rate, I have had a pet idea for a long time that making an army comprised of nothing but AV14 vehicles and Infantry hordes would make for a really powerful meta busting force as it effectively eliminates or diminishes the Str6-8 spam we see in the competitive meta these days. All those Auto Cannons, Missile Launchers, Scatter Lasers, etc. would be largely wasted points.

In order for this to work though, you would have to have a LOT of Av14 tanks and Infantry in order to hit a critical mass where you could absorb incidental casualties and overwhelm your enemy.

So, I wrote up the following list with those principals in mind:

The list has some choices I know a lot of people out there may laugh at. Fair enough, they are unorthodox choices. But, when analyzed from a Meta game perspective, they make a lot of sense.

For one, you have a huge (50 strong) brick of troops with 5 las cannons that can easily hold multiple objectives and is a very hard Kill Point to earn. It is also good in combat, with 4, base 3 attack power weapons, and a Commissar Lord with 3base WS5, str6 Power Fist attacks (just be really careful where you place him in combat as he can easily be killed). He also has a Camo Cloak that gives the entire unit a 3+ cover save! Must be a big cloak =) He isn’t a unit upgrade like the normal Commissar, and a CCS can issue orders to the blob to make them more potent in shooting, but the defensive and leadership benefits he provides made him my choice, and his Power Fist will really surprise people.

This unit holds the fort and kills enemy tanks and MCs with their las cannons.

The Penal Legionnaires are for going out and grabbing objectives. They are stubborn and can scout, which means they are mobile enough, and fairly dependable. Their bonus abilities are all good, and I see them as a nice benefit to being stubborn scouts.

The Platoon Command Squad is a counter assault unit with it’s 4 flamers and also an aggressive objective taker. They are easily killed, but due to their small size, they can fairly easily hide and move up field to take objectives with careful play and adequate terrain.

The Rough Riders, besides just being plain awesome, are a mobile counter attack unit, and objective contesting unit. For their points, these guys really do serve that roll very well. I know the Vendetta is the better choice from a points efficiency perspective, but that would be an easy target for all your opponent’s mid strength weapons. Rough Riders are also great for killing all the MSU scoring unit upgrade style squads we see in Razorbacks and such in the current tournament Meta. Plus, they are fast and can contest objectives, and winning a tournament with a list that has Penal Legionnaires and Rough Riders earns you mad style points!

Lastly, the heavy lifters of the list: The Russes!

Beyond just being cool, these tanks really do pack a mean punch. I chose to go with 3 different types, all in squadrons of 2.

The stock standard Russes with 3 Heavy Bolters each put out a staggering amount of firepower. That is 2 pie plates and 18 heavy bolter shots at a single unit per shooting phase. The thing I think a lot of people miss is that all of this comes in at once, meaning you will stack a metric crap ton of wounds on whatever you shoot at. Even with wound stacking shenanigans, in play testing pretty much anything this unit fired at was destroyed in one shot.

The Demolishers are an aggressive, move forward and crush unit. This is my sacrificial tank Squadron, so to speak. The big Str10 ap2 cannons on these monsters scare the pants off of most opponents, and so these guys attract the most attentions, typically. I run them naked to keep them cheap and mobile.

Lastly, are the absurd Plasmacutioners. These are Leman Russ Executioners with Plasma Sponsons. 10, count them, 10 plasma cannon shots per turn, at a single target. I have stacked obscene amounts of hits on targets before with this unit, and the resulting damage is out of control. This unit just absolutely wrecks pretty much anything. I love them! They are pricey, but who cares? When they work, the resulting carnage is so worth it.

So, you have an army with reliable, fairly mobile scoring units, and the ability to take on 2+ heavy infantry, light tank spam, heavy tanks, MCs, Infantry Hordes and has enough counter assault to keep itself out of trouble. 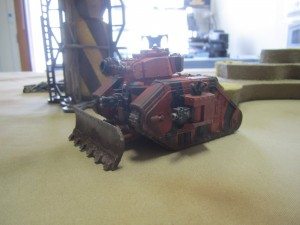 He's such a handsome tank, we needed another angle on the little guy!

So, how did all this theory pan out in reality?

However, the list I had was slightly different as I accidently grabbed the  wrong bag, and so had a Chimera for the PCS, a CCS with an Auto Cannon instead of the Commissar Lord, no Rough Riders and a Commissar in the Blob Squad. Not too different, but it deserved mentioning.

Another point that deserves mentioning is that the tournament was held at Battle Bunker Games in Antioch, CA. These events are the second Sunday of every month and have a very high caliber of player in attendance. They are very competitive, and a lot of fun, so come on by if you are in the vicinity!

My first round opponent was an unconventional Infantry Black Templars army commanded by Dok Dragon. The mission was Dawn of War, Annihilation. This was a crap match-up for him as he was charging into the teeth of my template weapons. It still could have been a winnable fight as his 2 Bike Mounted Marshals and his Emperor’s Champion made it into my lines (and those units alone could have killed my tanks with a little luck) but my Penal Legionnaires went bananas! I rolled Knife Fighters for them (giving them an extra attack and redning) and they managed to kill the Emperors Champion, a Marshall and knock the other Marshall down to a single wound before the game ended! They kept losing combat but due to Stubborn, they hung in there, and dang near killed all the BT characters. When the dust settled, it was the lone wounded Marshall vs. a single remaining Legionnaire. The Russes handled the other Infantry models as expected and it was a victory to the IG.

My second round opponent was a Nob Biker Ork list, with 30 Lootas. The missions was Spearhead, Capture and Control. Perfect test match! His Nob Bikers could easily kill my tanks and go through my Blob. This would be a good test of my army’s strengths and weaknesses. His Lootas couldn’t do squat but shoot into the infantry blob in cover for minor to no damage. The Russes wasted the Nob Bikers in 2 rounds of shooting. He conceded at that point as his army was essentially neutered. He rushed headlong at my tanks with his Nobs, which was a bit foolish. They are resilient with Turbo Boosting, but come on, you don’t go right at 6 Tanks that ID your boys and ignore FNP. Had he been a bit sneakier with them, it would have gone better, but hey, thems the breaks. The Penal Legionnaires outflanked to kill his Grots on his objective and take it for me. Another solid victory to the IG.

My third round game was against Raw Dogger, a Zero Comp teammate with his Blood Angels. The mission was Pitched Battle, Seize Ground with 5 objectives. He had 3 squads of Assault Marines with Priest support, 2 Las/A.Cannon Preds, Meph, a Libby, a Tac Squad, and a Dev Squad with 2 M.Launchers and 2 P.Cannons.

DoA can really screw IG, and Raw Dogger is a good player, so I knew this would be another good test of the list. He was playing for objectives and we were trading shots (to his disadvantage, as I had so much more firepower) and then one dual melta Assault Squad came in and destroyed both Plasmacutioners in a single volley! Doh! That is the downside to being in squadrons. I then wiped them out with counter fire and the following Assault Squad as well when it came in. The Penal Legionnaires rolled up Psychopaths, which gave them Counter-Attack, Fleet and Furious Assault. They killed 4-5 Marines and a Librarian! The little buggers were blood thirsty! The game was close up until turn 4 when my Leman Russes blasted his Tactical Squad down to 2 models, who failed their morale test and ran off of an objective and off of the board. That left Raw Dogger with no way to win the game and he conceded. I feel that had he played a little more aggresively, and not deep struck, but just bum rushed all of his assault elements he had at me, including Meph, it would have been the better play.

So I ended up winning the event, and felt good about the list. It obviously needs more play testing, but I feel that this list is ready to go to the next level and start playing with the big boys in Tier 1 land. The Penal Legionnaires were all-stars in every game! Of course, they won’t always do well, but they served their purpose above and beyond expectations. The Leman Russes were brutally effective and when combined with nothing but masses of cheap infantry, provide really crappy target choices to most armies.

I think Dark Eldar Dark Lance Spam will be my nemesis but you don’t see that much at tournaments. I hope to draw Draigowing! Haha, that would be ugly. Against your typical MEQ list, Orks, or anything lacking AV14 killers en mass, this list will be a solid performer, and it is something different, which is always nice to see.

I will post more pics of the army as I am in the process of spiffing up the tanks a bit.