40K Editorial: Snatching Defeat from the Jaws of Victory, by Luis Gonzalez

You are here: Home › 40K › Editorial › 40K Editorial: Snatching Defeat from the Jaws of Victory, by Luis Gonzalez 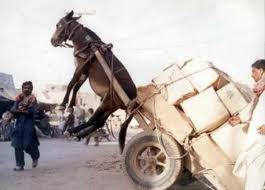 My tactics, much like this poor ass, don't always go as planned!

Hello good people, my name is Luis Gonzalez. My handle on the forums is Brother Captain Pancho and I am the Gentleman who edits all of the Video Battle Reports you see. I also play Imperial Guard, as do most civilized people.  My army list is a Leaf Blower variation that I will be talking about.

The reason this article is called “Snatching Defeat from the Jaws of Victory” is because I am going to talk about tactics that oft times seem to fail me for reasons that leave me perplexed.

My tournament list, straight from the best tournament forums, mind you, is supposed to be able to win, if not dominate in games. Instead I end up losing terribly or getting tabled! Absolutely barbaric, I tell you!

I do tend to give cover saves to my opponents. I guess I consider myself a  fair and sporting gentlemen! No reason to shoot those plucky chaps on the other side of the table with no chance of them living, that would be quite rude.

Another tactic that doesn’t seem to work as planned is moving my troops inside chimeras towards heavy assault armies like Orks, and Khorne Bezerkers. Why sit back and just shoot? That wouldn’t be very sporting, would it? The results, let me tell you, are quite appalling! It turns out that Khorne Berzerkers are not very kind chaps! They chopped my tanks right into bits, it was dreadful. That Kharn the Betrayer is a scoundrel of the lowest order, and I would daresay, he is both shallow and pedantic. Always spouting, “Blood for the Blood God.” The Man simply doesn’t have much in the way of conversational skills, does he?

I was playing a fellow Zero Comp teammate Reece in a tournament, and I decided to charge forward with two veteran squads against said brute, Kharn the Betrayer, as I thought I could shoot him down before he got to me. I was in in for a rude awakening when he not only made all his invulnerable saves but managed to chop in half both chimeras and kill all the guys inside. I thought to myself: I immediately regret this decision.  Such callous behavior is not the mark of an honorable warrior. Bad form, sir!

Well, off to drink some tea for me. Until next time good people.

4 Responses to “40K Editorial: Snatching Defeat from the Jaws of Victory, by Luis Gonzalez”