If you’re an Ork player like me, get pumped for their impending Codex! GW has given us this fun article about the Orks to get the hype train rolling…choo choo!

The first day of Orktober is here at last! We’ve got stacks of cool and exciting stuff to show you and talk about over the coming weeks, but before we get ahead of ourselves, we thought it only right and proper to formally introduce the Orks to those who may not be familiar with this fan-favourite, belligerent, green-skinned race. 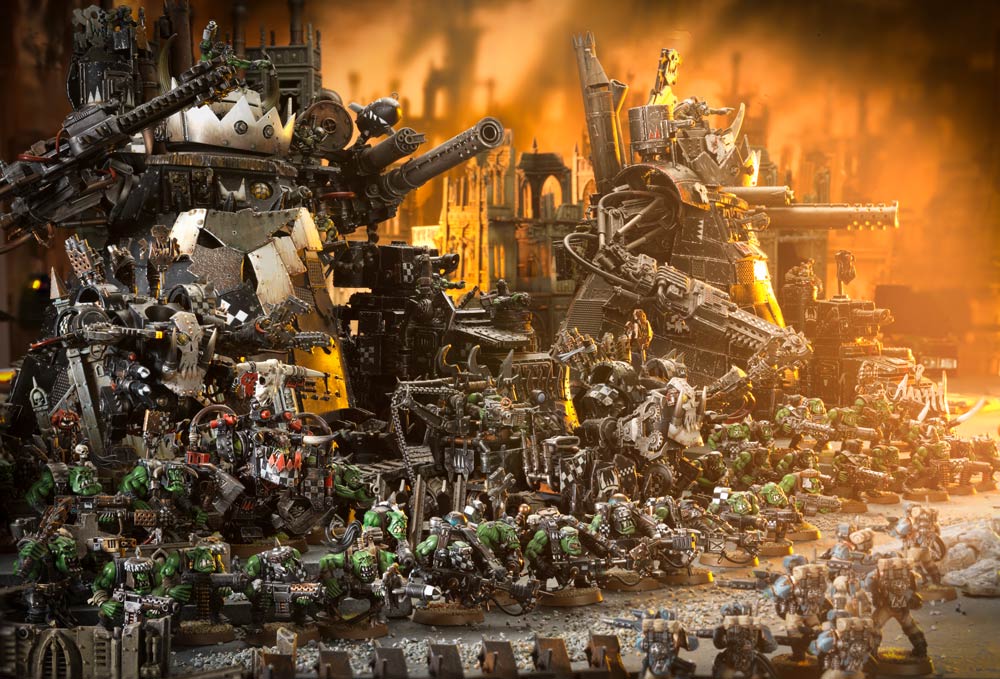 Ever since Mankind first set forth across the stars, it has been subjected to war and death on a scale previously undreamed of. Yet of all the myriad xenos races responsible for this relentless warfare, the Orks are in a class all their own. A crude and warlike breed of hulking brutes, the Orks love nothing more than a good scrap – so much so, in fact, that in the absence of a suitable enemy to take their aggression out on, they will readily fight amongst themselves just for the sheer joy of it. As such, any attempt to reason or negotiate with Orks is doomed to failure. 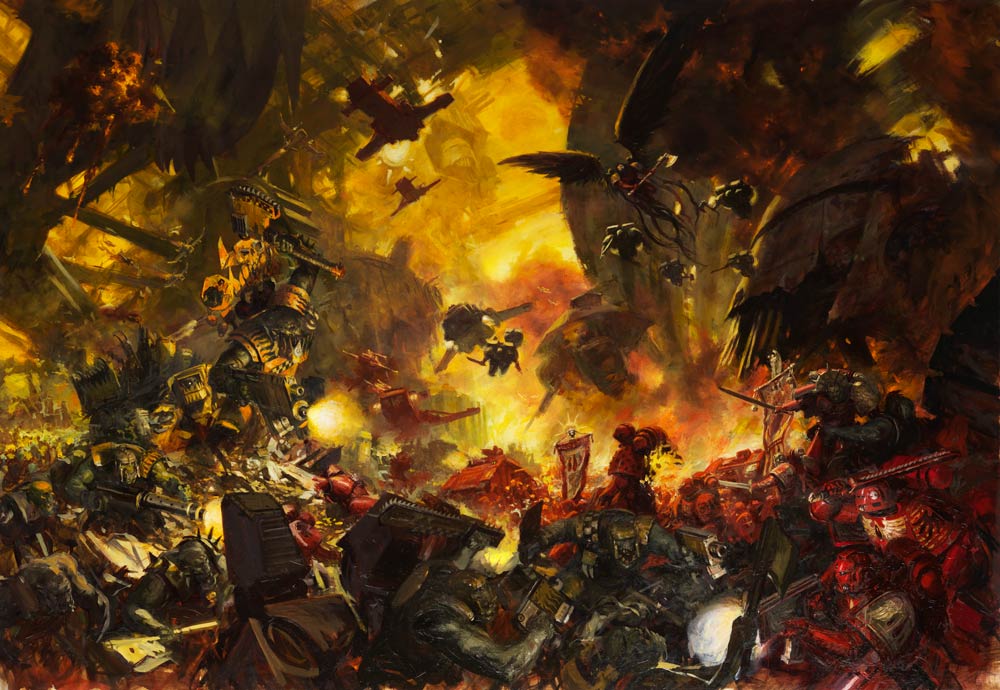 Orks have been encountered in every corner of Imperial space, and due to their unique biology and the incredible rate with which their populations replenish, they are all but impossible to eradicate. Even the most ruthless purge of Ork numbers seldom earns little more than a temporary respite. The question of how to rid the galaxy of the ‘greenskin menace’ has vexed Imperial scholars and agents of the Ordo Xenos for thousands of years. To this day, Orks remain one of the most bitter enemies of Mankind, responsible for the loss of countless trillions of lives, vast tracts of territory and once even threatening Holy Terra itself.

Ork populations in their infancy form crude and barbaric societies founded on the notion of ‘might makes right’. Due to a quirk in their physical development, the most aggressive and dominant of their kind grow, accordingly, into the largest and most powerful of their tribe, which in turn is led by its strongest member. As their numbers increase and their encampments develop, rival tribes are conquered or otherwise subsumed into larger groups. It is at this stage that Orks begin to emerge who have an innate knowledge of how to push the growing mob to its next evolutionary step, and they are known collectively as Oddboyz:

Ingeniously skilled mechanics with the ability to create deadly weaponry and war machinery from little more than scrap and scavenged parts, Meks provide the ‘teknology’ that Orks rely on to spread carnage and destruction across the galaxy. More often than not, these guns and contraptions shouldn’t function in the conventional sense, but that never seems to stop them and has baffled millennia worth of Tech-Priests and Imperial scholars. 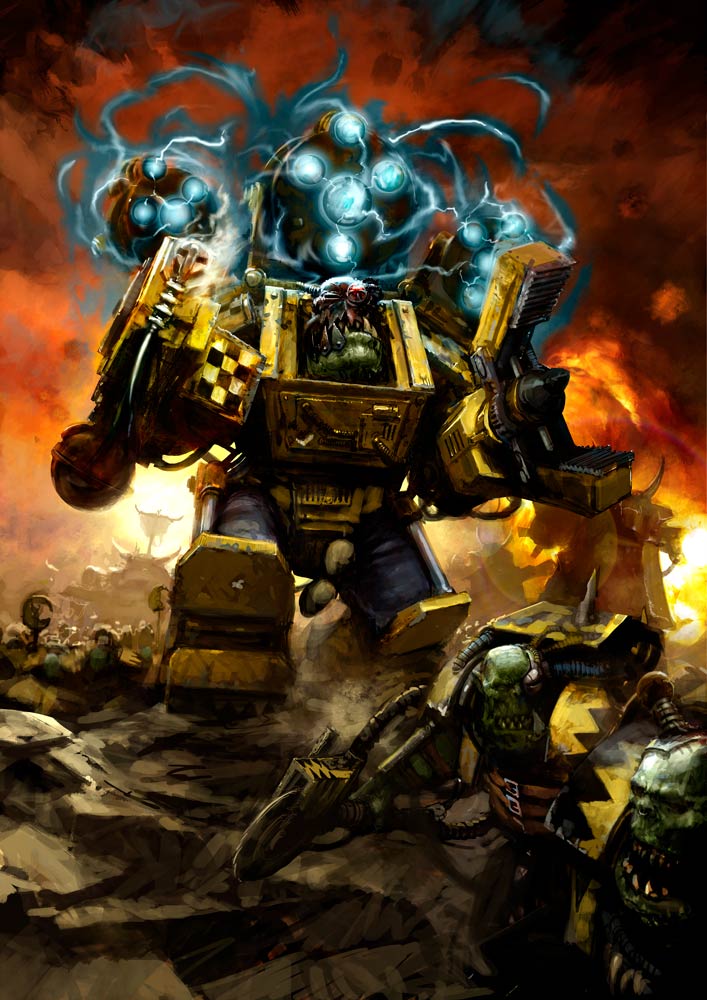 Sometimes referred to as Warpheadz, Weirdboyz are latent psykers who channel the cumulative energy given off by large exuberant Ork hordes into suitably impressive and deadly pyrotechnic displays, from green lightning to giant, stomping manifestations of their deities’ feet! The more Orks there are nearby, the more powerful these manifestations can become. 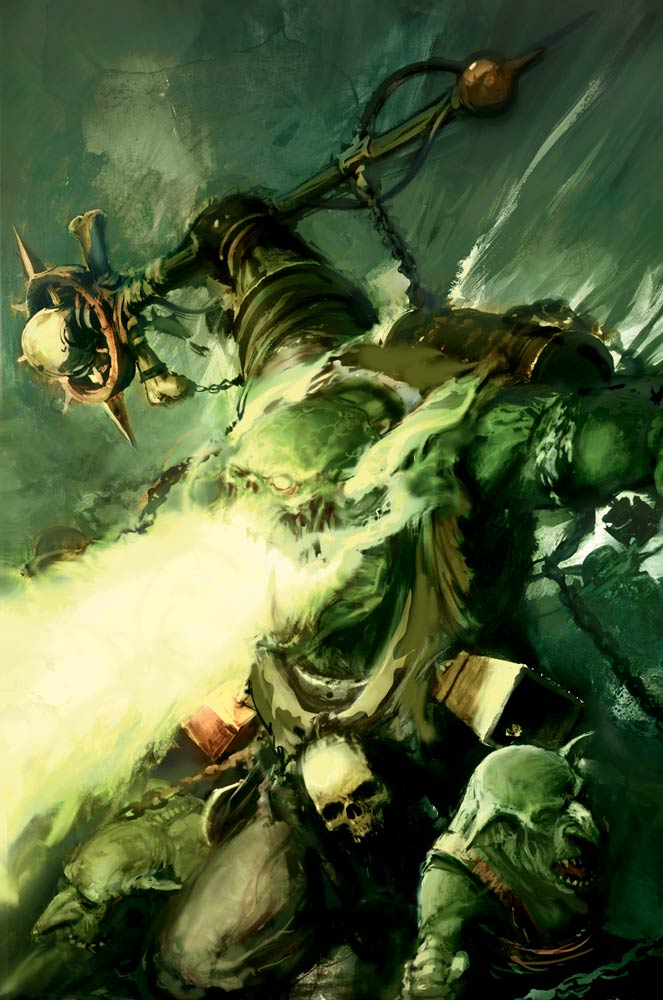 Named for their callous lack of patient care or bedside manner, Painboyz are surgeons who are able to patch up traumatic injuries, or work alongside a Mek colleague to graft mechanical replacements onto missing limbs, to get maimed Orks back into the fight. 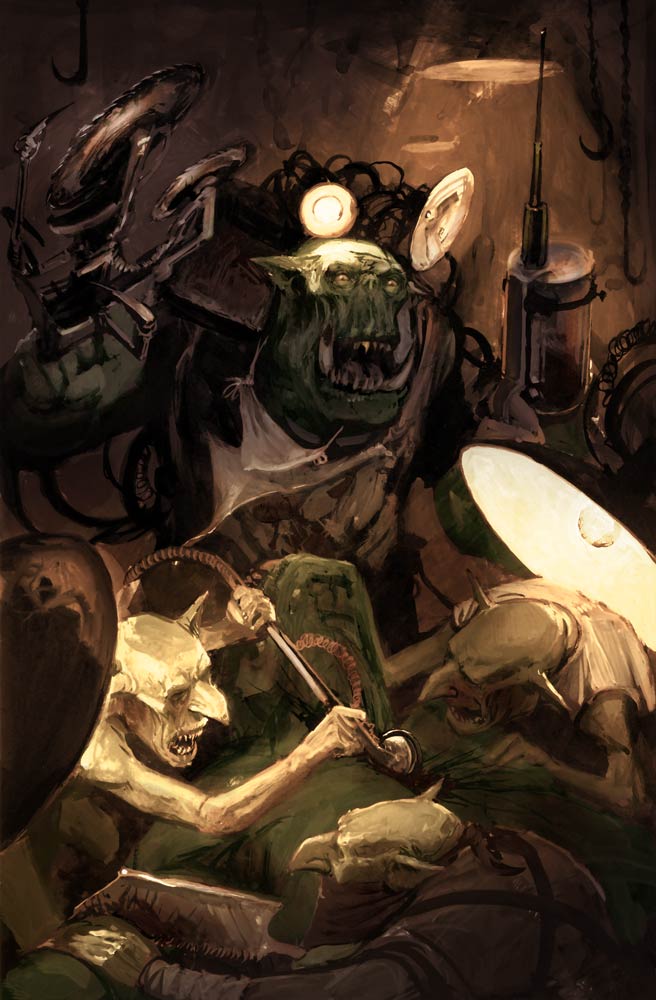 The handlers of the Orks’ diminutive Grot cousins, the Runtherdz have an instinctive talent for goading their charges into doing something useful in battle, be it swarming the foe or bodily clearing a minefield. Runtherdz also serve as the cultural history keepers of the Orks, for they are born with an ancestral memory of past events and the deeds of their clan – not that anyone listens to them.

You can’t learn about Orks without learning about the Waaagh! Ork tribes and clans are unrivalled in the swiftness with which they can develop, rapidly changing from a warband of savages armed with scavenged and improvised weapons into a deadly, space-faring invasion force able to bring whole planetary systems to their knees. Once the population has reached a critical mass, its (now towering) Warboss will launch a Waaagh!, named after the ferocious Ork war cry that has terrorised the armies Mankind on battlefields beyond counting. The Orks will mobilise and unleash total war on their nearest prey, taking to the stars aboard flotillas of crude ships once they have scoured their current location of everything worth fighting. 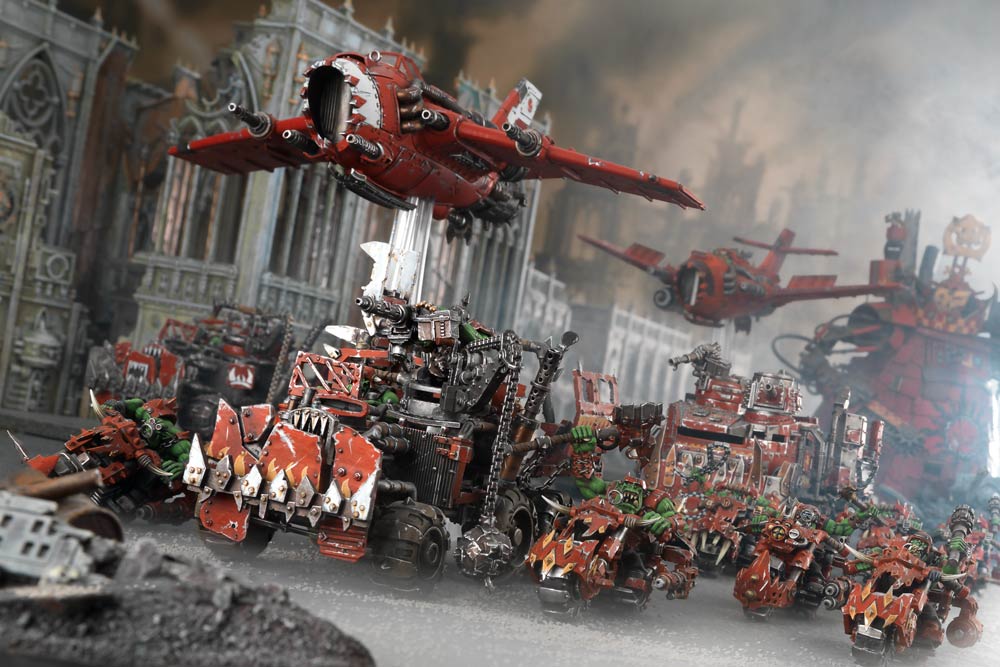 Sometimes referred to as the ‘green tide’, the bigger and more successful a Waaagh! is, the more Orks it attracts, sometimes from systems away. No one is certain exactly how this occurs or by what means other Orks find out about a Waaagh!, but it appears to take place on a subconscious, even instinctive, level. Buoyed by this steady stream of reinforcements, once a Waaagh! has begun, only the most horrific losses will deter its advance. More often than not, this will be due to the Orks losing their enthusiasm for the fight rather than ‘losing’ in the conventional sense. This is sometimes the result of the death of their leaders and the subsequent in-fighting, and sometimes they just get distracted or find a better fight. In any case, entire worlds or even star systems will have usually been destroyed by the Waaagh! before enough forces can be mobilised to inflict a meaningful defeat against it.

In battle, Orks fight in the simple manner of their gods – the cunning brutality of Gork and the brutal cunning of Mork. More often than not, this sees them perform various types of headlong charges into their intended victims either on foot or on the back of sturdy transport vehicles. After all, the only thing that Orks enjoy more than firing guns, blowing stuff up and racing at dangerously high speeds is fighting in combat. War allows them to freely indulge in most – if not all – of these favourite pastimes, which is why they love it so much!

Since the emergence of the Great Rift, the wars that have erupted across the galaxy in its wake have seen the Orks in their absolute element. One of the largest conflicts has emerged on Vigilus, with Warlord Krooldakka’s invasion giving rise to a Speedwaaagh!, a Genestealer Cult insurrection and, more recently, an Aeldari invasion as well. The escalating conflict has seen more and more Orks drawn to the sector in search of a good bust-up. 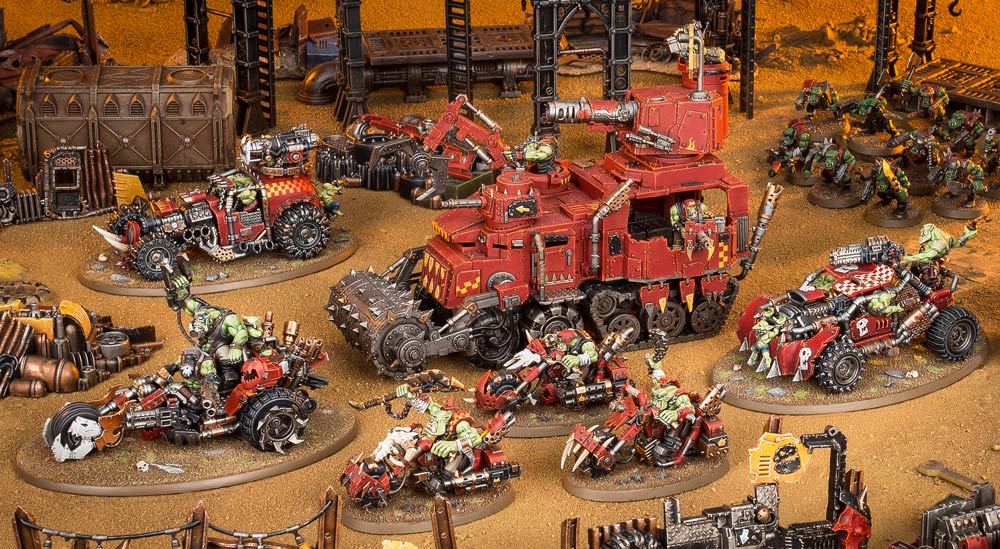 That pretty much covers an overview of the Orks for the moment. Over the coming weeks, we’ll be investigating the six major clans of the Orks and their respective kulturs in greater detail, as well as the ancient legend of the Brainboyz and even more besides.

17 Responses to “Orktober has Begun!”