Not quite Doom Rider, but coming as close as the current codex will allow- it’s Chaos Bikers! Click below to read on, or check out the Tactics Corner for more reviews and strategies.

Chaos Bikers, like many units in the codex, are largely just a one-to-one translation of the Bike Squad from the loyalist codex; they share most of the same options and upgrades as well as an identical statline and similar abilities. However, that shouldn’t be taken as a bad thing, as bikes are still a solid choice for a lot of roles and can throw down some pretty scary firepower in the right circumstances.

Chaos Bikers serve the army largely as a fast harassment force, putting down a combination of shooting and melee while having the potential to carry a whole lot of special weapons packed into a very small unit. They come with a fairly standard Marine statline in most places, although thanks to riding a bike they benefit from an extra wound (for a total of two) and an extra pip of toughness. With a base movement of 14″ they are among the fastest units in the game even before taking their special rules into account. 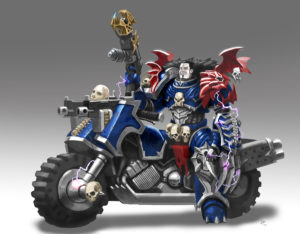 Every bike comes as standard with a Combi-Bolter on the front of it and and a Bolt Pistol for the rider, plus Frag/Krak Grenades. Riders can replace their Pistol with a Chainsword- which they absolutely should, as the bonus attack will get you far more mileage than the possibility of sometimes getting a shot off. Two of the bikers can also add an item from the special weapons list to their array, or if you’re a dumb idiot they can trade their bike’s gun out for said special weapon. (Given this only saves you 2pts and denies you a very useful gun, you shouldn’t ever do it.)

The squad champion has access to the usual wargear list, which can include putting a combi-weapon on him- giving you the potential for six Plasma shots and fourteen Boltgun shots coming out of a single three-strong squad. As standard, Melta and Flamer are also options , giving you a good array of different tools to hit most targets- though Plasma will typically still be your default weapon. The champion can also select melee weapons if you like, though these compete with the combi-weapons for slots and so will usually be reserved for larger (5+) units- here, a Power Axe or Fist is often a solid choice.

Finally, one member of the squad can take an Icon; again, this is typically only worthwhile for larger units, but at 10pts almost all of them are worth using. Rerolling charges is excellent, as is penalizing enemy Leadership (especially since Chaos has several ways to play off of Leadership in general); a small chance of mortal wounds isn’t huge, but will be nice when it triggers, and +1 to your own leadership is always handy to have. The only one I would generally avoid is the Slaaneshi Icon, as triggering Death to the False Emperor more often is just too narrow an ability unless you know you’re going to be fighting Imperial armies for certain.

Chaos Bikers come with two special abilities- first, the previously mentioned Death to the False Emperor, granting them random bonus attacks against Imperial units, and second Turbo-Boost, which ensures that whenever they choose to advance they always move a full 6″ extra, rather than rolling a die. 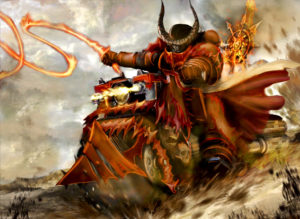 Chaos Bikers, although not an exceptional choice in a competitive sense, are certainly a more than passable one- they come relatively cheaply, have multiple wounds, are very quick on the ground, and can carry up to three special weapons. All of these are very valuable qualities, and as they benefit from the various Legion traitsyou have a core of solid functionality to build the unit around if you end up needing them.

One potential concern is that they compete with Raptors, who can bring an equal number of special weapons and have the ability to play the reserve game- very handy when trying to deploy a suicidal Plasma or Melta squad into the enemy’s field. However, while Raptors are cheaper per model, they are actually more expensive as a unit (having a minimum of five rather than three) and don’t come with the additional wounds, toughness, or Boltguns, so Chaos Bikers end up having some fairly significant advantages to consider. (This is not to say that Raptors are bad, only that there are reasons to consider each over the other.)

There are two main reasons you’ll probably be looking at including Chaos Bikers in an army overall- either you want a fast-moving unit that is capable of performing both shooting and assault duties, or you’re needing to fill your Fast Attack slots (for a Brigade or Outrider detachment.)  In the former case, Bikers can sit well alongside the many other quick units in a Chaos list to make a very aggressive army that moves forward quickly and puts a lot of pressure on the enemy from very early in the game. The key here is not to leave the Bikers unsupported- although they are comparatively tough, concentrated fire from heavy weapons will bring them down quickly, and even basic infantry weapons will be problematic when pointed at them in numbers. If you can put enough threats on the enemy’s doorstep immediately, they won’t have the luxury of aiming all their guns at the Bikers without leaving themselves exposed to your other threats- so as with most armies, the key is saturation of targets. 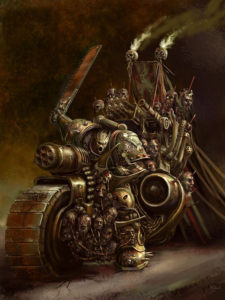 A Brigade, on the other hand, isn’t so much looking for a specific unit as it is anything that comes in the FA slot and does a reasonable job of performing in a list. Here, Chaos Bikers have one other main competitor, the Chaos Spawn. Spawn can come extremely cheaply (33pts to fill a slot is about as inexpensive as you can get with any army) but are significantly less useful than the Bikers, as they don’t really do anything aside from tie units up or throw in a couple extra damage to an existing combat, whereas the Bikers can carry quite a bit of firepower to most anyplace you need on the battlefield while also being a decent unit for tying down shooting units in combat. If you have the points, the Bikers are obviously the better choice- but of course points are always the bane of a competitive list, so this may not always be an option.

While I won’t bring up their interactions with every single one of the Legions’ special rules here (as I think the reader can easily intuit most of them from a simple reading), a couple of them deserve special attention for their interactions with the Bikers’ own rules. Black Legion, although typically a bit lackluster overall compared to some of the “premiere” Legions, can make very good use of Chaos Bikers because of their plethora of Rapid Fire guns. With each bike carrying at least one Combi-Bolter plus several special weapons (likely plasmaguns) and a Combi-weapon on the champion, the difference between not getting to shoot at all when you advance and getting to shoot those 12+ shots is pretty huge. Turbo-Boost also gives you a much stronger incentive to be advancing during the course of a game, making Black Legion a surprisingly-strong candidate overall.

Renegades are the other Legion that benefits them greatly- the ability to advance and still charge is a tremendous one, and with 20″ total of movement this means that a unit of Chaos Bikers can be in the enemy’s face and assaulting them almost immediately  regardless of deployment type or other factors. Although this does mean giving up most of your shooting (unless you equip them with Melta weapons- highly recommended), getting those early charges is well worth the cost, especially if you dedicate them to Khorne in order to give you even better chances of making it to the enemy. 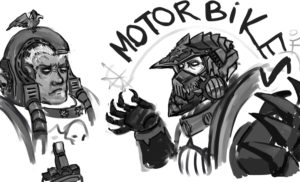 Although not a unit that has caused a big stir in the community as yet, Chaos Bikers are a very solid choice, able to perform in a number of different roles quite effectively. They showcase the philosophy of 8th Edition at its best, trying to make every unit in a codex viable without making them particularly overpowered- and in this regard, they succeed admirably, as they are quite good when used right but not so much so that they can be counted on to carry the army’s entire weight on their backs. Whether taken as a couple of small units to harass the enemy’s flanks or the main body of a force to threaten them with overwhelming speed, Chaos Bikers make for a very solid inclusion into a variety of forces.

As always, remember that you can buy Games Workshop products from Frontline Gaming at a great discount every day.