Hello everyone, Danny from TFG Radio here to talk about an iconic choice for Tyranids, the humble Tyranid Warrior. As always, check out Frontline’s ever expanding Tactic’s Corner. 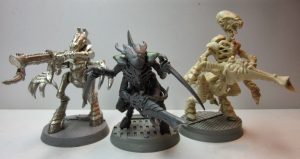 The Tyranid Warrior is a jack-of-all-trades unit that has a lot of customization. Whether you want a backfield Synapse anchor, a shooting unit, or a melee unit, the Tyranid Warrior can do quite a bit, with the usual Tyranid pitfalls of course.

So Warriors have a big list of upgrades and gear, and this gives them the option of going one of two routes: They can arm up and be a shooting unit or they can bring out the swords and go for pure melee. With 3 attacks base, they can make use of the combat upgrades, and with inherent WS5, they are more threatening in melee to the average trooper than they are shooting with their BS3. That said, each Warrior is going to shoot 3 times a piece regardless of what gun you give them, so with enough dakka, they can still do some work.

The basic Bio-Cannons are a bit meh although they are the longest range guns that Tyranids tend to get, and a large blast, pinning, bolter shell is not entirely terrible in Tyranids. For once, the upgrade is not that expensive, so it is definitely worth it to take the Barbed Strangler if you are going to go for a shooty unit. Loading them up with Deathspitters and a Strangler give you a lot of S5 and then a large blast for S4 can wrack up hits.

If you want to upgrade them into melee beatsticks, Boneswords are great for AP3 and the chance for Instant Death while Lashwhips let them swing before most characters at I7. Even just going cheap and going for Rending with Adrenal Glands can do some work. With Flesh Hooks, Warriors get to ignore the charging into cover penalty, which is rare in the Tyranid world, so that is something to consider. Of course, once you start upgrading, you start going up in points, and well, they aren’t cheap to begin with. We’ll get into all that in a bit. 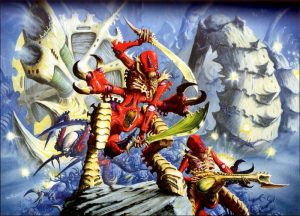 So you have only a few Special Rules here, but they are important. With Synapse, Warriors are the only Synapse available via a Troops choice (besides Scuttling Swarm Tervigons), and for just under a 100 points, you can get some Objective Secured backfield Synapse beacons. This is clearly what they are meant for in terms of the their general purpose in the Hive Fleets as they are supposed to be keeping the little bugs in line. They are meant to be a bit more disposable than Tyrants although in the current meta and gamestate, they are generally too fragile to be front line commanders.

As always, they spread the loving touch of the Devourer with Shadow in the Warp, and if you want to try to load them into a Tyrannocyte, you can only take 6 at most.

If you play Kill Team, Warriors are great as they are tough (for Kill Team) and provide much needed Synapse. They are almost an auto-include, and hey, Kill Team is fun and bugs are way better in it. Just saying.

Anyway, let’s see how we can get make these middle-management bugs get to work:

So, if you see Warriors on the table, most of the time they are hiding somewhere in the backfield to act as Synapse anchors. This isn’t an entirely terrible use for them as for under a C-note, you get 3, 3 wound models that can fight well and shoot ok. They make a great objective camper as they are usually Obsec, and against small, annoying outflanking units like Scouts or a minimum Tactical Squad in a Rhino, they can hold their own. Any dedicated combat unit will pick them up easy enough, but they are there to be cheap, Obsec Synapse for your army, and they are great at babysitting Biovores or Exocrines. With stock Devourers, you get 9 shots at S4, which isn’t amazing but for a backfield camper, it is not terrible either, especially as they are assault, so you can charge in if need be after a volley. Using them in the Living Artillery Node is not a bad idea as they can hide while Biovores/Exocrines get to reroll their scatter or if you take a Barbed Strangler, one brave Warrior can peak out of hiding to get a reroll to its scatter.

You can also load up for war and be kitted out as sizable shooting unit. With a maximum unit size of 9, you can load up with 8 Deathspitters and a Barbed Strangler for a decent amount of shooting within 18 inches. You can go smaller and aim for 6 to load up into a Tyrannocyte and drop down to pump S5 into rear armor, which can be useful as Tyranids lack a lot of ranged Anti-Tank, and 6 Warriors is not the easiest unit to shift without dedicating a decent resource. If you go this route, you can take 5 Warriors and throw in a Prime for BS4 for the whole unit. This does get pricey though.

You can also send the Warriors to go collect some biomass the old-fashioned way: with tooth and claw. This is probably the best way to make use of the inherent strengths of the Warrior stat-line as they have WS5 and 3 attacks base, and for only 5 points a model, you can give them rending and an extra CCW for 5 attacks on the charge each. Warriors also have access to Flesh Hooks, so they are one of the few Tyranid warriors that aren’t totally screwed by terrain. You can also give a few Boneswords and Lashwhips for AP3, striking at I7, and the chance for Instant Death. This can make a unit of Warriors relatively scary as they can pump out quite a bit of rending, some AP3 attacks, and they can strike before most units in the game. If you throw in Adrenal Glands, suddenly they are Fleet and hitting at S5 on the charge. A unit of 6 is then pumping out 30 attacks with majority rending, a few AP3 attacks at higher initiative, and all of this at WS5, so hitting a lot of units on 3+. If you take the Endless Swarm formation, this isn’t too bad a load out as the Warriors can march out with all the little homies around them, and then you can try to for threat saturation. You can also have them outflank via Hive Commander, and that can help them get to where they want to be, and remember: probably Obsec.

So why aren’t Warriors everywhere on the table? The usual Tyranid problems. First, the cost is a factor. A Warrior with Rending Claws and Flesh Hooks is about the cost of a Terminator for a lot less survivability and overall kill, and if you start throwing in Lash Whips/Boneswords, Adrenal Glands, and all that sweet kit, you are spending somewhere around 60 points a model. That’s bad. While they could be workable at dirt cheap with just Rending Claws and Talons, you are still spending a good deal of points on a small unit. Warriors loaded for shooting are also not entirely cheap, and they are still mostly effective at only 18 inches, so if you throw in a Tyrannocyte, that’s a big chunk of points, and if you want a Prime to make them more effective, you are spending a lot more points and taking up a valued HQ slot.

Speed is a factor here. They have to walk, and even with Fleet, they are not going to get into the fight anytime soon, and a lot of other melee units will be able to charge them first. With a Tyrannocyte, you can get right into the middle of the fight, but they can’t charge out of it, so well, you need to survive for a turn. Outflanking them can work, but again, they can’t charge out of reserves, so they still have to survive for a turn before getting to do something.

Coupled with this, Warriors have no real means of tanking damage. They rely on having 3 wounds a piece, but with only a 4+ armor save, they are easily gunned down by even moderate fire. They have no way to get an invulnerable save, and they could perhaps get Feel No Pain from Catalyst, but then that’s not much and relies on other Tyranids helping them out. Of course, S8 is not entirely rare in the world, and these bugs go pop pretty easy. Even the maligned Leman Russ Battle Tank can easily pick up a few in one volley, and while Missile Launcher spam is a thing of the past, melta spam is still here, and well, goodbye Warrior. A big brood of Warriors packed by Catalyst and a Venomthrope/Malanthrope may be its tankiest, it is still not that tanky, especially in close combat where S8 powerfists are to be expected.

So overall, Warriors are actually decent melee fighters, and the ability to have Obsec Synapse can be quite helpful to Tyranids, but their cost and lack of defense make them a bit of a liability. In a competitive play, these bugs are probably destined for the shelf or as a formation tax for Living Artillery Node or Endless Swarm, which aren’t the most competitive formations, at least that we’ve seen. In a friendly game with some toned down lists, or in a Kill Team game, Warriors have their place. I really like Warriors in Kill Team actually.

Thanks as always for sticking with me, and I’ll be moving through Troops for a bit, and as always, check out TFG Radio.
And as always, Frontline Gaming sells Games Workshop product at up to 25% off of retail, every day!

Leave a Reply to Troy Graber