Hello everybody, Danny from TFG Radio here again to continue our trek through the leaders of the swarm, and today we look at the king of the Carnifex, Old One Eye. Of course, you can always check out Frontline’s Tactics Corner for all the best ways to roast such a big bug. 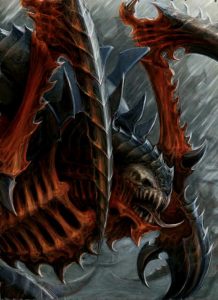 So, if you don’t want to just spam Flyrants, you can bring out a unique HQ choice who has been around in the fluff for a long time. If you want to spice up your games and bring out a seldom used model that can actually surprise people, check out Old One Eye. He is a melee beat-stick, and he is capable of ripping apart most things with an armor value, and he is a bit more resilient than the average Carnifex thanks to a few special rules.

Regeneration: At the end of each friendly turn, you roll a D6 for OOE if it is at less than its starting wounds. On a 4+, it heals 1 wound.

So what you can see here is that Old One Eye has all the upgrades. With Crushing Claws, he gains armourbane, and at base Strength 10 already, that means he on average dice, he is scoring penetrating hits on any vehicle in the game. Heck, on below average dice, he still punches anything, and he can only biff a roll against AV 13 or higher. The Thresher Scythe is really just a minor bonus. It doesn’t add much, but one extra attack that can help clear a larger, squishier unit is never a bad thing. Regeneration is essentially a better It Will Not Die, and it can help OOE regain some wounds and keep it in the fight. 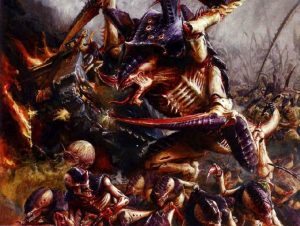 Alpha Leader: Any friendly unit within 12 inches can use Old One Eye’s Leadership for any Morale or Leadership tests they are required to make.

Berserk Rampage: Every successful to hit in melee generates an additional attack. These attacks do not create new attacks.

Fearless: Not going to run away or be swept in combat.

Instinctive Behavior (Feed): If out of synapse, OOE makes a Leadership check. If it fails, roll on the Feed chart. As OOE rides solo, this really only means that it will have to charge the nearest enemy model or if you roll a 6, you at least get Rage for the turn.

Warlord Trait: Adaptive Biology: If OOE suffers a wound, at the start of your next turn, it gains Feel No Pain for the rest of the game.

There is a whole lot of beat down here. Berserk Rampage essentially lets you up to double Old One Eye’s attacks, and all things going perfectly for it, OOE can generate up to 14 attacks in a single round of combat (5 base + 2 for Rage if it fails Instinctive Behavior and rolls a 6, then doubled if all attacks hit). Not too shabby. D3 S10 Hammer of Wrath isn’t too bad, and you could theoretically pop a Dreadnought at initiative 10. While none of these hits can instakill armour unless it is Open-Topped, it can still strip off a few hull-points. Alpha Leader is why OOE is an HQ choice: You could theoretically run a Synapse free army with it at the head as Leadership 8 means a bit more than half the time, units don’t fail their Instinctive Behavior test, but then, that’s still not great odds. OOE’s Warlord Trait is ok. Getting Feel No Pain plus Regeneration can keep it in the game a lot longer, but your opponent gets a shot at it first, and well, with only 4 wounds, it isn’t actually that hard to kill OOE in one round of shooting.

So, how do you use Old One Eye? It is a melee beatstick more than a force multiplier, and it is best at absolutely destroying any armor. Even Superheavies like Baneblades have to live in mortal fear of OOE as it is quite capable of one-rounding just about anything with less than 9 Hull-Points or so. Strength 10 Armourbane is quite simply absolutely bananas. With this in mind, Old One Eye should be hunting just about anything on a tread.

At T6, 4 Wounds, with a 3+ armor save, Feel No Pain (a turn after taking its first wound), regaining a wound a turn on a 4+ each turn, there is a fair bit of resilience here although let’s be honest, nothing that is going to survive any real, dedicated firepower such as Grav, Riptides, and Wraithknights. What OOE is best at is resisting chip shots and half-hearted attempts. If the enemy doesn’t take it seriously and does not dedicate to its destruction, Old One Eye has a nasty habit of coming back to haunt a game. Of course, if someone does dedicate to killing it, it really isn’t that hard.

A big problem with getting OOE to do what it likes to do is that it is so low initiative, and while it still strikes before powerfists and stomps, in this day and age of Knights and Wraithknights, D-weapons at initiative 4 or 5, OOE is not going to be able to tangle with the most common threats that it is really built to kill: Superheavy vehicles. A standard Knight will kill Old One Eye well before it gets to swing as it has no invulnerable save at all. This is bad news bears, and you are far more likely to see Knights of some variety rather than Baneblade on the table. There is one combo that helps: A Harpy. With its Sonic Screech special rule, if you can put both a Harpy and OOE into a Knight, OOE gets to swing first, and against anything but a Daemon Knight with Grimoire up, OOE is going to kill the Knight before it ever has a chance to swing. OOE only moves 6 though, so how ever will it get the charge first? A screen or tarpit of termagants will answer this question. This is part of the problem with OOE in general: it is slow, low WS, low initiative and without a layered defense to keep it in the fight against threats that it was really built to kill. You have to support it to really make it work, and that’s a lot of investment into a single model.

Another tactic is to reserve OOE or use a Tyrannocyte. Dropping it into the backfield can wreak havoc, especially if your opponent has committed their strongest forces to the center. If you have another Bug as your warlord, rolling on strategic might get OOE infiltrate, and either starting another 6 to 12 inches up the board or outflanking into the enemy backfield isn’t too shabby. Having OOE walk on in turn 2 or 3 may keep it out of the fight for a while, but this might be worth it if your opponent has a null deploy style army that drops in later and into your own deployment zone. OOE can walk on and immediately provide a powerful melee force, but this is super situational. As it is so expensive, you have to make sure that you are getting the most mileage out of OOE, and sometimes, that may mean sparing it for a few turns to keep it alive long enough to impact the board. The one bonus of dropping OOE unsupported into the backfield is you at least have an additional 12 inch bubble that isn’t Synapse, but it certainly helps. Leadership 8 is ok odds that a good chunk of your units won’t fail their IB test.

In general, you want OOE to march up the board and hunt armor, and if paired with a gaunt screen as well as some Venomthrope/Malanthrope action, it can survive for a bit of small arms fire, depending on the matchup. Is OOE the best HQ pick in the book? No, and in a purely competitive realm, a standard Carnifex with Crushing Claws is more efficient, but then in a purely competitive realm, it is hard to justify a Carnifex at all.

So while OOE may never see the top tables of a major tournament, it still brings a lot of wallop, and in the hands of a savvy general, OOE can prove to be devastating. As always, feel free to head over to TFG Radio or just come say hi to us at LVO.

← Signals from the Frontline #497: The Return of St. Celestine?
Chapter Tactics #16: Analyzing the LVO Meta With Brandon Grant →

Leave a Reply to MagicJuggler