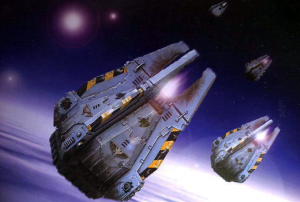 Hello Overwatch from Capture and Control, or Salty John as listeners to TFG Radio may know me here again. It turns out I know a thing or two about playing Drop Pod armies.

At least according to Reece and Frankie. Recently a watcher/commenter of Signals from the Frontline asked Reece and Frankie about what Drop Pod lists are good to use. Reece referenced that I’d had success with the new Blackmanes and prior to that I’ve been almost an exclusively Drop Pod army player for 3 years. I wrote a previous article on Null Deploy armies that talked a lot about Drop Pod armies which you can find on Capture and Control and TFG Radio. Here I would like to discuss 3 lists I have had success with. Hopefully I can avoid setting off any internet landmines for Reece and Frankie this time around 😉

There are two basic ways I’ve run my Drop Pod army successfully. I piloted one version to a 3-2 showing at the Bay Area Open last year and I’ve used an Ultrmarines version with great success locally. The third is my new Blackmanes list which I love but haven’t had any tournament success with, as I haven’t played any tournaments with it yet. 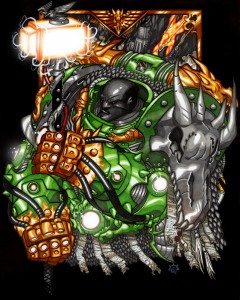 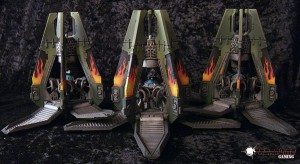 I built this list to be as close to the Salamanders list I’d been playing throughout the beginning of 7th edition. I left at the tail end of 6th edition because I wasn’t having fun anymore. 7th, and playing a Salamander Drop Pod army brought me back. The new SM codex dropped only a month or two before BAO 2015 so I didn’t want to change my proven formula completely. It does what most good Drop Pod armies do, drops in and hits you with a lot of twin linked shooting, Grav, and High Str weapons. With this list I beat 2 of 3 Battle Company lists I faced plus a Mechanicus army. I lost to a near mirror match in a Drop Pod heavy Battle Company and to Necrons. What I like about this Drop Pod army is the flexibility it gives you. All the constantly twin linked flamers and melta mean Doctrines are less necessary.

The Command squad I found to be an excellent “stealth star”. In three games I was able to get Invisibility, Endurance, and Forewarning which made the Command Squad plus Vulkan and 3 Librarians a tough little unit that could also dish out some pain in both the shooting and assault phases. It surprised several opponents over my 3 months playing it. The other thing I liked was the ability to summon daemons if necessary with the Conclave. It has a hard hitting Alpha Strike, plus Psychic shenanigans and protection, some unexpected goodies in the form of the “stealth star” and summoning were great as well. The list was surprising to many people. When they came around the top tables round 3 of the 2015 BAO to get the lists from us to post once the round was over the guy from FLG who asked about the lists was shocked I wasn’t a Battle Company and had a CAD. I feel the exact quote was “Wait, what? You have a CAD in there? Let me see.” Anytime you can be unexpected it pays off, even if I did lose that game and lose out on the top 16 as a result. 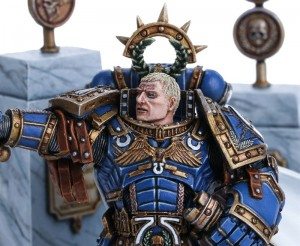 This is probably more indicative of a “standard” 7th ed Drop Pod army. You’ll notice some similarity to the Salamanders list above but with the inclusion of some more shenanigans. The Ultramarines Battle Company is a pretty standard build given the UM get so many Tactical Doctrines. The need for all the “natural” twin linking through Vulkan is not as necessary here. When you can Tigurius, you Tigurius, no need to explain further. What this list does is insert a bit of the unexpected through the 1st Company Task Force. The task force gets to nominate a target unit to re-roll to hit against which can be great to hunt out a Warlord. But the best part for me is the leadership penalties. If an enemy unit is within 12 inches of 3 units from the formation (Drop Pods count) then that unit is at -2 leadership. Not takes tests at -2 leadership but literally has a Leadership value of 2 lower than normal. I’ve used this to run units off the board before, especially Eldar Jetbikes when they move those 3d6 inches straight back! The other bit that is unexpected is when you can use this in concert with Psychic Shriek. It can help you to put a Wraithknight, Stormsurge, or Deathstar out of commission early on in the game. Overall this is probably my favorite way to play Drop pods in a Vanilla Marine list.

Next we’ll tackle what Reece was referring to, and which I got a few emails about, the Blackmanes. The new Space Wolf supplement, Curse of the Wulfen, allows for the use of Legendary Greatpacks of which the Blackmanes are one. If you take a Blackmanes Greatpack you can take Drop Pods for Free, in addition those Drop Pods all come in on Turn 1. No need to roll. This led me to the following idea for a Blackmanes list. 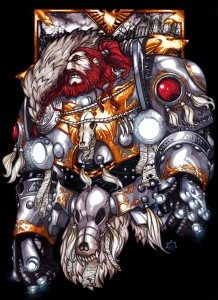 The idea behind this list is to give me 9 Drop Pods and 2 Assault Squads on turn 1. It’s a massive Alpha strike army with some big teeth. It hits really hard turns 1 and 2 but peters out quickly if it gets bogged down or my opponent is able to run enough of the army away from me before I can cut it down with Turn 1 Shooting and Turn 2 Assaults. The Deathwinds are surprisingly good at taking out large amounts of chaff units like Guardians, Firewarriors, Marines. This list nearly got me the dream Turn 1 table win. Blackmoor reserved a good portion of his Eldar army against me and my turn 1 drop killed, or caused to run off the board, all but his single DCannon battery. He ultimately won on turn 7 because I lacked the mobility to effectively go after his reserves when they arrived but it was my game until turn 6 because the Alpha strike is so strong. What I like about this Drop Pod list is 9 pods all coming in turn 1. With the prominence of Tau in the current meta and all the Interceptor fire they throw out I had found the DP lists I had been running no longer cut the mustard. They just weren’t survivable enough. With this list the 9 pods and two assault squads present Tau players with several tough decisions, and if I can hold up key units with first turn charges from the two assault squads I can follow up with Ragnar and the Bloodclaws who are no slouches in combat, especially if the Wolf Standard is alive still.

What this list lacks is mobility. I know that is a problem with all Drop Pod lists but a Blackmanes based DP army has this disadvantage to a greater extent. With a “normal” or more traditional DP based army you get roughly half the pods turn 1 and the remainder turns 2-4. So while mobility is lacking in normal DP lists you get some wiggle room when your back up pods come in. With the Blackmanes that isn’t the case at all. You get everything turn 1 and are hoofing it on foot for the remainder of the game. In my previous article on Null Deploy armies I made mention of how the army seems like it’s a straightforward list to play but in reality it is more of a finesse army than it is given credit for. I find finesse armies aren’t just delicate; many times it is a list that requires careful planning and execution to play effectively. The Blackmanes are a prime example of this, one wrong drop and you can go from lining up a potential Turn 1 tabling to losing on the bottom of Turn 6 because your foot slogging Marines can’t catch your opponents’ more maneuverable units.

I hope this was helpful to those of you trying to build your own Drop Pod based marine lists, let me know what you think or let me know if you have questions. Hopefully I didn’t step on anyone’s toes this time around. 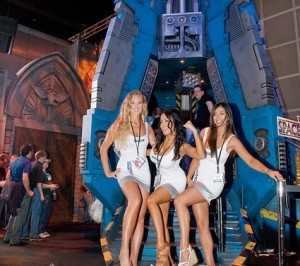 What’s your favorite way to play Drop Pods? And remember, Frontline Gaming sells Games Workshop Product at up to 25% off, every day!

Leave a Reply to Maeglin