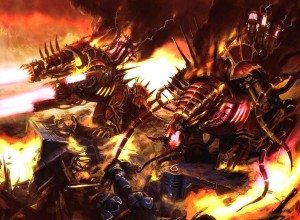 There is nothing more awesome than a smoke belching, gun toting, brass covered, hulking war machine… Really… it’s the reason we play this game… the girls… (kidding!). It’s for the incredible visuals, unbelievable upsets, and… let’s face it… Reece’s sexy voice. There are few models that look as stunning and powerful in the Chaos line than the Forgefiend. Today, I am going to talk about how you can take your Forgefiend off the shelf, put him on the table-top, and make an honest go of it in a Khorne Daemonkid Army. As always, for more great articles, check out Tactics Corner!

In the Forges of Chaos… A Beast Awakens…

Alright, so today we are going to dive right in to a comprehensive review of the Khorne aemonkin Forgefiend. You don’t see this model too much, which I think is sad, it’s an absolutely stunning miniature with some pretty cool abilities. So, I have devised a simple strategy that you can try at home or at the next RTT to amp up your game with the Forgefiend! As I do with all of my articles, I think it is best to simply break everything down and go step-by-step through the few options it has and how it is to best incorporate it into your army. 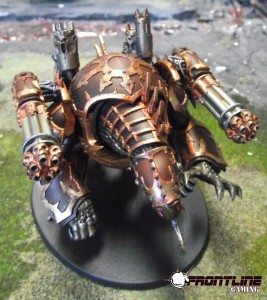 Alright, not a whole lot to work with, but enough for us to get a good handle on a few different ways to play a Forgefiend. Let’s now take each of these options and divide them into two categories “Good” and “Just Okay”, this will help us understand what abilities to focus on when we want to play a Forgefiend. 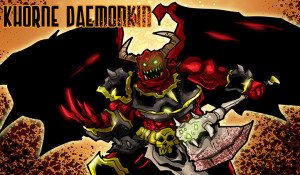 Forge Me Some Narrative!

So, how should we run this thing in your list? You could definitely run him in a Blood Host Detachment; he can be selected as an auxiliary option (War Engine) for the Multi-Formation Detachment and would work nicely as some ranged firepower to back up your faster moving Daemons. The strategy I have devised, however, has the Forgefiend nestled in a Combined Arms Detachment, I have titled this particular strategy the WALL OF DEATH!

The key to this particular strategy lies in an Aegis Defense Line; one of the issues with a Forge Fiend is that it is a shooting unit that has been punished with a lower Ballistic Skill. So, we need to augment that… Ammo Dump time! An Ammo Dump allows models within 3″ of it to re-roll To Hit rolls of 1 in the Shooting phase. The Forgefiend now becomes much more dangerous, the ability to re-roll ones gives you a whole lot more reliability. However, the true power comes from building the Forgefiend with three Ectoplasma Cannons. With the Ammo Dump allowing you to re-roll ones, no longer are you a slave to those pesky Gets Hot! rolls (This should function in a similar manor to Commander Pask and an Executioner Leman Russ). Now, all you need to do is sit behind your Aegis (which will give you a 4+ cover save) and shoot your enemy full of holes, protected from their return fire with your cover save and augmenting your shooting attacks to be ultimately more effective.

Also, if you combo this with the +1 invulnerable save to Khorne Daemons relic, you can have some fun with a 4++! 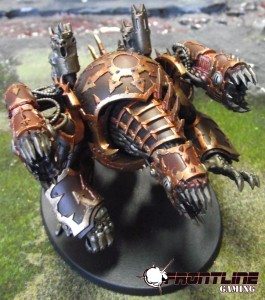 Forge Me Something Cheaper!

This all sounds great… however… the base cost of this bad boy is 180pts!! What the hell is that?! 180 points is really, really steep… A Soul Griner (135 base) is a much better choice if you’re building your list economically. No matter how look at it… this thing is so many points that it can very easily become a liability. This is the reason I suggest running him behind the Aegis, not only can he be parked back there on an objective, but the 4+ cover can really help protect your high point investment. Additionally, there isn’t really much support for them outside the Auxillery choice in the Blood Host Detachment and taking them in a Combined Arms Detachment. What I would love to see is a Formation of them with some crazy rules! Special Rules like “Preferred Enemy” go a long way with units like this, so it doesn’t have to be huge bonuses.

Forge Me Something Awesome!

As I do with all of my articles, I leave you with a challenge. I challenge you to find a way to make the Forgefiend awesome! I’ve given you a way to get him on the table effectively, so now we will see what you come up with! Try the WALL OF DEATH strategy or experiment with your own! Post anything you discover in the comments below, I look forward to hearing what you come up with!

Scuba Steve, Signing Out and as always, Frontline Gaming sells Games Workshop product at up to 25% off retail, every day!

Leave a Reply to bridges60