If you’ve been to a tournament recently, you’ve probably seen the fabled Void Shield making its rounds at many of the tables. Considering how confusing and non-intuitive its rules are, perhaps we ought to take some time to clarify just how this little gizmo works.

The Void Shield Generator is an increasingly-common sight at tournaments; you’ll see them at almost every tournament you go to and especially near the top tables, where a variety of esoteric armies are struggling for dominance with each other. However, originating as it does in an obscure book and having a very confusing and sometimes-contradictory set of rules, many players have only a passing familiarity with Void Shields, even those that actually play with/against them on a regular business. So, in the interests of public service, I though I’d give a quick primer on the subject. 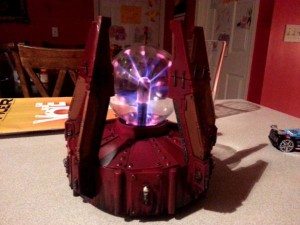 The Void Shield Generator is an AV13 medium building, giving it 4HP. Unlike most buildings it is impassible, meaning that units cannot embark on it- however, it does have battlements that allow you to put units on top of it should you so choose. Since it lacks both weapons and embarked units, most results on the building damage table will not affect it in any meaningful way, though of course it can lose Armor Value or being destroyed outright by some of the results.

All Void Shield Generators come with one automatic Void Shield; up to two additional ones can be purchased for it, for a maximum (and standard) of three. Any unit that is at least partially within 12″ of the Generator is protected by the Shields and any hits on said unit will be resolved against the Void Shield, one at a time, until it is downed and then further damage will resolve against the unit. Blast and template weapons that strike one or more models protected by a Void Shield will instead inflict a single hit on the Shield, regardless of the number of models that would have originally been affected- however, any hits on models outside of the Shield will still be resolved normally. Void Shields never protect against damage in close combat or from shooting attacks that originate within the Shielded area.

Void Shields themselves are treated like AV12 buildings; a glancing or penetrating hit will down the Shield, as will ANY hit from a Destroyer weapon (there is no need to even roll on the Destroyer table.) As per the ITC FAQ, Grav and Haywire weapons cannot affect a Void Shield; a unit under the Shield effectively has 100% protection against such attacks as well as anything that is S5 or less, since those weapons are unable to damage the shields.

When downed, a Void Shield no longer protects units; however, such damage is not permanent and at the end of the controller’s turn any downed Shields will regenerate themselves on a 5+ roll, potentially partially or completely restoring the Generator. 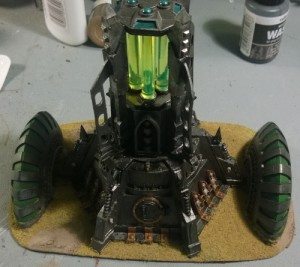 Why Is It So Strong?

The reason that the Void Shield Generator is so strong boils down to a couple points: first off, being immune to an attack is better than being resistant by a large margin. Second, certain weapon types (notably Grav) are disproportionately represented in the current meta. And third, it can shore up a major vulnerability of certain units (namely fragility) while giving an army a strong attrition element.

The big one is immunity- being immune to a certain effect is an entirely different class than merely being highly resistant to it because, as everyone knows, bad dice can always happen. If you are 99% unlikely to be affected by something, every once in a while that 1% will slip in and wreck your plans- but if you are 100% immune, that will never happen. This is the case with the Void Shield- many types of weapons simply cannot affect you no matter how well the opponent rolls or how many of them there are. It doesn’t mater if there’s six Boltguns or six thousand, your units underneath an active Shield simply do not care. This is especially important for infantry units, which rarely enjoy such protections and often suffer badly from being able to be hurt by every weapon in the game.

Just as importantly, however, is the hyper-prevalence of Grav weapons in the current meta. Whether brought en masse as part of a Battle Company, the sudden appearance of a Skyhammer team, or “just” the fifteen Ignores Cover shots from a Hunter’s Eye Centurion squad, Grav is an extremely common sight on the top tables because of its exceptional effectiveness against almost all types of targets. The Void Shield works as a natural counter to this, protecting units from any damage from such weapons- and for expensive targets like monstrous creatures or vehicles, this is especially important. So long as we continue seeing a preponderance of Grav weapons, we can expect to keep seeing Void Shields.

On the final point, attrition, it is important to remember that all armies have to play a balancing game of different factors; units that have high firepower often have low defensive stats in compensation. For units such as these, being able to purchase additional protection- especially protection as effective as Void Shields- is a big deal, since it allows them to cover one of their weaknesses. With an average of one Shield restoring itself each turn of the game (presuming they are all down- and if they aren’t, the Generator is already doing its job) it gives such armies a way to stay functional when a battle turns into a game of attrition.