This time around on the Necron codex review we turn our lens on the ‘Cron who’s got it all, the delusional and affable Nemessor Zahndrekh. As always, you can visit the Tactics Corner for more articles and advice.

You know what the biggest problem with most HQs in most books is? They’re only as large as themselves. That may seem like a strange thing to say, but think about it- you’re paying a hundred points or more for a single model that is supposed to be leading your army, but more often than not they don’t do anything but carry a fancy melee weapon and have fewer wounds than an equivalently-priced squad. That’s not terribly exciting or cinematic, nor does it make for a good army.

Every once in a while, though, a gem shines through- a character who is more than just a pile of stats and mediocre wargear. Nemessor Zahndrekh is perhaps one of the best examples of what such characters can be; although he, personally, is nothing special, his mere presence makes your whole army stronger just for the being. If you’re looking for force multipliers, Necrons are in. 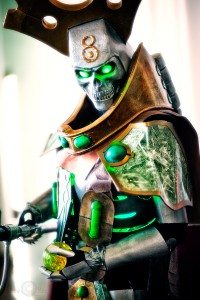 However, don’t let the above fool you- although Zahndrekh’s basic setup is far from his greatest strength, it’s none too shabby, either. He has a standard Necron Overlord statline, meaning WS/BS/Str/T5 as well as three wounds and three attacks. He also benefits from a 2+ armor save, being one of the few models in the book to get it (and without need for a relic, no less!) and has a 4+ invulnerable as well thanks to his Phase Shifter. Combined with Reanimation Protocols this makes him a pretty tough bugger to take down, which is good because he’s going to be our Warlord most every time.

Offensively he is a lot weaker, however- he comes with a Staff of Light (12″ S5 AP3 Assault 3), but you’ll rarely get to use it and to be quite honest, it’s not really that big of a deal at all. More damningly, he lacks any kind of melee weapon at all, being forced to rely entirely on his basic punches in order to get anything done. He may be able to survive in a challenge while the rest of his squad does work, but don’t expect him to take down anything more than a basic squad leader if it comes down to a fight.

As I said earlier, though, Zahndrekh’s real strength doesn’t come from what he himself does- it comes from the things he enables the rest of your army to do. In this respect he has two big abilities contributing to his functionality, Counter Tactics and Adaptive Tactics.

Counter Tactics, the simpler of the two, lets him “borrow” abilities from any enemy unit that gets within 24″ of him and has a special rule off of his limited list- namely, Counter-Attack, Furious Charge, Hit and Run, Split Fire, Stealth, or Tank Hunters. Should such a unit get in range, he and his whole unit benefit from the rule (or rules) so long as they stay close enough. Obviously some of these are more impressive than others, but there are several pretty strong options in there (especially Tank Hunters, Stealth, and Hit and Run) so it’s very much worth keeping an eye on. Note that unlike the previous version, he cannot take abilities away from enemy units, only gain them for himself.

Adaptive Tactics is the reason most people will take Zahndrekh, though, and clearly his defining ability. Like most named characters he starts with a fixed warlord trait (which gives him Zealot), but starting with the second turn of the game you can pick a new warlord trait for him each turn (or just stick with the one you’ve currently got.) With a huge swath of choices to pick from and no need to rely on fickle dice for getting exactly the one you want, this is truly the tactician’s wet dream- at any given moment you’ve got probably a dozen viable options to pick from. Though Zahndrekh is not allowed to pick the same trait twice in one game, several of the traits off different tables are functionally duplicates of each other in many cases and can be swapped between freely- and since starting with a trait is not the same as picking it, you always have the chance to go back to his original one.

Like all of the other Necron characters, he also comes standard with the Reanimation Protocols and Independent Character rules, for what those are worth. 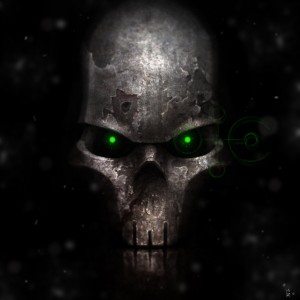 So, what is it we actually do with this? Why, everything, of course!

Let’s start with Counter Tactics. At a first glance, this ability is somewhat marginal; after all, you have no control over what is in the enemy army, right? So while you might be able to pick up an ability here and there (say, when your opponent brings White Scars or whatnot) it’s hardly anything you can rely on. But, as any good generalissimo will tell you, the devil is in the details. Let us remember from our Warhammer 40K rulebook: “Units… that are Allies of Convenience treat each other as enemy units.” Oh! That’s rather useful then, isn’t it? We can not only bring along a useful way to fill gaps in what the Necron army is capable of, but also give free abilities to Zahndrekh and his squad. And since Necrons have only Allies of Convenience or worse, that means we always have the possibility of bringing along some special rules.

Hmmmm. But what other faction could we bring that has an efficient, flexible way to get lots of special rules, but that also compliments our medium-range shooting army well. Hmmmm. HMMMMMMMMMM. 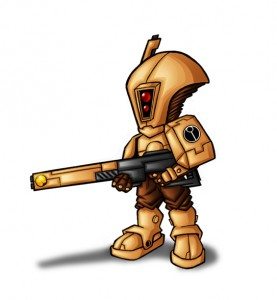 Yes, Tau are not only a great way to complement Necrons normally, they also have access to every single special rule off of Zahndrekh’s list in one form or another- and most all of the good ones in a single unit, no less. The premiere choice here is a Commander (or other model) with a Puretide Engram Neurochip, which lets us pick any of a number of special rules off of a suspiciously-familiar list and apply them to that model- but, of course, if Zahndrekh is around he gets a cute little light bulb over his head every time you do so and says “Hey, I bet I can do that!” and suddenly we have a whole unit of Necrons benefiting from the wisdom of our ancient Tau general. The handful of abilities that aren’t on the Puretide list are available elsewhere- for example, Stealth from Kroot, Sniper Drones, Stealth Suits, and Ghostkeels, Split Fire from Cadre Fireblades, etc. It’s really just a smorgasbord of special rules to pick from.

Let’s take a moment to single out a few of the more useful ones: Tank Hunter is absolutely huge, as it turns your unit of Necron Warriors from being a mild annoyance to most tanks into a pretty brutal machine-murderer. Hit and Run, while unreliable due to the required Initiative test, can be very clutch in getting you out of an unwinnable fight. Stealth can really make the unit extra, extra, extra hard to kill (and god forbid they Go to Ground!) in a pinch. Furious Charge and Counterattack, while maybe not what you want most of the time, can really be scary under the right circumstances- a lot of things are pretty leery of charging into forty shots worth of Overwatch followed by forty melee attacks.

So yeah, Counter Tactics is a really cool ability. On a lot of characters, that alone would be enough to sell them. But guess what? Counter Tactics is the weaker of Zahndrekh’s two main abilities- and that brings us to Adaptive Tactics.

So, pick any warlord trait each turn, huh? Is that really such a big deal? Yes, yes it is- as I said earlier, being able to access a plethora of strategies essentially on a whim and without any need for a roll is a very powerful thing. Let’s just take a quick look at the most useful of them:

Note that, depending on your TO’s interpretation of the rules, he may or may not be able to select from the Escalation warlord traits- however, this is a fairly minor thing overall. Also note that he, like other models, cannot use his abilities (including switching warlord traits) when not on the table- that means if you want to be changing things around, you’re going to need him hanging out somewhere rather than hiding in an airplane.

Putting It All Together

As you can probably see from the preceding, Zahndrekh is a monster of utility; although no one thing he brings to the table is gamebreaking, as a combined package he is resilient, flexible, and powerful- his abilities are applicable in practically every situation and against every enemy. He allows you to cusomize your game plan on a turn-by-turn basis, giving you options when you need them most and bonuses to whatever will be the most effective. He himself may be a bit of a chump, but he makes the whole rest of your army more powerful by his presence and that is worth infinitely more.

Armies planning on using Zahndrekh should be looking to take advantage of as many of his abilities as possible- have a plan for what warlord traits you want to swap into in which situation and make sure you’ve got a good unit for him to hang out in should you be able to trigger Counter Tactics. Zahndrekh rewards those generals who can plan ahead and take maximum advantage of the ability to change horses mid-stream, so don’t lock yourself into one road to victory and he’ll serve you well.

← Signals from the Frontline #388
The Horus Heresy and You – the beginner’s guide! →