Wargames Con is in the home stretch, and we’ve got some great players battling it out for the top spots!

In the end, Pajama Pants beat Darkwynn to win tournament champion. Space curves beat Mike’s Battle Company in a close game to win renaissance man. It was a great event. More details to come later, been busy cleaning up after the event and having post game drinks with friends.

Well, here we go, folks. The final countdown has begun! On the top table is Alan “Pajama Pants” Bajramovic with his Orks and Daemons vs. Nick Rose and his Scouts and Centurions Ultramarines list. On table two, we’ve got Ben “Spacecurves” Mohlie with his Necron death-star vs. Mike McKinney and his Min/Maxed Battle Company with a Culexus and Blood Angels list. Hanging on by the skin of their teeth, we have Thomas “Goatboy” Reidy with his Knights and Space Wolves and Mat Allee with his Endless Swarm Tyranids. One of those genetlment will walk away as the tournament champion!

It’s been a smooth running, fun event and everyone’s got a smile on their face, which is awesome. Only 1 drop from day 1 to 2, which is nuts! Usually we see a higher percentage of no-shows on day two.

We’ve got a ton of the top armies present, with Eldar and Imperial Knights all over the place. Necrons are also very popular and, unsurprisingly, the new Space Marines proving to be quite popular. Space Wolves are also still holding strong with many players either playing all Wolves or having some Wolves allied in to their armies, often to get access to the mega powerful Thunderwolf units. 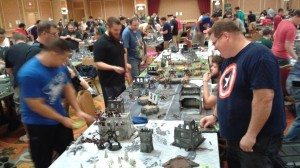 Also, Khorne Daemonkin are present in good numbers, which is awesome! That army has really proven to grab the hearts and minds of tournament 40k players (myself included as that will be my next army after I finish the studio War Convocation army). However, this weekend every time we’ve seen a Daemonkin army run in to the brick wall that is Eldar, they’ve gotten routed fairly quickly. Those Scat Packs are just murderous.

Speaking of Eldar, wow, Jet Bikes everywhere. The most points efficient unit in the game is, unsurprisingly, very popular. Some of the Eldar lists in attendance are just brutal, but, they are not running the tables, which is good. We watched a 5 Knight army get mowed down by Scat Packs though, which was crazy, as the Eldar player Doomed the Knights an then hit side armor with massed strength 6 and cut the Knight army down. Ouch. 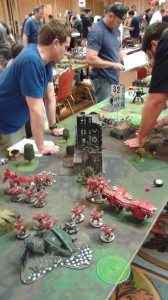 Many of the most skilled players here are playing Necrons, and the metallic undead have proven to be quite good, which will come as no surprise to many that have played them. Most lists feature a Deathstar unit of some type, with crazy defense and a Solar Staff to give that near invulnerability for a key turn, often after the unit has jumped into a position to assault.

Tau are also very popular at this event, and there are many a Firebase Cadre to be seen. Funny, that the first formation to come out is still one of the most powerful. The Tau shooting is still quite fierce and we’re seeing them hanging on in the top tables. 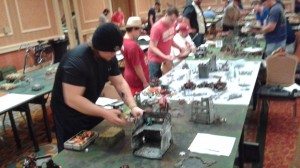 We’ve got a few AdMech armies, although none of them are having the greatest showing, probably due to being so new. Drop Skitarii have been having a rough day and a War Convocation list also, is on the bottom end of the spectrum, so far. In time I expect to see these armies topping the results of events as folks master them. 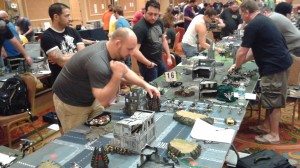 Space Marines are very popular as well, and we have several Battle Companies. I have been keeping an eye on these games are everyone that played them expressed that it felt overwhelming to face so many units, but that they enjoyed the games. Most of the folks asked said the Battle Company didn’t do that much damage, but was excellent at winning missions, which is what most of us expected. None of them made it into the undefeated bracket though (Edit: Mike’s list does feature a Battle Company and is in the undefeated bracket Game 4), as they got bumped out when facing armies with superior kill power or in the kill points mission which proved to trip most of them up. Only Nick Rose and his Scout/Centurion army has made the cut going into day 2 sporting a Space Marine CAD, and Mike Mckinney with his Blood Angels/Space Marine combo.

In the undefeated bracket starting day two, we have: 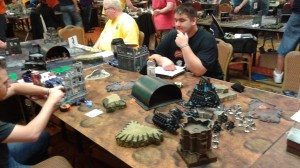 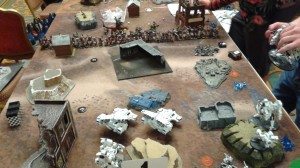 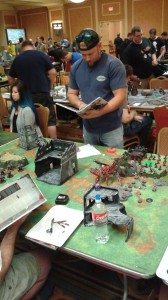 Leave a Reply to Will Grant